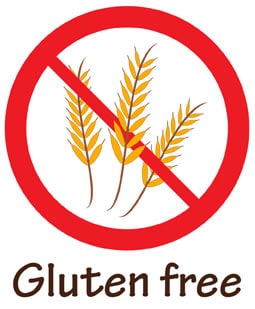 Gluten intolerance, or coeliac disease, is the bummer of all bummers. The gluten intolerance creates a chronic malabsorption syndrome that is the worst of the worst. If someone experiences lethargy, weight loss, loss of appetite, diarrhoea, stools that are bulky, pale, floating or horrendously smelly, abdominal pain or distension, weakness, and or anemia, hello gluten intolerance.

Gluten intolerance, or coeliac disease, can manifest itself very dramatically, causing malnutrition and wasting, or else it many act insidiously to downgrade general health and vitality over a number of years.

Classic forms of this disorder begin early in life, just as soon as cereal grains containing gluten protein are introduced into the diet. In this case, the infant fails to thrive, muscular structures begin to waste, especially if the gluteal (butt) region, and the abdomen protrudes markedly due to intestinal fermentation. Fat absorption is reduced, fat-soluble vitamin deficiency is common, and other necessary nutrients are passed out with the doo doo.

Adult-onset gluten intolerance is often diagnosed and may, in reality, stem from childhood, but with only mild or unnoticed symptoms that gradually progressed for many reasons.

Gluten is a protein found in wheat, oats, rye, barley, and other grains related to wheat. If these are consumed in these cases the gluten causes severe intestinal irritation and a flattening of the mucous membrane of the middle part of the small intestine.

The two main causes of coeliac disease are strict gluten intolerance, which may be caused by enzyme deficiency, another metabolic fault, and/or improper weaning.

The introduction of cereal grains before the body’s enzymes can digest them can only set the stage by causing gastric irritation, antibody reaction, and intestinal thinning.

The average infant is approximately 4 months old at the onset of the disorder and a full 2 months before the body has even developed the digestive ability to handle concentrated carbohydrates. Add to this the frequency with which these foods are usually given in the diet and it’s not rocket science to see how simple irritation can later lead to permanent reaction. The foods most commonly found allergic are those given the earliest and most frequently.

Then, other food allergies like yeast, dairy and/or sugar intolerances can further complicate coeliac disease. The good news is that breastfeeding is a protective factor and can help prevent future food sensitivities. This is why infant formulas laden with fluoride, aspartame and other horrific substances should be avoided during this stage of life.

Believe it or not, researchers have found a significant percentage of schizophrenics and victims of multiple sclerosis who suffer from a gluten reaction. This largely comes from the malabsorption of vitamins (B3 and B6 deficiency are closely associated with schizophrenia) or fat-soluble substances (essential fatty acids found in seeds or nuts are deficient in those with multiple sclerosis).

What has to be instituted initially is a totally gluten-free diet and this could well present a challenge to many households. Down the road some may be able to tolerate some moderate additions, but basically, quinoa, brown rice, millet and non-GMO corn will be the main-stay grains.

Another thing to watch out for is making sure that wheat or wheat flour has not been added to any prepackaged products consumed at home or in restaurants.

Believe it or not, gluten-containing grains are commonly found in a wide variety of restaurant and commercially prepared foods, such as ice cream, candies, salad dressings, lunch meats, soups, sauces, and even condiments. It is as bad as MSG.

One must take great care to pay attention to all ingredients, especially when eating at restaurants. Reading labels should be taken seriously and become your second religion. Even an incredibly small amount of gluten in the early stages of the disorder can initiate a reaction lasting up to 5 days, so you can see how important it is to be diligent about excluding gluten entirely.

Forget about buying gluten-free flour to do your own baking as these products are usually refined and vitamin deficient. It’s best to stick with highly nutritious non-gluten grains, as previously mentioned, along with vegetables, fruit, nuts and seeds. (Please don’t forget that the animals are fed enormous amounts of grains that are the worst of the worst.)

Lastly, be sure that your supplement regimen includes vitamins A, C, D, E, B complex, B6, calcium, magnesium, zinc, slippery elm to soothe inflamed mucosa, superfoods, and organic sulfur to repair all the cells in the body.

In the beginning of the healing process, the coeliac person is thin and has an irritable stomach, making supplements poorly tolerated. You might want to start the healing process with a fresh juice fast of 3 to 5 days, to give the digestive tract a bit of a rest.

Remember, due to prolonged malabsorption, nutritional deficiency is kind of broad-based, so the emphasis should be placed on vitamins A, B complex, C, D, and E (fat-soluble), essential fatty acids, calcium, magnesium, iron, zinc, organic sulfur, and any other supplement that may have become deficient in the process. It’s best to see a naturopath. An MD will only give you drugs.