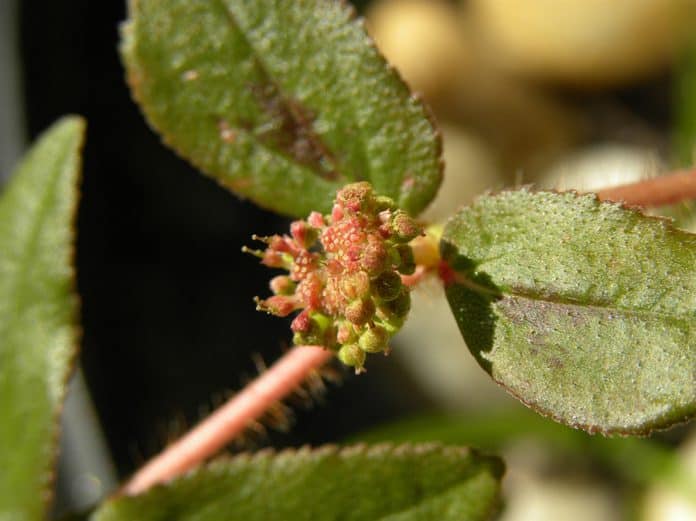 The plant goes by various names. These include:

Euphorbia is a short skinny tree with red leaves and branches. It is indigenous to many tropical regions, and is cultivated throughout the Southern United States, Asia, Pacific Islands, Africa, Central America and South America.

Its beautiful red leaves are hardy in full sun or partial shade. The small branches contain a milky sap which can irritate the eyes and skin for some, so testing is necessary before application. Nonetheless, the sap, leaves and branches have been used as a remedy for several conditions. Here is a list of these, starting with those that have been confirmed in modern research:

A number of studies have shown that Euphorbia herb contains antifungal properties. 2017 research from France’s University of Lyon studied extracts from Euphorbia and found two that significantly inhibited the growth of anti-drug resistant strains of Candida albicans.

Another 2017 study, this from Portugal’s Research Institute for Medicines, studied Euphorbia extracts and found that diterpenes from the plant significantly inhibited Candida growth by changing the fungi’s efflux pumps, which they use to become resistant to drugs.

Euphorbia has been found to inhibit several cancers.

Research from Africa’s University of the Witwatersrand found that extracts from Euphorbia fight lung cancer cells by inducing cell death. The researchers found cell death rates caused by the extracts were consistent with chemotherapy rates.

The research determined that the plant’s compounds were significant antioxidants. But the most significant finding was that the extracts inhibited the growth of human liver cancer cells – hepatocellular carcinoma cells.

About 2% of all cancers are liver cancer, but liver cancer is severe and not often diagnosed early. Only about a fifth of all liver cancer patients live past one year after diagnosis.

Hepatocellular cancer is the leading type of liver cancer. It often occurs when the liver is damaged from alcohol overuse, hepatitis, the overuse of pharmaceuticals, as well as a number of synthetic compounds such as vinyl chloride, herbicides and others.

A 2006 study showed that the plant medicine also inhibited the growth of skin cancer.

Other studies have shown that Euphorbia herb inhibits the growth of several types of bacteria. These include E. coli, Bacillus subtili, Staphylococcus aureus, Pseudomonas aeruginosa and Klebsiella pneumonia.

4. Malaria and other parasites

A 2006 study found that Euphorbia extracts stopped the proliferation of Plasmodium falciparum – the parasite that causes malaria. This was also confirmed in a 1999 study.

A 2000 study from the University of Kinshasa found that Euphorbia hirta also significantly inhibited the growth of Entamoeba histolytica parasites.

Research from France’s University of Metz found in 1991 that Euphorbia herb reduced inflammation and pain.

The combination of these effects also support the ability of this powerful herb to reduce pain and inflammation.

Euphorbia contains a powerful flavanoid called quercitrin. This and other compounds give the herb a power antioxidant effect. Antioxidants reduce free radicals – which produce inflammation.

Ayurvedic texts have detailed that Euphorbia significantly relaxes the bronchial airways. This gives it the ability to aid asthma attacks and help curb inflammation in asthma. The effects found in the research above appear to support this use.

A 2016 study from Togo’s University of Lome studied 121 patients with asthma who were treated with Euphorbia along with 6 other herbs. The researchers found the herb to be effective in reducing symptoms.

Euphorbia contains many constituents, including at least a dozen of macrocyclic diterpenes and 17 different polyphenols.

This array of constituents – some of which have not been found elsewhere in nature – illustrates the complexity of this plant medicine.

Hopefully researchers will continue to explore this complex medicinal herb. We’ll keep you updated as they do.