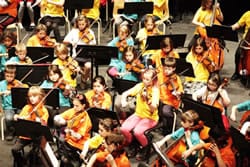 “I don’t even think about whether I love music or not because my connection to music is deeper than love.”
David France

At least once in our lives, most of us have been inspired through music to reach beyond what we thought was possible. For David France, music served as his bridge into a different kind of American dream. The son of immigrants from the West Indies, he was just a shy kid in school trying to find his way until one day he was introduced to the violin. Everything changed after that. David shares how his journey in life has blossomed in between the soulful notes of classical music.

He was named after his great-great grandfather, who had been born in France and through a series of unexpected events, ended up alone as a young boy in the West Indies. If not for the kindness of a man that took him in, the life of David’s great-great-grandfather might have turned out quite differently. Two generations later, David’s own parents were inspired by the American dream and moved to the United States from the West Indies.

In our conversation, David reflected on his relationship with music and this idea of the American dream. He expressed, “Immigrants have this American dream but we’re never really told how to find our way into that dream.” David’s way into the dream was music. At a time when he was expected to join track and his black and white peers told him that classical music was only for white people, David discovered the violin.

The manifestation of David’s dream is quite unique. His organization, Revolution of Hope, is largely focused on the transformation of others.

“Music was my way into that dream and once I was inside that dream I was really liberated to dream on behalf of others and it really transformed my life. Seeing the power that was in music for me really has propelled me to try and set something up for others in the inner city so that they can find their own dreams through a platform that we’ve created for them.”

What’s interesting is that David doesn’t believe that it’s the music that is creating the change, but rather, the music is the platform for change. Through Revolution of Hope students from Roxbury, a lower-income neighbourhood of Boston, are given a space to meet five days a week, three hours a day after school to learn how to create music.

“Every day we provide a space and instruments and instructions, all to offer a platform from which change can happen. For example, there is a new girl that has been in the program for about 3 weeks and she is famous in her school for being a problem child. It’s been amazing to see her grow and she’s been a wonderful addition to our program but she whines a lot! Yesterday I asked her, “Do you whine at your school all day like this?” and she answered, “No at my school I don’t have to work this hard.” A light bulb went off and I thought, “Wow, we’re holding her to this incredibly high standard of music making, and it’s pushing her.”

Because there are many competing needs in underserved communities, offering music as a pathway for inner and outer transformation can be a hard sell. In an age where we’re led to believe that testing and test results and academic success is the only kind of litmus test of knowing whether our school system is successful or if our students are learning anything, arts programs being cut because people do not see its benefits. But David believes that if he was able to find his way into the American dream through the arts, this means that this can also be their avenue into their own American story.

“Two days ago, one of the students showed me her report card. She started with us in September and since the first term, her grades have improved and she almost had all A’s this time. Even though she comes here five days a week and loses time to study, her grades have improved. It’s those kinds of stories multiplied year after year, kid after kid that really show that a different model is possible.”

The seeds for Revolution for Change were planted when David came across a YouTube video of “El Sistema”, an orchestral system in Venezuela that utilizes orchestras and choirs to transform communities in low-income barrios. What moved David even more was that about 40 years ago, the mutually accepted opinion was, “Of course Venezuelans can’t play in an orchestra! Classical music is only meant to be played by the western world.” In response, an inspired man gathered together 11 children in a parking space with the vision of utilizing music as a vehicle for social change. El Sistema now teaches music to more than 500,000 of Venezuela’s most vulnerable children.

When David finally had the opportunity to visit Venezuela and El Sistema, during his last week there he pulled up in this neighbourhood and was introduced to a mother of five. A year before she had moved out of her house with her five kids just so that the kids on her street could form an orchestra in her home! Every day, seven days a week, she has an orchestra playing out of her house, the classical notes dancing through the barrio and inviting community, transforming it along the way.

“This woman raises chickens and sells the eggs to buy the music for her orchestral program for children. I was really moved by that and thought, “When I go back to Boston when am I going to move out of my house and sell chicken eggs, and on behalf of what community will I do that for? The story of El Sistema in Venezuela really inspired me to see that music can not only transform my own life but also the lives of others and the communities that they live in.”

After he came back to Boston, David found a way to “sell eggs”. He sub-letted his apartment and started playing in the subway as a way to make a living. With his teachers, David started Revolution of Hope in Roxbury with literally no money but with a determined vision. They found a sympathetic principal that offered space at his school and in return for this gift, the school was being blessed with the magic of music. Next, a local college of music joyfully donated their instruments on behalf of inner city youth. And finally, they discovered a group of teenagers who had the desire to learn. All that remained was finding a way to pay theirown living expenses. Playing classical music in the Boston subway manifested as David’s personal chicken and egg story. He and his teachers continue to share music with those in transit, brightening their days while keeping Revolution of Hope alive.

Giving his life away, this is David’s motto. He is a world class musician that has had a sold out a YouTube symphony concert at Carnegie Hall and has played with the Boston Symphony Orchestra, the Minnesota Orchestra, and many others. He has collaborated with Kenny Rogers, John Legend, Smokey Robinson, and Quincy Jones. His work has brought him attention from CNN to Time magazine and Wall Street Journal and more. So what would drive him to give up a more comfortable life and the security of knowing where he will sleep and when he will eat next?

For David there were two key components. His parents took a leap of faith from this little tiny island and came into this country with literally no resources. By the time David came around, they had a small house that they shared with family after family, families that they knew and families that they didn’t know, families that just needed a place to stay as they transitioned from the Caribbean to the U.S.

“That was my upbringing, seeing my parents give their life away and give their house away. I saw that and that was normal, making risky moves on behalf of the joy of others was something normal. I think the foundation upon which we were raised turns into a part of who we are.”

Also, one of David’s mentors wrote a book called, “Don’t Waste Your Life”, which really shaped him. The book probed David to ask himself, “What are you going to give your life for and how are you going to make it meaningful?” David became committed to not wanting a life that wasn’t purposeful and for him there was no other alternative.

“There was nothing that I wanted to do more than this and it’s still true to this day. If there was a competing life reality, than that would easily win because it’s been a hard journey. But right now, no other competing desire for a certain kind of a life is outweighing this present desire to do this project.”

Once David travelled to Chicago to study with his teachers and arrived with just enough money for a single train ride. He needed to play in the subway in order to fund the rest of his trip. After finding the perfect spot, he started playing.

“As I’m playing “Somewhere Over the Rainbow,” I hear this murmur from somewhere in the crowd and soon realize that it was someone that was singing “Somewhere Over the Rainbow” with me. Then I realize that it was a blind man with a cane. He stops in front of me and he was singing the most soulful rendition while I was playing. An African American gentleman is so moved that his jaw dropped open and he opened up his wallet and threw all the money into David’s case. The blind man said, “I’m sorry, I don’t have anything to give.” But he had given me everything. He opened up my life again to what it looks like when you give your life away.”

David explained that playing in the subway is not an experiment to see how much a world famous violinist can make incognito. People who are in the subway are commuters so they’re usually in a rush with lots going on in their heads.

“Playing in the subway means connecting emotionally with commuters and becoming the musical soundtrack to their inner world. Whenever I’m headed to the subway to play, I’m always thinking and praying that I can be a blessing to the people because in a sense I’m forcing my music on them. I think that if I can be a blessing to them then it’s a completely different interaction then having this expectation, “Ok, I’m going to see how much money I can make in one hour.” That’s really different than, “I want to see if I could bless people.” Most people riding the subway will never go to Carnegie Hall or see the Boston Symphony and so I get to be that for them. This has become my my main motivation. I’m not trying to sell the eggs. I’m trying to bless people.”

If you can see your story in David’s journey to give his life away, or in the journeys of others to give their lives away, then David encourages you to take a leap of faith, to reach out, to become a part of it. Whatever “it” is for you, ask yourself if the alternative makes you come alive in the same way.