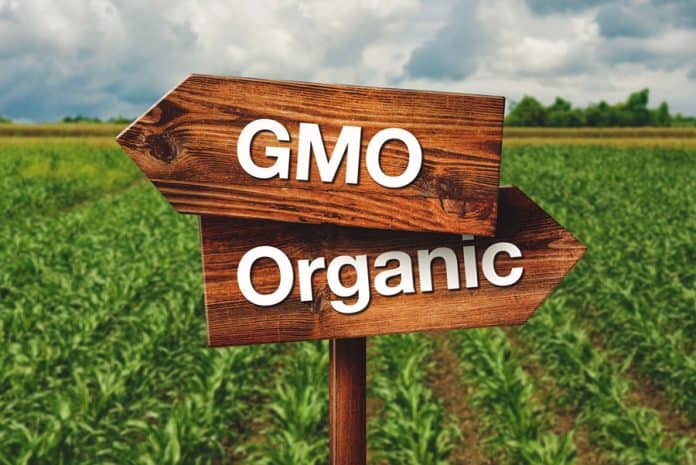 The Biotech industry assures the public that GMOs are substantially equivalent to their non-GMO or near-isogenic counterparts. In fact, the whole idea of substantial equivalence has been spun into existence by Big Biotech as a clever way to peddle their wares – but they like to have it both ways…

You see, when it comes to health, nutrient composition and regulation, Big Biotech insists that GMOs are substantially equivalent to non-GMO foods, so as to ensure they get full market access with minimal or no regulation – not even labelling. Yet, when it comes to intellectual property and patents, Big Biotech insists they “own” the molecules and combinations that make up GMOs, and that it is their property. (Biotech giant Monsanto has even sued small farmers for stealing their intellectual property, after GMO seeds have inadvertently cross-pollinated with non-GMO crops. ~ Editor.)

Many astute people have long spotted the deception and inherent contradiction in the substantial equivalence argument. Now, a recent peer-reviewed scientific study has taken the analysis to a whole new level, showing that GMOs are not so substantially equivalent to non-GMO crops at all…

The recent study is entitled: An integrated multi-omics analysis of the NK603 Roundup-tolerant GM maize reveals metabolism disturbances caused by the transformation process. To reach its conclusion, it used deep and complex analysis over various fields (proteomics, metabolomics and transcriptomics), which is why the title contains the word multi-omics. These are state-of-the-art molecular profiling ‘omics’ methods:

• Proteomics is the large-scale study of proteins

• Metabolomics is the study of small biochemical molecules

• Transcriptomics is the study of transcriptomes (the set of all messenger RNA molecules in one cell) and their functions.

Since this peer-reviewed study quickly jumps into technical language, I am summarising its results here in plain English to make it more digestible for the average person (and hopefully more digestible than GMO corn).

The study mentions in its abstract that there were various ways in which the GMO corn tested (variety NK603) differed from the non-GMO or isogenic version used as a control:

“Proteome profiles of the maize kernels revealed alterations in the levels of enzymes of glycolysis and TCA cycle pathways, which were reflective of an imbalance in energy metabolism. Changes in proteins and metabolites of glutathione metabolism were indicative of increased oxidative stress. The most pronounced metabolome differences between NK603 and its isogenic counterpart consisted of an increase in polyamines including N-acetyl-cadaverine (2.9-fold), N-acetylputrescine (1.8-fold), putrescine (2.7-fold) and cadaverine (28-fold), which depending on context can be either protective or a cause of toxicity.”

To break all this down, what it means is this: the GMO corn had markedly different effects compared to the control non-GM corn. These changes included the plant producing different levels of enzymes, undergoing an imbalance in energy metabolism, having indications of oxidative stress and producing 4 different polyamines (a type of protein). Almost all of these changes are not healthy.

It’s important to remember that genetic modification involves the random splicing of genes whose consequences cannot possibly all be measured, taken into account or even known. By studying the results closely on a proteomic, metabolomic and transcriptomic level, the study found that the GM plant was subjected to extra stress.

This meant the GM plant had to alter its usual way of growing in order to adapt to the stress by producing more antioxidant enzymes, more hydrogen peroxide and more glutathione (to try to rid itself of the toxic herbicides being sprayed on it).

In short, the entire metabolism of the plant was upset:

“The transformation process and the resulting expression of a transgenic protein cause a general disturbance in the GM plant and it is clear that NK603 maize is markedly different from its non-GM isogenic line at the proteome and metabolome levels. In addition, our data correlates with previous studies, which observed higher amounts of ROS (reactive oxygen species) that act as free-radicals promoting oxidative stress in those transgenic plant materials. We also confirm a metabolic imbalance in energy and carbohydrate metabolism.”

The presence of increased levels of polyamines mentioned above (N-acetyl-cadaverine, N-acetylputrescine, putrescine and cadaverine) is a sign that GMOs may be health-destroying rather than health-promoting or substantially equivalent to non-GMO foods. The lead scientist of the study Dr. Michael Antonio acknowledges that these polyamines can sometimes have beneficial effects; however he also writes:

“The marked increase in putrescine and especially cadaverine is a concern since these substances are potentially toxic, being reported as enhancers of the effects of histamine, thus heightening allergic reactions, and both have been implicated in the formation of carcinogenic nitrosamines with nitrite in meat products … Additionally, it is known that polyamines are typically elevated in plants under abiotic stress conditions.”

Doctrine of Substantial Equivalence Based on Deception

The doctrine of substantial equivalence is based on a shallow and crude analysis that the nutrient composition profile between GMO and non-GMO foods is roughly comparable or within a similar range. Yet is it fair to conclude the 2 are “close enough” or substantially equivalent just by comparing their nutrient profile? For starters, there are numerous studies that have found that non-GMO or organic produce is far higher in nutrients that its GMO counterpart.

However, even if the nutrient profile is similar, any fair comparison must take into account that GMOs are specifically engineered to be heavily sprayed with toxins, such as glyphosate, and to hold this glyphosate in their cells. How can the 2 possibly be substantially equivalent when the GMO variety is chock full of toxins? Additionally, the devil in is the details. The compositional analysis includes measurements of total protein content but not a profile of the different types of proteins which is more important information.

Conclusion: It’s Time to Seriously Question the Notion that GMOs are ‘Substantially Equivalent’

This study is further evidence that we need to quickly re-evaulate the faulty notion that GMOs are somehow different enough to be awarded patents and monopolies based on intellectual property (in essence owning Nature), while substantially equivalent enough that they don’t need labelling, packaging warnings, regulating or outright banning.

A government genuinely committed to the health of its citizens would ban GMOs outright pending further investigation, putting the burden of proof upon Big Biotech to demonstrate its modified food does not adversely affect human health.

Some nations such as Russia have taken the bold step of outlawing GMOS and refusing any GM food to be allowed in their country. Of course, proving that GMOs do no harm would be most difficult for the Big Biotech corporatocracy, given the existing evidence which implicates GMOs with organ failure, autism, infertility and cancer.