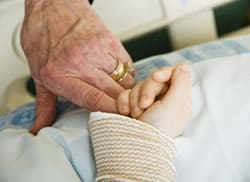 Compassionate care is the focus of a local program that is designed to improve the patient-caregiver relationship. Seventeen years ago today, in the Boston Globe Magazine, a dying man issued a plea for greater compassion in medicine. He worried that medical professionals faced increasing work demands that prioritised efficiency over empathy. Kenneth Schwartz died of lung cancer two months later, but not before founding an organization that would bring increased attention to the importance of human interactions in medicine.

The Schwartz Center for Compassionate Healthcare’s flagship program, which started at Massachusetts General Hospital in 1997, encourages doctors, nurses, and other health professionals to share the complex and often distressing feelings that arise from patient care. In recent years, the Schwartz Center Rounds have expanded rapidly, spreading to more than 260 institutions in the country and 14 hospitals in the United Kingdom.

The program’s growth reflects an increasing recognition that traditional ideals of the stoic, superhuman medical professional may not be healthy — for either the patient or the caregiver.

“The thought is that if caregivers can feel better and get in touch with their emotions, they’re going to be able to provide better care,” said Marjorie Stanzler, senior director of programs at the Mass. General-based Schwartz Center.

‘The thought is that if caregivers can feel better and get in touch with their emotions, they’re going to be able to provide better care.’

The Schwartz Center Rounds are one of several approaches that have emerged in recent years to help health care workers unload the stresses of their jobs, both to help them avoid burnout and to regain the empathy that is central to patient care. The rounds operate independently at different sites, but most meetings centre on a single case or incident, such as the death of a longtime patient, an outburst by a combative patient, or a medical error ending in a lawsuit. Hospitals have traditionally held clinical rounds at which physicians discuss the medical care of a difficult or interesting patient. In contrast, Schwartz Center Rounds highlight feelings — guilt, fear, anger, or sadness — that might lead caregivers to withdraw emotionally from their work.

Research suggests that without intervention, physicians may risk becoming less empathetic over time. A recent survey of 18 studies found that medical students and residents tended to report declining feelings of empathy over the course of their training. Another study found that self-perceived empathy dropped sharply after the third year of medical school, when students start working with patients in the hospital.

If work-related stress threatens empathy, then Schwartz Center Rounds present a possible solution, said Dr. Beth Lown, an internist and medical director for the Schwartz Center. “Everyone’s running around like cuckoo-heads with their pagers going off. To be able to take a moment to talk about what’s going on, to share that — it’s a gift,” she said.

Lown, who also teaches at Harvard Medical School, said that experienced rounds participants can help exemplify empathetic care to medical trainees who attend. “It’s incredible for them to see their superiors say, ‘This is how I’m feeling,’ and to cry in public,” she said. The rounds challenge the traditional medical culture that discouraged emotional attachment between physicians and their patients.

Some young physicians may also benefit from formal empathy education, according to Mass. General researchers. Dr. Helen Riess, a psychiatrist and director of the Empathy and Relational Science Program, has studied techniques for teaching medical residents and fellows to demonstrate greater compassion toward patients.
In a recent report, Riess found that medical trainees benefited from three 60-minute sessions that taught participants how to interpret subtle facial expressions and how to convey empathy through words and body language. The training also included videos that illustrated the physiological responses, as measured by skin conductance, associated with positive and negative clinical interactions.

Patients who visited physicians trained by the program tended to report receiving more compassionate treatment, according to Riess’s survey. The physicians themselves did not rate their own empathy as having changed.
“Some of it is training people to act that way, but at some level, acting that way leads you to feel that way,” she said. Most of the participating physicians reported finding the program interesting and helpful, and Riess hopes that empathy training can help physicians rediscover their love for treating patients.

At least some physicians are likely to avoid the rounds because of their public nature, said Dr. Jo Shapiro, who directs the Center for Professionalism and Peer Support at Brigham and Women’s Hospital. The centre arranges for physicians and nurses to provide one-on-one support for peers who have experienced a negative, unexpected patient outcome.

Shapiro developed her model in 2008 after finding that physicians often shied away from her centre’s mixed support groups, which included nurses and other staff involved in the case. “Either they didn’t show up or if they did, they’d show up in this leadership role,” she said of doctors. “They didn’t say I’m feeling terrible or I’m losing sleep. They’d come in and say, ‘You all did such a great job.’ ”

About once every two weeks, Shapiro’s team is notified when a doctor or nurse calls the hospital’s risk management office following a bad outcome. “We’re just going to assume as a human being you might be impacted and reach out to you. We’re not going to force it on you, but we’re here if you need it,” said Shapiro.
The Brigham also hosts Schwartz Center Rounds, but the individual peer support serves a different purpose.
“The focus is often on compassionate care toward the patient,” Shapiro said, “but what about compassion toward each other as health care professionals?” Shapiro believes that improving conditions for clinicians can ultimately help patients, but that patient well-being should not overshadow the unmet needs of caregivers themselves.
“Physicians get blamed for not doing a good enough job, for not being empathic enough, and that’s not the way to go at all,” said Leeat Granek, a health psychologist and postdoctoral fellow at the Hospital for Sick Children in Toronto. Granek, who has studied how oncologists grieve over patient loss, agreed with Shapiro that quality of life for physicians deserved more attention from physicians and their institutions.

Data from the Schwartz Center suggest there is much room for improvement. In a 2010 national telephone survey, 78 percent of recently hospitalised patients placed great importance on being treated as a person, “not just a disease.” In contrast, only 58 percent of respondents felt their recent care exemplified such treatment.
The Schwartz Center aims to institute its rounds in 450 health care organizations by the end of 2015. Hospitals comprise a majority of the sites now, but rounds are also spreading to agencies that provide home health services.
At the same time, the organisation is developing a national policy agenda to promote compassionate care, according to Schwartz Center executive director Julie Rosen. In November, the group will organize a conference of government officials, researchers, hospital administrators, and consumers to discuss plans for supporting greater compassion in the health care system.

“Starting with one patient’s story,” said Rosen, “it’s been a real evolution.”