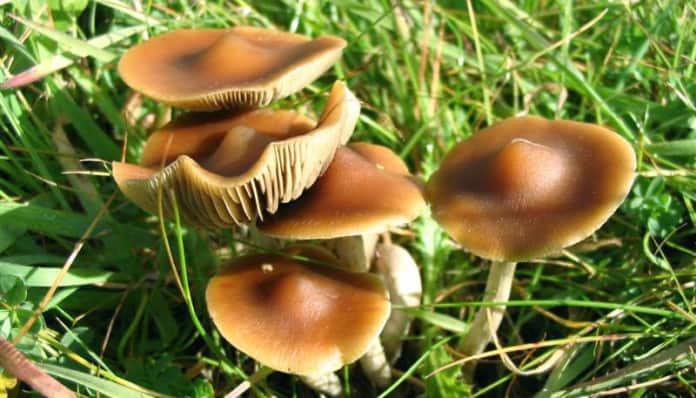 University of Queensland mycologist and evolutionary biologist Dr Alistair McTaggart has been given approval to collect and catalogue psilocybin mushrooms found growing in cow manure and leaf litter on damp forest floors after rain.

The federal government is investing a total of $15 million in grants to support Australian-led research into the use of mushrooms, ecstasy and ketamine to combat illnesses such as PTSD, major depressive disorders, addiction and eating disorders.

“Psychedelic mushrooms are taking off, everyone’s talking about them,” Dr McTaggart said.

“With COVID-19 right now, I think there’s never been a better time to start looking for therapies for mental health.”

Trip Into The Unknown

Globally, 200 species of mushroom produce psilocybin — a natural psychoactive compound with hallucinogenic effects similar to LSD.But little is known about the 20-30 species of psychedelic mushrooms in Australia, with Dr McTaggart’s research to investigate whether they are native, edible, poisonous or adaptable for medicinal use.

Some, like the golden top mushroom, or Psilocybecubensis — that is commonly found growing in cow pats — may originate from overseas.

At The University of Queensland, the Queensland Alliance for Agriculture and Food Innovation project will investigate the DNA of the mushrooms and their psychoactive properties.

Dr McTaggart is keen to tap into the knowledge of citizen scientists who photograph fungi and collaborate with researchers interested in cultivating promising genetic strains to tailor-make specific medical treatments.

In Australia, it is illegal to cultivate, possess, use or supply psychedelic mushrooms.But, like medicinal marijuana, Dr McTaggart said that would change, in line with other countries.

“The research that we’re talking about here — in terms of understanding the native psilocybin species — could contribute to the international psychedelic science renaissance,” Dr Bright said.

In 1970, disgraced US president Richard Nixon’s “war” on psychedelic drugs froze research into the therapeutic benefits of mushrooms. However recent international trials at Johns Hopkins Centre for Psychedelic and Consciousness Research have revealed psilocybin’s potential.
One treatment session with psychedelics is said to have achieved what years of psychotropic drugs and counselling had not been able to accomplish.
However, scientists also stress the risk of mistaking “magic” mushrooms for “deadly” mushrooms and warn that self-medicating hallucinogens for depression or anxiety could actually do people harm.

“It needs to occur in a clinical environment, where there are trained facilitators, psychologists, social workers [and] psychiatrists who are able to set up the right conditions because it can be challenging at times,” Dr Bright said.

“With depression, it allows people to consider their core beliefs of who they are as a person, how they relate to other people and where they fit in the world and those core beliefs are what’s driving the depression.”

Dr Bright described psilocybin as a non-addictive drug that could help treat addictions, explaining that people who use mushrooms on a frequent basis become tolerant quickly and do not get any effects from it any more.

“Psilocybin has almost a fail-safe built into it, to make it relatively safe as a drug — provided it’s used within the right setting, given the extreme state of consciousness that it produces.”

Doctor Tom May is the principal research scientist in mycology at the Royal Botanic Gardens Victoria and has compiled a catalogue of Australian fungi. He says Dr McTaggart’s genomic sequencing work will be important to be able to tell species apart.

“There has been a lot of interest in hallucinogens for many decades, but moving into a laboratory setting means that things can be tested and refined to really work out specific kinds of therapy using specific versions of the different compounds,” he said.

Dr McTaggart will also test the hypotheses that the Australian native mushroom Psilocybesubaeruginosa has spread globally to become the most commonly used psilocybin in the medical world.

“This species, or a close relative, is now the foundation of patents and research in Europe and the United States,” he said.
www.abc.net.au