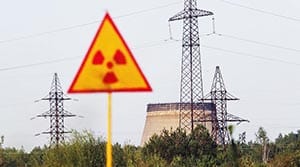 A Swiss-based company has reported spectacular results after one year of decontamination on a 2.5 acre plot of land (1 hectare) at Chernobyl, located in the radioactive exclusion zone around the plant in Ukraine.

The company, Exlterra announced in November 2021 that radioactive pollution in the soil decreased by 47%, and in the air above the ground by an average of 37%, one year after the installation of its NSPS technology (Nucleus Separation Passive System).

The company believes total remediation of the area is “seriously conceivable within four years” – without moving any earth or using any chemicals.

Sustainability is what it’s all about at Exlterra (pronounced excel–terra), which was co-founded in 2013 by Polish-American Andrew Niemczyk. So far, its novel technologies are not only able to safely clean radiation-scarred landscapes (with promising prospects for the treatment of radioactive waste), but also transform hydraulic power and boost the nutritional levels of trees.

The NSPS underground technology was installed at Chernobyl between November 2019 and September 2020, and it significantly accelerated the decay of radioactive elements by harnessing existing energy in the ground in a sustainable process.

It uses a series of tubes that are a specific shape, with a designated length and distance between each other, which enables the radionuclides to naturally decontaminate at a much faster pace than the 24,000 years, it would take on its own.

Twelve months after its deployment, the radioactive substances Cs137, Sr90, and Am241, were reduced by 47%, on average.

The methodology and rigorous measurement process was carried out by Ukrainian experts, who have been in charge of caring for the plant since it was capped for safety decades ago.

“These results are remarkable,” says Sergiy Kireiev, General Director of SSE Ecocentre in Chernobyl. “It is the first time in 35 years that any such technology has succeeded in reducing the level of radioactivity in the soil and air so significantly. There is now real hope for the whole area.”

“This 12-month reduction in radioactivity will allow us to bring this parcel of land back to its original radioactivity level over a 5-year period,” explains Frank Muller, co-founder and CEO of Exlterra. “We also want to quickly offer our solution at other problematic sites around the world, including Fukushima in Japan.”

The NSPS technology uses scientific concepts of particle physics and nuclear energy to solve the problem of severe contamination. It leverages in particular high velocity particles also known as positrons, to direct this naturally occurring force towards radioactive isotopes in the soil and breaks the bonds holding them together.

This is done safely under the surface of the soil and no radioactivity is released further into the ground or above the ground in the air, according to Exlterra. Once the positron comes into contact with the radioactive isotope, it rejoins an electron and annihilates back to its original matter.

“What seemed impossible is now a reality,” said Exlterra President and CTO Niemczyk in the company announcement. “NSPS is an innovation that allows positrons to naturally accelerate in a passive system to remove contaminated areas. It harnesses renewable energy sources present in nature to considerably accelerate the natural decomposition process of contaminants in the soil.”

“That’s what makes this invention unique – it uses natural energies to solve an industrial pollution without resorting to chemical substitutes or soil manipulation.”

A Scientific Revolution With Multiple Applications

In addition to treating radioactivity, NSPS technology can also be used to treat other types of soil contamination, including heavy metals and perfluoroalkyl substances, which are highly problematic for the environment.

“We are only at the beginning of the virtuous application of such a technology,” says inventor Niemczyk. “As with our other successfully commercialised technologies, we have demonstrated that we can use nature’s resources to heal the wounds we inflict on it. The common denominator of our technologies, installed underground, is the use of natural and renewable forces to achieve tangible results.”

Other positive aspects to this technology include being energy-passive and maintenance-free.

Niemczyk’s breakthrough NSPS technology is featured in a new book, Grounds for Freedom: Saving Chernobyl, by journalist R.J. King, who also set up a website SavingChernobyl.com.