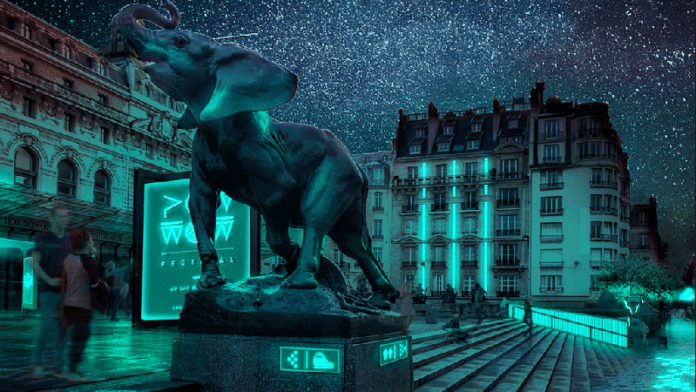 One of the most fascinating phenomena in nature; all kinds of animals, plants, and fungi utilize enzymes to glow in the dark, whether in an enchanting woodland, the bottom of the sea, or even in the town of Rambouillet, 35 miles outside of Paris.

“Our goal is to change the way in which cities use light,” Sandra Rey, founder of the French start-up Glowee, which is behind a public project in Rambouillet. “We want to create an ambiEnce that better respects citizens, the environment and biodiversity, and to introduce this new philosophy of light as a real alternative.”

Critics say that bacterial bioluminescence produces less than a quarter of the light from the lowest acceptable public lighting LED bulbs. But Rey says they’re missing the point;

… that glowing green fungi in public flower boxes, or tubes of saltwater filled with the blue glow of billions of tiny organisms offers the chance to reimagine what public lighting could be.

The Future Of Public Lighting?

Small tubes contain billions of individuals from a marine bacterium collected off the coast of France called aliivibrio fischeri, which glow a gentle blue. A small mix of basic nutrients is added to the football-sized tubes, which give off around 15 lumens of light, and a small mechanism pulls oxygen into the tank which the enzyme in the bacteria’s cells called “luciferase” needs to create light. To turn off the light, one simply stops circulating the oxygen.

The EU has laws for the minimum allowable street light illumination, for which Glowee remains 75% off mark. However sustainability opens all doors on the continent, and Glowee has received €1.7 million from the EU to develop its technology, because it’s carbon-neutral.

The company has a long way to go. As of now they provide the light for Rambouillet, and event lighting, but nothing else, although a spokesperson said they have 40 city-lighting projects in the works in countries across Europe.

Other firms and scientists are investigating fungi and plants, which also contain versions of luciferase, to see if flower boxes of glowing mushrooms or twinkling tabacum plants are brighter and more effective than bacteria.

*For more information and references, please visit the below website.
www.goodnewsnetwork.com