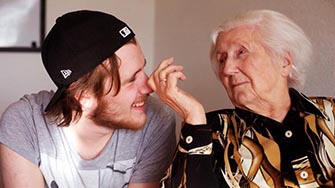 Baby Boomers and Gen X refuse to be defined by age and socially segregated by it, so a wave of communities that intentionally mix up age groups are rising globally – whether new co-housing, university-based, pocket neighbourhoods, or urban wellness models.

For years, it’s been said that 60 was the new 40. But now, according to ageing experts, 90 will soon be the new 40. The exponential jump in longevity means that people are retiring later and focusing on being active and engaged with personal growth into old age. Healthier and more youthful than their cohorts in previous generations, this incoming senior class doesn’t “feel old” and refuses to be defined by age or socially segregated by it.

That’s why today’s age-segregated models of senior living are simply no longer cutting it with a new generation that doesn’t believe in the concept of being put out to pasture upon retirement … with a bunch of other old people. When a market causes such fear and loathing, there is an incredible opportunity for reinvention, and the future demand for more creative and healthier senior living options will be intense. The 60+ global population is expected to double by 2050. In the United States, where age-segregated senior communities are most entrenched, all Boomers will be at least age 65 by 2030.

This 2022 trend, reported by the Global Wellness Summit and called “Senior Living Disrupted”, argues that senior living will rapidly give way to communities focused on intentional inter-generationality. Multigenerational living was how people always lived until recently and such old-school intersectionality still exists in the world’s Blue Zones – places like Okinawa, Japan and Sardinia, Italy – which also happen to be among the places where people live the longest and age the healthiest. Multi-generational living equals wellness.

In Singapore, where the number of seniors is expected to double (to 1 in 4 Singaporeans) by the year 2030, the government has been spending $2.4 billion to build three-generation housing developments and flats that have space and resources for both eldercare and childcare. Big developers such as Sun Hung Kai Properties (SHKP) are creating Hong Kong’s first multi-generational housing projects, with facilities mixing – and catering equally to – young and old.

One design scheme capturing the attention of senior living and wellness developers is the pocket neighbourhood: intentionally-designed homes/apartments centred around a shared natural space, such as a farm or village green, that encourages spontaneous, healthy interaction.

One example is Kallimos Communities, the latest brainchild of Dr. Bill Thomas, a geriatrician who has long worked on reinventing senior housing. In 2021, he introduced his latest concept – multi-ability, multi-generational communities (more below) where residents young and old live in smaller dwellings built in pocket neighbourhoods. The first is being built about 45 minutes from Denver, Colorado, with plans to roll out the communities nationwide. Agrihood, under construction in Silicon Valley, mixes seniors and lower-income people and vets in a multi-gen community that revolves around an amazing 4,200-acre farm.

Intergenerational communities and living offer one solution to today’s caregiving supply and demand challenge. Urban planner, Noelle Marcus, recently argued in the Stanford Social Innovation Review that we have two growing problems: (1) a large number of renters including many young, low-wage workers and students who are having a hard time finding affordable places to live, and (2) growing numbers of older adults with space in their homes who need extra income, companionship and a way to age in place. One solution neatly tackles both: intergenerational home-sharing.

Humanitas in the Netherlands is a clever spin on this solution: It’s a residential senior care centre that lets college students live there for free in exchange for 30 hours a week of volunteer time with the older residents.

But the young people report they receive as much as they give: the college students gain new perspectives and otherwise benefit from the wisdom of their elders.

In the Village to Village Network in the U.S., Gen X volunteers are now assisting older people with the services they need to stay in their homes, paying it forward on their needing help someday.

Back To School
There is a groundswell in building senior living models focused on lifelong learning. One popular concept emerging within the last decade is the university-based retirement community (UBRC). Located on or near college campuses, UBRC residents can take classes, volunteer and use the university’s fitness, wellness and recreational facilities, and often, in cases like Vi at Palo Alto, Stanford University, have access to excellent teaching hospitals. Lasell Village at Lasell University in Massachusetts is the first senior living community that requires residents to commit to the 450 hours of education annually, believing that learning simply needs to be a part of life. There are nearly 100 UBRCs today.

SAGE, an organisation for the LGBTQ community, recently partnered with two affordable apartment buildings in New York City to create the 17-story Stonewall House, with community spaces such as a roof deck, lounge and terrace, to create a unique “LGBTQ + Age-Friendly Elder Housing” residence.

As Steve Nygren, founder of the celebrated, multi-generational Serenbe wellness community outside Atlanta, Georgia, put it: “For years, we have been putting children and seniors in gated compounds that feel more like prisons. We think we have to lose the silos. Our idea is free-range kids and free-range seniors.”

Chip Conley, whose Modern Elder Academies (in Baja, Mexico and coming to New Mexico) are communities all about reimagining ageing, explained his vision:

“A regenerative community will be to the 21st century what a retirement community was to the 20th. We are shifting the primary aspiration in ageing from leisure, to cultivating purpose and connection. Instead of a golf course, we have a regenerative farm. Instead of a closed community, inter-generational engagement is a core value, with opportunities to learn, grow, serve and work together in an interconnected community.”

Kindred Uncommon is a multi-generational community concept “for modern adults of all ages who have never cruise-shipped through life, ” that revolves around green space, modern design built for connection, and creating community culture together. The first development is coming to a small town outside Austin, Texas in 2023 and there’s already a waiting list.

Their co-founder, AJ Viola, summed up the momentum for the new multi-generational “senior living” experiments so well: “We did dozens and dozens of interviews with people 60 and over, and everybody was approaching this next life stage with such excitement and optimism. And it felt like, why isn’t someone trying to bottle that energy and create something that celebrates this part of life?”