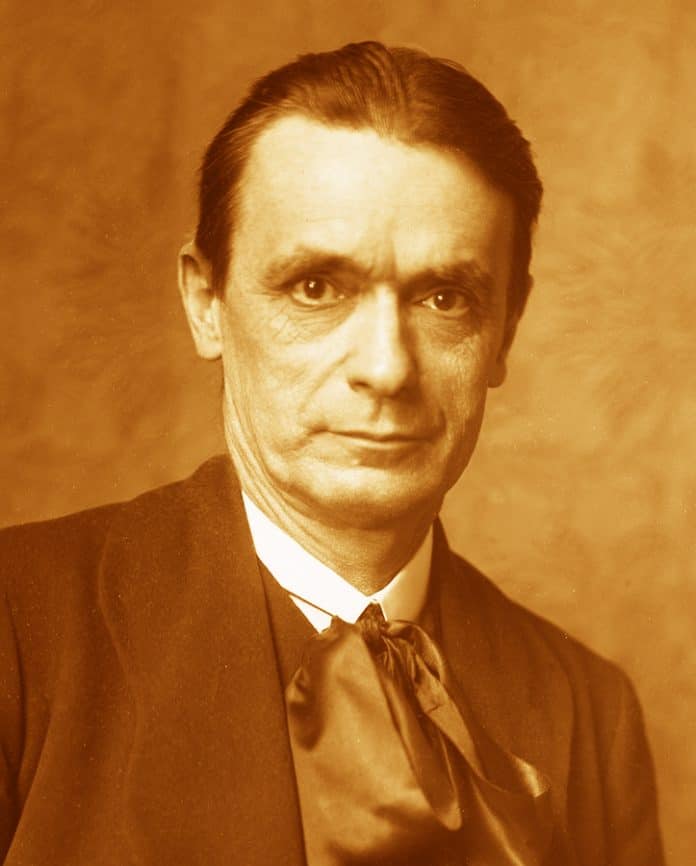 Almost a hundred years ago, as if peering into a crystal ball and predicting the future, spiritual teacher and clairvoyant Rudolf Steiner prophesied that the most momentous event of modern times was what he referred to as the incarnation of the etheric Christ. By the ‘etheric Christ,’ Steiner is referring to a modern-day version of Christ’s resurrection body, which can be conceived of as being a creative, holy and whole-making spirit that is inspiring human evolution as it operates upon the body of humanity through the collective unconscious of our species.

Involving a radically new understanding of a timeless spiritual event, the etheric Christ, instead of incarnating in full-bodied physical form, is approaching via the realm of spirit—as close as this immaterial spirit can get to the threshold of the third-dimensional physical world without incarnating in materialised form. To quote Steiner, “Christ’s life will be felt in the souls of men more and more as a direct personal experience from the twentieth century onwards.”

A spiritual event of the highest order, Steiner felt that the incarnation of the etheric Christ is “the most sublime human experience possible” and “the greatest turning point in human evolution.” The etheric Christ is a non-local, atemporal spirit, existing outside of space and time, that is simultaneously immersed in, infused with—and expressing itself through—events in our world. The etheric Christ reveals itself—for those who have eyes to see and ears to hear—as it weaves itself, not only through the warp and woof of the flow of events comprising history, but through our souls as well.

To quote Steiner, “in the future we are not to look on the physical plane for the most important events, but outside it, just as we shall have to look for Christ on His return as etheric form in the spiritual world.”

The most important spiritual events of any age often remain hidden from the eyes of those who are entranced in a materialistic conception of the world. It greatly behooves us to not sleep through, but rather, to consciously bear witness to what has been up until now taking place mostly unconsciously, subtly hidden beneath the mundane consciousness of our species. If this epochal spiritual event, to quote Steiner, “were to pass unnoticed, humanity would forfeit its most important possibility for evolution, thus sinking into darkness and eventual death.” If the deeper spiritual process of the incarnation of the etheric Christ is not understood, this potentially liberating process transforms into its opposite (into the demonic).

Steiner felt that the advent of the etheric Christ—the Parousia (the Second Coming)—was the greatest mystery of our time.

He was of the opinion that the incarnation of the etheric Christ was the deeper spiritual process that is in-forming and giving shape to the current multi-faceted crises (and opportunities) that humanity presently faces. .

This is to say that the seemingly never-ending wars and conflicts that are taking place all over the globe are the shadows cast by spiritual events from a higher-dimension that are animating earthly happenings. One of the main reasons that these multiple crises are so dangerous is because their deeper spiritual source remains unrecognised.

The higher order of light encoded within the etheric Christ is bringing to light the darkness which is seemingly opposed to it, which further helps its light nature to be seen. The true radiance of the light can only be seen and appreciated in contrast to the depth of darkness it illumines.

A fundamental spiritual principle of creation itself appears to be that when one force—e.g., light—begins to emerge in the universe, a counterforce opposed to the first, arises at that same moment. Just as shadows belong to light, these light and dark powers are interrelated, reciprocally co-arising, inseparably contained within and expressions of a single deeper unifying process. In essence, spirit is incarnating, and it is revealing itself through the very darkness that it is making visible.

Commenting on the other—and less recognised—half of the Second Coming, Steiner chillingly said, “before the Etheric Christ can be properly understood by people, humanity must have passed through the encounter with the Beast.” By “the Beast” he means the apocalyptic beast, the radically evil.

The Beast is the guardian of the threshold through which we must pass in order to meet the lighter, celestial and heavenly part of our nature.

As soon as I read Steiner’s prophecy I felt the truth of his words. I recognised how what Steiner was saying mapped onto—and created context for—what is happening in our current world-gone-crazy. I also recognised the truth of what Steiner was saying based on my own inner experience. I have noticed that as I get closer to connecting with the light within myself, the forces of darkness seem to become more active and threatening. It is as if there is something in me—and in everyone, which is to say this situation isn’t personal—that desperately doesn’t want us to recognise and step into our light.

This internal process is taking place within the subjectivity of countless individual human psyches, which is then reflexively being collectively acted out—in my language, “dreamed up”—en-masse in, as and through the outside world.

In his prophecy, Steiner is pointing out that our encounter with the Beast is initiatory, a portal that—potentially—introduces us to the Christ figure. To quote Steiner, “Through the experience of evil it will be possible for the Christ to appear again.”

It is noteworthy that the opposites are appearing together: coinciding with the peak of evil is an inner development which makes it possible for the etheric Christ—who is always present and available—to be seen and felt as a guiding presence that can thereby become progressively more embodied in humans, both individually and collectively as a whole species. In the extreme of one of the opposites is the seed for the birth of the other. Speaking of the power of the etheric Christ, Steiner said, “When this power has permeated the soul, it drives away the soul’s darkness.”

The brightest, most radiant and luminous light simultaneously casts and calls forth the darkest shadows. Through this process of Christ manifesting in the etheric realm, humanity is exposed to evil in a way never before experienced, such that—in potential—we may be able to find the good and the holy in a more real and tangible way than was previously possible.

Humanity’s highest virtues and potentialities are activated and called forth when confronted by evil. Evil, according to Steiner, though by definition diametrically opposed to the good, is—paradoxically—a catalyst for bringing the power of goodness to the fore.

It is an archetypal idea that ascending towards the light always necessitates a confrontation with and descent into the darkness. Evil, according to Steiner, co-emerges with the possibility of humanity’s freedom, as if God could not create true freedom for humanity without providing a choice for evil. To quote Steiner, “In order for human beings to attain to full use of their powers of freedom, it is absolutely necessary that they descend to the low levels in their world conception as well as in their life.”

From Steiner’s point-of-view, evil is created by and for freedom, and it is only through the conscious exercise of freedom of choice—which evil itself challenges us to develop—by which it can be overcome.

The mystery of humanity’s higher nature is inseparable from the mystery of evil. It is beyond debate that in our current age we are called to deal with evil—only those who choose to stay asleep, or are overly identified with the light (and hence, project out and dissociate from their own darkness) are blind to this.

No realisation of the light would ever occur without first getting to know its opposite. Whoever wants to support the sacred must be able to protect it and we can only do so when we know the forces that oppose it.

Evil, however, has an intense desire to remain incognito, below the radar, as its power to wreak havoc is dependent on not being recognised. Paradoxically, it is only by knowing the Beast in ourselves that we become truly human. Recognising the depth of evil within ourselves helps us to develop the inner capacity to stand free of it, and in so doing, become acquainted with the part of ourselves that is beyond evil’s reach, thus enabling us to establish ourselves as free, sovereign and independent beings.

It is to our advantage to know that our worst adversary resides in our own heart, rather than falling for the all-to-common delusion of thinking that our enemy is outside of ourselves.

If we become conscious of the evil within us, in our expansion of consciousness, that evil is promoting our spiritual development. We have then, through our realisation, alchemically transmuted evil into a catalyst for our evolution. To quote Steiner, “The task of evil is to promote the ascent of the human being.” The question naturally arises: if, as Steiner professes, freedom is actualised only through the existence of evil, is evil an expression of a higher intelligence, an aspect of the divine plan designed to bring about a higher form of good that couldn’t be actualised without its existence?

The sponsor of humanity’s evolution, the etheric Christ doesn’t give the answer, but inspires the question. Sometimes it’s more important to ask the right question than to find the right answer.