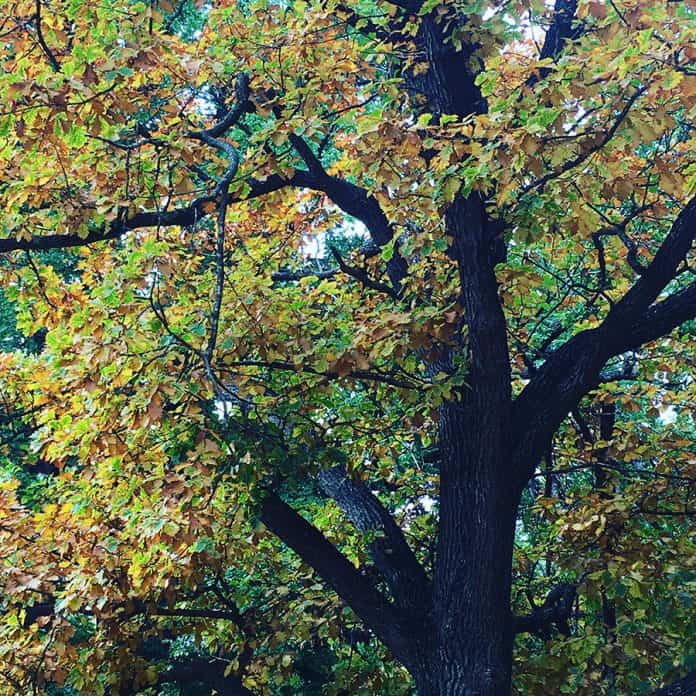 When I was a kid, I would name the trees in my backyard. They all had distinct personalities and dynamic qualities, including the ability to talk. I would spend inordinate amounts of time collecting their branches and sticks, talking with them about my life and theirs. My imagination was fascinated with their solid presence coupled with a mysterious aliveness that defied their seemingly fixed nature. They knew something and I wanted to know what that was.

Over two decades later, I find myself in the Amazon jungle and I’m still talking to trees. And they still have personalities and qualities and they do indeed talk back. Some are funny, some more reserved and laid back, others more serious, and they are all loving and willing teachers.

I now walk into the forest and feel enmeshed in this visible and invisible web of plant-ness, part of an ongoing conversation that never once left any of us out. Perhaps we still know how to speak this language, the knowledge of its universality rooted somewhere in the backyards of overstimulated city-minds.

In a quiet moment, surely most of us can recall an occasion from our youth where something memorable and magical happened with a tree (or a plant or a rock) – a special climbing spot, a cozy place to read, a secret hideout, or a passageway into an imaginary world we ventured to with friends.

As children, we loved them. Our ancestors did, too. In a number of pre-modern cultures around the world, trees were and remain to be sacred. For instance, the World Tree motif is strikingly common. It depicts the universe as made up of sky, earth and under-earth, all upheld and connected via a grand cosmic tree. Sometimes referred to as a Tree of Life, this theme can be found in mythological, religious, shamanic and folkloric references in cultures as widespread and diverse as ancient Turkic, Germanic, Siberian, Persian, Chinese, Hindu, and Mesoamerican. Often the mythological symbol was born from a local species of significance, like the Ceiba for Mayan peoples or the Oak for pre-Christian inhabitants of northern Europe. In other parts of the world, certain species are praised, protected and regarded as sacred by those who live amongst them, including the Cedar in Lebanon and the Redwoods found on the northwest coast of the United States.

Several years ago, on my first quest to the Amazon jungle, I set out to participate in a traditional healing practice known as a dieta. Local jungle cultures have been practising this form of healing, learning, and connecting with the forest for at least several hundred years, and likely longer. The experience is tree-centered and primarily conducted in solitude while following specific dietary and behavioural restrictions. The specific restrictions can vary by tradition but typically include a dauntingly bland food fare that is free of salt, sugar, oils, and spices; sexual abstinence; no human touch or contact; no strenuous physical activity; refraining from drugs or alcohol; and no use of hygiene products. Once a day for three or four days the dieter consumes a mild tea made from the raw bark of medicinal trees. The length of the diet and the restrictions are followed for an agreed upon period of time, lasting anywhere from 5 to 30 days, and sometimes longer.

The purpose is to make contact with the spirit of the tree so that it will teach you its wisdom and healing properties. The limitations on behaviour and consumption help you enter a state of receptivity that is conducive to spirit communication. Entire shamanic traditions and mythologies are built on this single principle: plants can teach and talk to us.

The traditional lore maintains that once a plant has been dieted, its spirit remains within the body and is always available to offer its assistance and guidance. We bond with them and they become an inseparable part of us.

It’s quite humbling to spend time with plants in this way, regarding them as teachers and asking for their help. I was certainly not wired this way going in, as much as I wanted to believe in the mythos around it all. I was quite attuned as a child but somewhere along the way, like most of us, I gave in, at least partially, to the cultural undertow of modern life.

Now here in the jungle I was able to grasp intellectually what the tradition was telling me: the forest and its inhabitants are intelligent and we are all part of the same interconnected web of nature, and we can tap into these interconnections and learn from them.

Still, the dieta passed without fireworks. I spent a lot of time wondering what was happening, sinking in and out of a wakeful dreaminess that didn’t seem to produce much activity, let alone lively discussion with plant spirits. Despite the seeming but not disappointing dullness, I went home with a tiny but growing sense of knowing that in some remote part of my consciousness, at a primal, animal level, an interaction of some sort had occurred and a subtle shift was underway. It took months to begin unravelling what that shift was, and many more months to start discerning what the trees were talking about.

Months became years, and one shamanic diet became several more. Gradually, I became increasingly aware that the trees were treating my inner world as an environment. They would scan my mind and body and feelings for things that were out of balance, threats to the equilibrium and safety of the organism, or elements in the ecosystem that were causing harm or damage. This new ecosystem was made up of me and my life and my consciousness; and I was now the source of nutrients and food that perpetuated and maintained their growth as well as my own. Thoughts, emotional residue that didn’t support positive change, unhealthy patterns of behaviour that led to disharmony – all were treated like soil to be cleansed or water to be purified.

The trees wanted to grow, strong and healthy, and they wanted the same thing for me. They patiently but persistently sought to align my environment in symbiosis, with a new home established. This process ensures the successful fruiting of the dieta, represented as lessons made clear, realisations brought to awareness, or healing taking affect. For me, the fruit of change was apparent in two main areas: communication and relationships. I learned how to speak with more presence, focus and meaning. I began to feel the true meaning of meaning, and how impactful words are. I learned the importance and unmatched value in positive and supportive human relationships. I now know what it means to be there for someone else, and how to listen from the heart. I strive to embody these lessons in my life.

Is this all the result of tree spirits taking up residence in my body? I can’t say for sure. But I can say that since I began this part of my journey, my life has changed course significantly. And the plants seem to have played a central role in initiating that shift. They knew something and were showing me what that was.

And I also knew there was more to the story. During this time I started investigating the biology of plant life. I discovered some marvellous aspects of plant behaviour that science was itself recently unearthing that paralleled my inner experience of the dietas. It turns out that plants are hyper-aware of and interactive with their surroundings. They engage with their environments through an elegant system of communication that affects not only them but nearby flora and the biosphere around them. Through “nature’s internet” plants are able to scan their surroundings, signal other plants, cooperate and share resources with their neighbours, and implement not only strategies of survival but those that lend to flourishing – for themselves and the ecosystem as a whole.

The foundation of their common tongue is a mutually beneficial relationship with mycelium, a network of interconnected fungi that bond to roots to create a forest-wide web. This allows plants to send and receive messages to one another. The messages are biochemical and practical, leading to change.

Trees will pass between them things like carbon, phosphorous, and nitrogen. This isn’t sporadic, either. Evidence shows that they can sense imbalances in the environment – a lack of phosphorous or carbon for example – and neighbouring trees will share their abundance with those who are lacking. An interesting find shows that this sharing of resources favours not only interspecies members but also the spawn of mother trees. Communicative sharing also occurs across the species boundary in a kind of communal cooperation that often takes place in times of greater need and in response to seasonal resource demands.

One of the more interesting displays of plant talk is their ability to warn others of danger. Let’s say a plant is threatened by a pest or malignant fungus. Neighbouring plants will take measures to protect themselves by releasing defensive chemicals even if they aren’t the ones being attacked. That’s right: A plant that becomes aware of such a threat will send messages to neighbours, warning them, so the affected trees are able to take measures to defend themselves. A similar mechanism has been observed with plants that are being eaten by a pest. They will alter their biochemistry to release a toxin that is uniquely poisonous to the intruder.

Remarkable and thought provoking as this may be, it is somehow equally not surprising. Of course our earth-bound kin are aware and intelligent to this degree! Of course they are self-regulating, with the bounty and harmony of the entire ecosphere in mind. And we are learning that they wield a linguistic sophistication that helps them shape and guide the evolution of all their kin, the forest and the earth itself.

We have heard the familiar clichés – we are all one, we are all connected. I certainly don’t discount or disparage the implied wisdom in the trope. But these words can easily become wind, symbolic placeholders. Plants can show us how this wisdom is embodied in details, in the small acts of sharing and caring and looking out for others. This gives the universality of the wisdom its nutritional value. In this way it is made relevant to daily existence and what it means to share the earth as a human cohabitant.

Perhaps we are not so different than our light-transforming counterparts. Being themselves, plants exude a practicality that is grounded and rooted in a kind of self-awareness that promotes the balance and harmony of all. Perhaps we are all talking the same language, all looking for answers to the same questions, as we seek new ways to live more harmonious, balanced and self-aware lives.