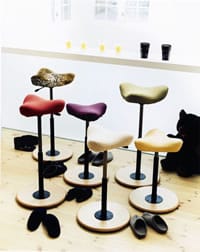 Active sitting may sound like an oxymoron, but it’s a health trend that’s fast sweeping through many workplaces in the U.S. in an effort to bolster interest in fitness and increase activity in settings that typically involve high levels of sitting and little physical movement.

The concept involves exercising while working, but without the yoga pants, excessive sweat and disruption to the work environment. In other words, whistle while you work, but also whittle your waist and improve health at the same time.

New York office worker Alanna Astion is a very good example of someone who embraced the concept of active sitting. “I couldn’t deal with sitting down for so long. I started to get cramps in my legs,” she said.

Her solution? She purchased an exercise bike which fit under her desk and used it daily for about 20 minutes. Not only have her leg cramps gone by the wayside, but she says that she’s lost five pounds since she began using the bike.(1)

Other fitness-minded in-office devices include sleek wellness balls with high-tech covers, which are weighted to prevent rolling away. In other instances, under-desk elliptical machines are popular. Backless and slightly buoyant chairs may also be a common sight.

One company that sells such chairs, which they call “Swoppers,” maintains that the controlled movement of the chairs is designed to improve posture, strengthen abs and boost circulation. It’s even great at getting ride of calories. In fact, Chas Hepler, CEO and President of Via Seating, the maker of Swopper chairs, states that use of the chairs can burn upwards of 500 calories daily.

Another common way of staying active while at the office is by using a desk treadmill. Designed to hold a laptop so that an employee can walk while using the computer, it too, is growing in popularity. So intrigued by the concept were the folks at the University of Minnesota that they decided to test its effectiveness among staff at a financial company in the state.

At the end of the year-long study, it was found that supervisors and those who worked for them demonstrated increased levels of productivity and creativity, something which researchers involved with the study say is likely linked to increased blood flow to the brain during times of exercise.)

The surge in such devices has grown in popularity as recent headlines have equated long periods of sitting with serious health consequences.

“If you’re getting your 30 minutes of exercise in a day,” said Dr. Jacquelyn Kulinski, associate professor for cardiovascular medicine at the Medical College of Wisconsin, “but you’re sitting at your desk 10 hours a day, you’re still getting detrimental effects to your cardiovascular health.” She notes that heart attack, stroke and increased cholesterol and blood pressure levels are all risks for someone who sits for long periods of time.

Other experts, such as Charles E. Matthews, who has authored many studies on sedentary behaviour, and Tal Amasay, a biomechanist at Barry University’s Department of Sport and Exercise Sciences, stress the importance of physical activity over sitting. They point to studies that have linked long periods of sitting with an increase in certain cancers, honing in on the likelihood that physical activity encourages increased antioxidant activity that can help kill off cancerous cells.

These experts also explain that sitting on something wobbly can engage ab muscles and lead to an improvement in overall muscle function, while walking, even slowly, can burn calories. Everything from back problems and circulatory issues to organ damage and slowed brain function can be prevented with the increased use of active sitting and other in-office activity devices.