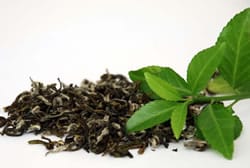 Tea is one of the oldest drinks (used for almost 50 centuries in Asia) and – after water – the most common beverage people enjoy the world over (Mandel et al. 2008). Native to China, it comes from the evergreen plant Camellia sinensis. A cup of tea contains numerous compounds in varying quantities: vitamins, polyphenols, caffeine, fluoride, sugars, amino acids, proteins, minerals, chlorophyll and others (Zhao et al. 2013). Which tea is produced (white, green, oolong or black) depends on the subsequent processing of harvested Camellia leaves. Teas can be classified as non-fermented (green and white teas), semi-fermented (oolong tea), and fermented (black tea).

The health promoting effects of green tea are attributed to the rich antioxidant polyphenol content of its leaves (flavonols and catechins), making up c. 30% dry weight of a tea leaf, and exhibiting biochemical and pharmacological activities (Siddiqui et al. 2006). Recently, many of these beneficial effects were traced back to the most abundant catechin, EGCG (Wolfram 2007).

And just like a good wine, geographic location, soil and growing conditions play a role in tea quality, too. Tea leaves are heated and dried to inactivate enzymes, thus preserving constituents until we come along to make a brew by simply adding hot water.

As a rule of thumb, the bigger the leaf, the better and more tasty the tea.

Tea bags either contain chemicals (epichlorohydrin) to prevent the paper from disintegrating in water, or are made from plastic including potentially harmful substances. Both are not the best choice. No need to ingest anything that doesn’t naturally belong in the body. Exercising control whenever you have it makes not only sense, it is also for a much healthier body.

So why go green?

Green tea is traditionally associated with various health benefits, and science, mostly since 1995, has been beginning to confirm its beneficial effects on inflammation, arthritis, bacterial and viral growth inhibition, various cancers, eliminating toxins, the cardiovascular system, gums and teeth, the nervous system, and others.

There are over 12.000 published (peer reviewed) articles on green tea.

The search ‘green tea benefits’ on Web of Science returned 711 papers, a few of which form the basis of this article.

Tea variety and preparation method (at the growers and at home) also matter in bringing out the beneficial influence green tea bestows on our body (Shishikura & Khokhar 2005), as does bioavailability: we can ingest something, yet is it readily available to our cells in that form? If yes, it’s bioavailable, i.e. the body can use it straight away. If not, it may go right through without affecting anything. This is the reason why some supplements do not work – they are not presented in the right (bioavailable) form to the body. In green tea, bioavailability of catechins is directly proportional to the amount consumed (Reygaert 2014).

The following lists some of the benefits you may gain when regularly drinking green tea (multiple cups a day).

Evidence from epidemiological studies suggests that the habitual consumption of green tea inversely relates to cardiovascular mortality, mortality from stroke, the risk of developing diabetes and hypertension, and also to the percentage of body fat and its distribution (long-term tea drinkers are less obese) (Wolfram 2007).

A cohort study in over 40.000 Japanese adults found a reduced mortality rate from cardiovascular disease by 26% in green tea drinkers consuming 5 or more cups per day compared to those drinking 1 cup or less a day.

Mortality from stroke was reduced by 37%. This study also found a positive dose/ response relationship: the more green tea people drank, the less likely they were to die from cardiovascular causes (Ohsaki Study 2006).

Epidemiological and intervention studies indicate that consumption of 5–6 or more cups of green tea, containing 200–300 mg EGCG, per day may be beneficial for maintaining cardiovascular and metabolic health (Wolfram 2007). EGCG in form of a supplement acutely improved endothelial function in people with coronary artery disease, and may account for a portion of the beneficial effects of flavonoid-rich foods on endothelial function (Widlansky 2007). Five cups of tea consumed at 2h intervals elevated catechin plasma levels up to 12-fold (Sharma et al. 2007).

A preliminary study into the benefit of habitual tea consumption with respect to markers of chronic inflammation concluded positively, even though the authors call for more long-term trials and research to back up their findings (De Bacquer et al. 2006).
Among other conditions, inflammation occurs with arthritis, cardiovascular disease, aging, and cancer. One possible mode of action of green tea ingredients is the increased production of an anti-inflammatory molecule (cytokine IL-10) that helps heal inflammation (Reygaert 2014). Using green tea extract, another study showed decreased inflammation and LDL levels in participants (Cooper 2012).

In similar fashion, green tea also acts on Streptococcus mutans, a caries bacterium, by inhibiting its growth and adhesion to oral surfaces (Reygeart 2014).

While apparently no cancer preventive effects were found for oesophagus lesions and stomach cancer (Del Rio et al. 2014, but see Cooper 2012 and Sharma et al. 2007), data from men with a precursor of prostate cancer looked promising: daily consumption of tea extract (200 mg flavan-3-ols) for one year resulted in 8x less tumour diagnoses in the tea drinking group vs the control group (even though the test group was rather small).

Other good evidence for beneficial effects of green tea on prostate cancer comes from a case control study of 130 Chinese men with histologically confirmed adenocarcinoma. Jian et al. (2004) reported a significant dose-response relationship, where the frequency, duration and quantity of green tea consumption had a positive effect on patients.

While this is not yet a study of human subjects, these results are encouraging and also in line with above Chinese study.

Green tea seems also beneficial in the context of skin UV radiation damage and cancer. Based on the information obtained in animal models, studies suggest that the regular consumption of 5–6 cups of green tea (1 g green tea leaves/150 ml water = 1 cup) per day may provide a similar photo-protective effect in humans. Therefore, regular consumption of green tea or green tea polyphenols may be considered an effective strategy for the prevention of inflammation-associated skin diseases, including UV irradiation-caused skin tumour development (Katiyar 2011). The same author recommends further investigating drinking green tea as a chemo-preventive method of skin cancer in humans, and its possible use in the future practice of medicine.

Considering that Asian countries, home to most habitual green tea drinkers in the world, exhibit the lowest cancer incidences worldwide, it could well be that green tea forms part of the underlying cause for this observation (Siddiqui et al. 2006). Another intriguing discovery was that apparently the regular combination of green tea and chilli peppers during meals results in a lower incidence of all cancers when compared to a population drinking green tea only (Cooper 2012).

The inhibitory effect of active ingredients such as tea catechins is based on four possible modes of action in bacteria: breaking the cell wall or membranes, disrupting DNA synthesis, or interfering with protein synthesis. The antibacterial effect of green and black tea extracts were comparable to the effects of the antibiotics amoxicillin and cephadrine (Cooper 2012). Green tea and its extracts also exert synergistic effects in combination with antibiotics. They have been successfully used to inhibit otherwise resistant bacteria such as MRSA (Methicillin-resistant Staphylococcus aureus) (Reygaert 2014).

Overall, results indicate a great potential of green tea as an antimicrobial agent. The polyphenol content (particularly EGC) in one cup of Japanese green tea should impair bacterial growth for up to 6h or longer, according to calculations that each cup of such tea contains c. 3.5 mg active ingredient (ECG), and that most bacterial strains tested responded to a lower concentration of ≤0.72 mg ECG (Reygaert 2014).

Interestingly, polyphenols may also act as promoting factors of growth, proliferation, or survival for beneficial gut bacteria (Chen & Sang 2014), as most tea components (including polyphenols) reach the colon, rather than remaining in the small intestine (Del Rio et al. 2014).

7) Elevating mood and level of attention

Both green and black tea may also positively influence our attention and mood (Einoether & Martens 2013). A cup of tea is often associated with relaxation and feelings of refreshment and satisfaction, which can reflect in physiological responses such as heart rate. The tea catechin EGCG evoked a calming response where people felt less stressed after a dose of 300mg (Einoether & Martens 2013). Another study found a decrease in stress and improved task performance after drinking green and shaded white tea. It also mentioned increased human brain alpha activity after consumption of 50 mg theanine (see below), indicating improved performance under stress (Yoko et al. 2014).

There is also evidence for increased alertness and concentration after tea consumption, attributed to caffeine and theanine. Tea leaf caffeine content is 3-6% (Sharma et al. 2007).

Tea helps recover from stress, and a study of Japanese adults showed that a high level of green tea consumption (5+ cups) was related to lower psychological distress (Einoether & Martens 2013). A cohort study in Japanese elderly found a decreased prevalence of depressive symptoms in people who drank green tea more frequently (da Silva Pinto 2013). Contrary to longitudinal studies which look at long term benefits of tea drinking (e.g. weight control or neuroprotective benefits), effects on mood and attention are acute and occur within a few minutes or hours after tea consumption (Einoether & Martens 2013).

While most studies focus on catechins as active ingredients and effectors of physiological changes, green tea also contains the amino acid L-theanine, which is able to cross the blood-brain barrier. It has been shown to directly influence the brain by evoking an alpha state of relaxed alertness. L-theanine possesses neuroprotective, mood enhancing and relaxation properties and may cause anti-stress effects by inhibiting cortical neuron excitation. One paper concluded that L-theanine augmentation of antipsychotic therapy can ameliorate anxiety symptoms in schizophrenia and schizoaffective disorder patients and calls for long-term studies of L-theanine to substantiate the clinically significant benefits of L-theanine (Ritsner et al. 2011, Cooper 2012).

The chelation properties of tea may protect the body against toxicity from heavy metals (Siddiqui et al. 2006), easing their excretion.

Other authors observed a decrease in the incidence of cold and flu in people taking tea extracts containing L-theanine and catechins (da Silva Pinto 2013).

While authors largely report beneficial effects, some also found no effects. Discrepancies in research questions, results, and interpretation exist, making comparison of study results difficult. Scientists take care to err on the conservative side, rather than promising their audience too much. Hence, a lot of sound studies conclude carefully in the positive, calling for more research to confirm their findings – a standard approach in scientific discourse.

A major difficulty with any study looking into the benefits of a food or drink is to control for confounding factors, as people’s life styles vary considerably, within and between cultures. So to attribute any effects to tea consumption alone is rather tricky and challenging for study design and interpretation. Some of the studies cited here managed to consider these factors rather well (e.g. Ohsaki Study 2006), thus offering valuable information on green tea and its effects.

All up, positive evidence for the benefits of drinking green tea seems to far outweigh counter-indicative literature. Few studies report potentially negative effects (Jain et al. 2013). One parameter that belongs here is tea as a possible source of fluoride, pesticides and heavy metals (Sang et al. 2011, Clark & You 2006). Note that these aren’t necessarily intrinsic to the plant, but substances plants may take up from the environment they grow in. Hence, if you choose organic sources, the influence of these factors should automatically decrease. And a pristine growing environment least likely carries high levels of contaminants for tea plants to take up and accumulate. Shopping organic and reading labels definitely pays.