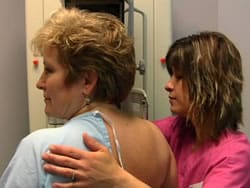 A disturbing new study published in the New England Journal of Medicine is bringing mainstream attention to the possibility that mammography has caused far more harm than good in the millions of women who have employed it over the past 30 years as their primary strategy in the fight against breast cancer.

Titled “Effect of Three Decades of Screening Mammography on Breast-Cancer Incidence,” researchers estimated that among women younger than 40 years of age, breast cancer was overdiagnosed, i.e. “tumours were detected on screening that would never have led to clinical symptoms,” in 1.3 million U.S. women over the past 30 years. In 2008, alone, “breast cancer was overdiagnosed in more than 70,000 women; this accounted for 31% of all breast cancers diagnosed.”

The primary form of mammography-detected breast cancer is ductal carcinoma in situ (DCIS), also known as ‘stage zero’ or ‘non-invasive breast cancer.’ Unlike truly invasive cancer, which expands outward like the crab after which it was named (Greek: Cancer = Crab), ductal carcinoma is in situ, i.e. situated, non-moving – an obvious contradiction in terms.

Also, DCIS presents without symptoms in the majority of women within which it is detected, and if left untreated will (usually) not progress to cause harm to women. Indeed, without x-ray diagnostic technologies, many if not most of the women diagnosed with it would never have known they had it in the first place. The journal Lancet Oncology, in fact, published a cohort study last year finding that even clinically verified “invasive” cancers appear to regress with time if left untreated:

The new study authors point out “The introduction of screening mammography in the United States has been associated with a doubling in the number of cases of early-stage breast cancer that are detected each year.” And yet, they noted, only 6.5% of these early-stage breast cancer cases were expected to progress to advanced disease. DCIS and related ‘abnormal breast findings,’ in other words, may represent natural, benign variations in breast morphology. Preemptive treatment strategies, however, are still employed today as the standard of care, with mastectomy rates actually increasing since 2004.

The adverse health effects associated with overdiagnosis and overtreatment with lumpectomy, radiation, chemotherapy and hormone-suppressive treatments cannot be underestimated, especially when one considers the profound psychological trauma that follows each stage of diagnosis and treatment, and the additional physiological burdens such psychic injuries lead to, including up-regulation of multidrug resistance genes within cancer as a result of the increased adrenalin associated with the ‘flight-or-fight’ stress response.

Also, it is now coming to light that chemotherapy and radiation actually increase the proportion of the highly malignant cancer stem cells to the relatively non-malignant daughter cells within the tumour colony, much in the same way that conventional antibiotic agents drives multidrug resistance within the subpopulation of surviving post-antibiotic bacteria, ensuring recurrence. Conventional treatments also drive the surviving stem-cell enriched tumour populations into greater resistance and metastatic potential when it does inevitably recur. Further, radiation therapy may actually increase the ‘stemness’ of breast cancer cells making them 30 times more malignant (capable of forming new tumours).

If it is indeed true that DCIS, other abnormal breast findings, as well as clinically confirmed invasive breast cancer, either remain benign or regress when left untreated. The entire breast cancer industry, which is already deeply mired in cause-marketing conflicts of interest, must radically reform itself, or face massive financial and ethical liabilities vis-à-vis outdated and no longer “evidence-based” practices.

Another serious problem with mammography (and there are dozens of them) not addressed in this latest research finding concerns the unique carcinogenicity of the x-rays the technology employs. We now know that the 30 kVp radiation, colloquially known as “low energy” x-rays, are between 300-400% more carcinogenic than the “higher energy” radiation given off by atomic bomb blasts (200 kVp or higher). Present day radiation risk models used to assess the known breast cancer risk associated with mammography against the purported benefits do not take into account this profound discrepancy. In fact, these models were developed before DNA was even discovered.

Also, considering that breast cancer susceptibility genes, BRCA1/BRCA2, interfere with the DNA self-repair mechanisms needed to reduce the carcinogenicity associated with radiation exposure within those who carry these genetic variations, the harms associated with mammography may be exponentially higher than the conventional medical community presently understands and communicates to their patients. Indeed, it is likely that x-ray based mammography screenings have been planting the seeds of future radiation-induced breast cancer within exposed populations.

With top-tier biomedical journals now publishing research diametrically opposed to the policies and recommendations of both governmental, non-governmental and industry-sponsored health organiSations, the time is ripe for us to critically evaluate conventional medicine’s standard of care and to educate ourselves further to the true causes of cancer.