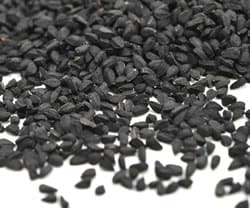 A range of chemotherapeutic options for treating cancer are available, however many of the treatments are themselves associated with significant morbidity and mortality. Today many cancer sufferers search for alternatives to conventional chemotherapy.

Increasingly, natural alternative options are becoming available, often with little or no side-effects and concrete science is proving the effects of many natural substances against cancer.

One substance which is increasingly making the headlines is thymoquinone, an active component of Nigella sativa or black seed oil. Scientists from the Institute of Biochemistry and Biotechnology, Taiwan, have found that this remarkable compound elicits cytotoxic effects on various squamous cancer cell lines through various mechanisms. The study examined a highly malignant strain of squamous cell carcinoma, which was taken from various patients with oral cancer; this particular cancer type also causes many other cancers of the head and neck.

The cell lines were grown in a lab and treated with different concentrations of thymoquinone. The results showed that after just 24 hours of treatment there was a significant concentration-dependent cytotoxic effect on these cells. The study further examined why this was happening. Their findings are quite remarkable as they were able to demonstrate that thymoquinone was a potent inhibitor of oral cancer cell viability via two distinct anti-neoplastic mechanisms.

Our cells have a safety mechanism of programmed death which kick in if they become disordered, as usually happens when they become malignant. Tumours grow from these disordered cells if the safety mechanisms fail. Thymoquinone was found to induce this mechanism of programmed death in the squamous cell carcinoma cells, effectively making them shut down and die.

Autophagy comes from the Greek auto-, “self” and phagein, “to eat”. It is the term given to a cellular mechanism in which intracellular components are isolated within the cell and then destroyed. Research suggests that this suppresses tumours by isolating damaged parts of a cell and even promoting cell death of cancerous cells. Further, thymoquinone induced significant amounts of autophagic activity in the squamous cell carcinoma cells examined in the study.

Interestingly, the group also examined the effect on normal oral mucosal cells and found no significant inhibitory effects from thymoquinone.

The scientists went on to test the effects of thymoquinone on xenografts (implanted tumours) in mice. They found that oral administrationof thymoquinone to the mice resulted in a profound reduction in size (volume and weight) of the tumours at 20 days.

The group concluded that thymoquinone is a promising candidate in phytochemical-based, mechanistic, and pathway-targeted cancer prevention strategies.