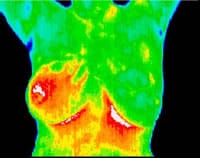 The breast cancer advocacy group, Susan G. Komen for the Cure — which famously introduced the world to the pink ribbon — used misleading statistics in an advertising campaign to overstate the benefits of mammography, while ignoring its risks, say researchers publishing in the BMJ.

Breast cancer screening has sparked ongoing debate over the last few years, particularly since 2009 when the U.S. Preventive Services Task Force (USPSTF) rolled back its breast-cancer screening guidelines, advising against routine mammography for women in their 40s, and instead recommending screening every other year for women starting at age 50. The guidelines were based on data showing that routine mammograms may cause more harm than good in younger women, leading to overdiagnosis, aggressive overtreatment, undue stress and complications.

Still, the American Cancer Society continues to recommend annual mammograms for women in their 40s, and many women choose to adhere to a similar screening schedule. But many have lingering questions about the risks and benefits of screening, and getting reliable data can be tricky. Many women look to their doctors, who aren’t always up on the most recent data, or to well-known breast cancer charities like Komen.

Last year, Komen ran an ad for mammograms urging women to “get screened now” because “early detection saves lives. The 5-year survival rate for breast cancer when caught early is 98%. When it’s not? 23%.”

The numbers suggest that women “would have to be crazy” not to get screened, say the authors of the editorial in the BMJ, Lisa Schwartz and Steven Woloshin of the Center for Medicine and the Media at The Dartmouth Institute for Health Policy and Clinical Practice. “But it’s the advertisement that’s crazy,” they say, because its presentation of data wildly misrepresents the true mortality benefits of screening and fails to address the potentially serious risks.

“Komen’s public advertising campaign gives women no sense that screening is a close call. Instead it simply tells women to be screened, overstates the benefit of mammography, and ignores harms altogether,” they write.

Say, for instance, 100 women receive diagnoses of breast cancer at age 67, not through screening but because they detect a breast lump. Assume they all die at age 70; five-year survival for this group would be 0%. Now, say the women were screened and given their cancer diagnosis three years earlier, at age 64, but they still die at age 70. Five-year survival is now 100%, even though no one in the screening group lived any longer.

“Five-year survival is all about what happens from the time of diagnosis: it is the proportion of women who are alive five years after diagnosis. Because screening finds cancers earlier, comparing survival between screened and unscreened women is hopelessly biased,” the authors write.

When you look at the actual life-saving benefits of screening — not by judging five-year survival rates, but by comparing overall death rates in women at various ages who get screened or don’t get screened — the numbers are a lot less compelling. For example, women in their 50s who get routine mammography will reduce their odds of death from breast cancer over the next 10 years from 0.53% to 0.46% — a difference of 0.07 percentage points.

But “mammography certainly sounds better when stated in terms of improving five-year survival — from 23% to 98%, a difference of 75 percentage points,” the authors note.

Early detection can also distort five-year survival rates, Schwartz and Woloshin argue, because it can catch small tumours that would never have caused symptoms or killed patients to begin with; some tumours grow extremely slowly or not at all. By diagnosing these women, you’re including patients who will by definition survive, thereby inflating five-year survival statistics even though the screening itself didn’t actually save lives.

“If there were an Oscar for misleading statistics, using survival statistics to judge the benefit of screening would win a lifetime achievement award hands down,” the authors write.

Further, the Komen ad fails to address the harms of screening, the authors note:
Between 20% and 50% of women screened annually for a decade experience at least one false alarm requiring a biopsy. Most importantly, screening results in overdiagnosis. For every life saved by mammography, around two to 10 women are overdiagnosed. Women who are overdiagnosed cannot benefit from unnecessary chemotherapy, radiation, or surgery. All they do experience is harm.

“Everyone agrees that mammography isn’t perfect, but it’s the best widely available detection tool that we have today,” said Chandini Portteus, vice president of research, evaluation and scientific programs at Susan G. Komen, in a statement [PDF]. She acknowledges that “science has to do better,” which is why the charity is putting millions of dollars toward early detection research and toward studies designed to help doctors identify which tumours will spread and which won’t. “While we invest in getting those answers, we think it’s simply irresponsible to effectively discourage women from taking steps to know what’s going on with their health.”

Indeed, few doctors would disagree that mammography has benefits. The problem is that those benefits are often overstated. “Women need much more than marketing slogans about screening: they need — and deserve — the facts,” the authors conclude. “The Komen advertisement campaign failed to provide the facts. Worse, it undermined decision making by misusing statistics to generate false hope about the benefit of mammography screening. That kind of behaviour is not very charitable.”