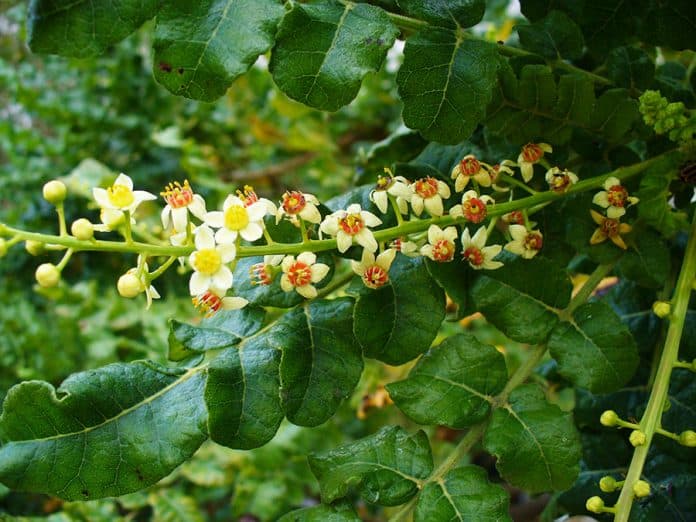 The same herb frequently eaten as salad in Asia has been shown to destroy cancer cells — without harming healthy tissue. Researchers at the University of Washington have created a compound based on traditional Chinese medicine that is 1,200 times more effective in killing malignant cells than chemotherapy drugs. Combined with iron, the herb selectively targets cancerous cells and has proven to be a powerful tool in combating the disease. Tomikazu Sasaki, senior author of the study and chemistry professor at the University of Washington, describes the compound as “… a special agent planting a bomb inside the [cancer] cell.”

Since traditional chemotherapy is rife with severe side-effects and kills healthy cells, researchers are encouraged by these findings. Standard chemotherapy destroys as many as 1 normal cell for every 5 cancer cells. The compound developed by Sasaki and his team is far more specific, killing 12,000 cancer cells for each healthy cell affected, which minimises adverse side-effects. Because of this, the effectiveness of the treatment is increased as higher doses can be tolerated.

Portrait of a 2,000-Year-Old Medicinal Treasure

Sweet wormwood (Artemisia annua L.) has been used for over two millennia in traditional Chinese medicine for a variety of complaints — from skin disorders to high blood pressure and malaria. Native to Asia, the plant is rich in the following beneficial compounds:

Artemisinin is the active component found in sweet wormwood, which has been used successfully to treat malaria and has saved millions of lives worldwide. Now researchers are turning their attention towards applying the herb to cancer.

Iron as a Trojan Horse

Artemisinin on its own will destroy 100 cancer cells for every normal cell. To improve the results, researchers added an iron chemical tag into the mix. Since cancer cells need large amounts of iron to maintain rapid tumour growth, they will readily engulf the artemisinin-iron tag compound. As explained by UW Today, “Once inside the cell, the iron reacts with artemisinin to release poisonous molecules called free radicals. When enough of these free radicals accumulate, the cell dies.”

Henry Lai, a University of Washington bioengineering professor and co-author of the study, said the compound is like a Trojan horse in gaining access to cancerous cells. Artemisinin is extremely toxic when combined with iron, but harmless otherwise.

Cancer cells are also not as efficient as healthy cells in cleaning-up free-floating iron, making the malignant cells more sensitive to the herb. Because cancer cells are already under stress from high iron levels, artemisinin pushes the cells over the edge. Due to this mechanism, researchers believe the compound can be used successfully for almost any type of cancer. Currently, the artemisinin-iron tag duo has been tested on human breast and prostate cancers in vitro, and has safely killed breast cancer in rats.

To establish artemisinin’s effectiveness, the team saturated normal breast cells and radiation-resistant cancerous tissue with holotransferrin — a compound found within the body that carries iron into the cells. Next, the cells were dosed with artemisinin. Within 16 hours, all the cancer cells exposed to holotransferrin died and only a few normal cells were affected. Lai notes that a breast cancer cell contains up to 15 times more iron receptors than other cells, therefore making it more susceptible to artemisinin’s assault.

“Most currently available drugs are targeted to specific cancers,” Lai said. “This compound works on a general property of cancer cells, their high iron content.”

The research team hopes that since artemisinin is already widely available, a compound to treat cancer can be manufactured inexpensively to help those who are ill in developing countries.

The Washington Technology Center and the Witmer Foundation provided funding for the study.