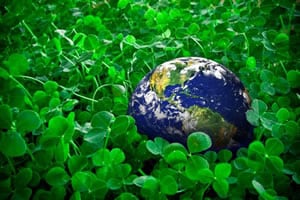 A couple of weeks back, Sam and I spoke at a local gathering in Oakland, U.S. In casual conversation, the convener of our circle, Syra tells us: “I love that so many people are talking about sharing. See, I’m always campaigning for it,” handing us a card for a local sharing event. “But you know, I tried to get into this sharing conference, and it was 500 bucks! Doesn’t that just feel wrong? Most of us can’t afford that kind of sharing.”

Like many, Syra consolidated two ideas into one: sharing and giving. Traditionally, sharing has much in common with giving, but in the booming phenomena of a ‘Sharing Economy’, they are significantly different.

Sharing has elements of inter-connectedness, of a village-like community, of a transformative altruism. But ‘economy’ puts us squarely in a transactional mindset and culture of convenience. Enthusiasts of the multi-billion dollar (and growing 25% annually) ‘sharing economy’ say that it is the best of both worlds, cite data on how sharing is the new buying, and get excited about ideas like ‘collaborative consumption’.

Yet, it’s easy to see how those phrases land more as oxymorons. Sharing and collaboration are typically we-oriented ideas, while buying and consumption are clearly me-oriented. Consumption subtly becomes stronger, and all of a sudden, ‘sharing economy’ feels a lot more like economy and a lot less like sharing.

It’s a pattern we’ve seen before. Sometime last year, I ran into a woman who had just quit her job, after ten years of leading a pioneering sustainability organization. Just plain burned out. When I probed further, she said: “I started with the hope that we could elevate economic forces to value nature. Instead, what we’ve done is commoditised and devalued nature.” Same thing happened with social entrepreneurship. Bill Drayton’s vision behind it was to leverage entrepreneurship to solve complex social problems; instead, all businesses called themselves social and diluted its essence. Similarly, Muhammad Yunus pioneered micro-finance with the idea of eradicating poverty, but now MFI institutions openly profit from poverty. We’ve even done this with friendship. Facebook and the world of social media forged trillions of new connections amongst us, but it has simply cheapened the idea of friendship.

Now, it seems like sharing is having its turn.

In ‘Case Against Sharing’, Susan Cagle writes: “For the past few years, the ‘sharing economy’ has characterised itself as a revolution: Renting a room on Airbnb or catching an Uber is an act of civil disobedience in the service of a righteous return to human society’s true nature of trust and village-building that will save the planet and our souls. A higher form of enlightened capitalism. [But] sharing economy’s success is inextricably tied to the economic recession, making new poverty palatable. It’s disaster capitalism. ‘Sharing’ companies are not embarrassed by this — it appears to be a point of pride.”

On paper, it seems like a good idea to build an app to share my lawn mower with everyone on my block. But it never stops there. Soon, everything that we used to share informally now tempts us with a price tag. I could share my room on CouchSurfing, or I could get a bit of cash through AirBnb. I could connect with my neighbours in my spare time, or give a ride on Uber and a bit of extra cash. I could spend a bit more time with my kids, or I can take a small job on Mechanical Turk and make a bit of extra cash. And the conspiracy of the price-tag is supported by an entire system ranging from education to economy to our technologies to the mindsets we culturally encourage. It is very difficult to not take the bait, whether as a designer or a consumer, and the rules of the game are making it harder and harder by the day.

Consider ride sharing services, that allow everyday people to turn their cars into cabs. For many, it delivers technology’s promise to connect strangers, rewire relationships and create community. Uber, a $10 billion startup, was the early one. But then Lyft came along, where its entire payment system was donation based. Lyft cofounder, John Zimmer, goes so far as to liken their intent to time he spent on the Oglala Sioux reservation in South Dakota. “Their sense of community, of connection to each other and to their land, made me feel more happy and alive than I’ve ever felt before,” he says. “I think people are craving real human interaction – it’s like an instinct. We now have the opportunity to use technology to help us get there.”

A donation-based service would indeed require two parties to be in a much more nuanced relationship (indeed, like a native pot-lach), so that felt exciting. Not for long, unfortunately. As they got $333 million in funding and built some legal muscles, Lyft now aims to “be a bit cheaper (and a whole lot more fun) than other transportation alternatives.” No serious disruption of values there.

When what used to be shared informally turns into a formal, commoditised transaction, we lose something. That something is subtle, so it’s easy to gloss over. But over time, it cheapens our human experience. We strip away our commons, and we forget how to value things without a price tag.

The highest potential of sharing is when it embeds the transformative spirit of generosity. When kids share their favourite toy, or when we share a seat on a crowded bus, or when we share our public parks, the quality of connections can go quite deep. It’s one thing to get into a car-turned-cab with someone smiling to keep their online ratings for future profit, and then say goodbye after making a mechanical payment through your iPhone.

It’s quite another to ride in a rickshaw where someone before you has paid for you and you are trusted to evoke your empathy muscles to pay forward for the person after you – to a rickshaw driver whose entire family depends on his earning, and who still humbly offers himself in the spirit of unconditional love. That is a VERY different kind of “peer to peer” economy, and a very different kind of sharing.

Looking at the trajectory, I now wonder about gift economy. Over the last 15 years, ServiceSpace has helped popularise the modern iteration of that idea. Smile Cards, Karma Kitchen, and more. The essence of gifting is to give with no strings attached. That kind of giving creates relationships that go deep enough to facilitate a circle of giving – A gives to B, B gives to C, and C gives to A. It’s not just enough that A, B, and C are connected. They have to be connected in a way that everyone trusts in a pay-forward interconnectivity.

Only generosity can create that kind of economy. So if this phrase goes the way of its predecessors, if the unchecked momentum of economy overrides the gift, we will have cheapened the idea of generosity.

As Viral recently pointed out, gift ecology is probably a more suitable word. Economy reduces value into a few focused dimensions, whereas ecology implies a more intricate interplay of relationships that generate diversified — sometimes immeasurable – value. When we give freely, we naturally build affinities with recipients and over time, create deep ties that form the basis of a gift ecology and a resilient society.

Of course, such an ecology is rooted in selfless action, which requires a significant inner transformation. In the deeper recesses of our mind, where the dominant pattern is to operate from a very narrow notion of self, we have to transition from me to we to us, with the understanding that the small self is best served when it can let go to the bigger ecology. A lot of research suggests that, for instance, we can’t teach compassion but we can create the conditions for it to arise naturally. In that sense, we can’t manufacture such a world or a culture. It has to emerge. We simply till the soil, sow the seeds, water the plants, and then trust the interconnections of the ecosystem to build its trees as the time ripens.

Then, instead of economy leading the sharing revolution, it might be led by generosity. Generous sharing, with that kind of momentum, as time ripens, naturally blooms into a gift ecology..