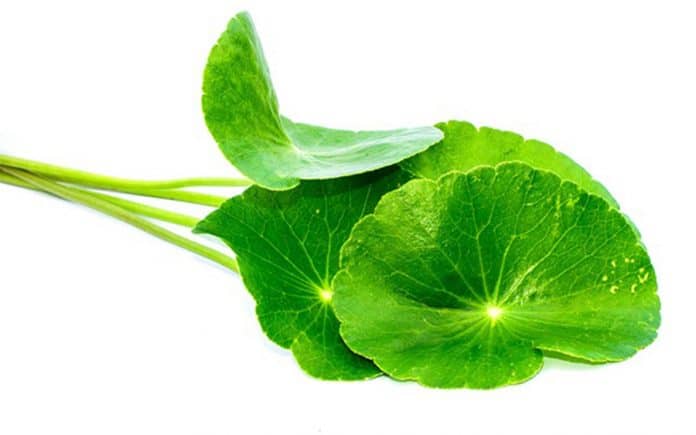 Other names for Gotu kola

About the Centella asiatica plant

This wonderful herb grows profusely throughout Asia, Africa, Indonesia, South Pacific Islands and in tropical regions of Australia and New Zealand. It is a small, ground-creeping vine that will also grow over stumps and up trees if it has enough moisture.

The leaves are mostly used as medicine. These small heart-shaped leaves can readily be eaten raw and have a crisp, tangy taste. For medicinal uses, Gotu kola is often concentrated and extracted and put into topical creams or oral herbal supplements.

In a 2017 study published in the journal Medicine, researchers tested a cream made from Centella asiatica on 75 skin burn patients. The doctors split the patients into two groups. One group was treated with sulfadiazine cream (conventional treatment) which was applied topically. The other group was treated with a topical cream made of C. asiatica.

The doctors found that healing was significantly faster among the Gotu kola group compared to the sulfadiazine group. This effect was seen within three days of the beginning of treatment. The researchers also found that pain levels (using the VAS scores) were significantly less among the C. asiatica group.

A number of studies have shown increased wound healing and skin health from the topical application of Gotu kola.

For example, a 2012 study from Korea found that C. asiatica helped protect the skin from damaging effects of too much UVB radiation from the sun.

Other studies have found that Gotu kola significantly increases wound healing in general.

Multiple studies have confirmed that C. asiatica can be used to treat eczema (atopic dermatitis). A 2015 study of 360 eczema patients were treated with either placebo or a C. asiatica cream. The cream included walnut and turmeric and the treatment period was over three months.

The treatments with the Gotu kola formula resulted in reduced itching, scaling, redness, pain, and other symptoms compared to the placebo group.

A number of studies have investigated C. asiatica’s ability to treat and reduce varicose veins, including a 1990 study from the University of Naples which treated varicose vein patients with a topical cream of Gotu kola extract. It was found that the treatment improved the metabolism of the blood vessel walls, and improved varicose vein symptoms.

A series of studies from Italy tested a number of patients with venous insufficiency and found that internal supplementation of a total triterpenic fraction of Gotu kola for 6 weeks to two months significantly improved their symptoms.

A 1987 study of 94 patients with venous insufficiency also tested Gotu kola extract against a placebo. Venous insufficiency significantly decreased among the C. asiatica treatment group, while the issue became worse for the placebo group.

Venous hypertension has also been reduced using Gotu kola. A 2001 study from the UK’s Imperial College in London tested 40 patients with this condition. Patients were given between 60 milligrams and 120 milligrams daily of a total triterpenic fraction of Gotu kola. Those given the Gotu kola resulted in significant improvements among their blood vessels. These included flowmetry and PO2-PCO2 measures.

Most of the above studies also found swelling or oedema levels were also significantly reduced.

Another 2001 study from the Imperial College tested 62 patients with oedema in the form of ankle swelling. After four weeks of treatment with either placebo or the Gotu kola, the researchers found the C. asiatica significantly reduced ankle oedema (using the AET – ankle edema tester). The researchers found that 180 milligrams a day of the extract was the most effective.

A 1990 study from Italy’s D’Annunzio University tested 50 patients with ankle oedema. They were given a C. asiatica extract or placebo. The researchers found the oedema significantly improved among the Gotu kola treatment group.

Another study tested ankle oedema resulting from diabetes. In this 12-month study, the researchers found the Gotu kola supplement decreased ankle swelling by an average of 28 percent among the patients.

Atherosclerosis is the build-up of plaque within the blood vessels which can lead to strokes and heart attacks, as bits of plaque are released into the bloodstream. Blockages caused by plaque within micro-capillaries is a common cause for stroke.

Researchers from the UK tested tested 50 patients who had a build-up of artery plaque. The doctors gave the patients either 180 milligrams of a total triterpenic extract of Centella asiatica or conventional treatment. After one year of treatment, the researchers found the C. asiatica treatment helped stabilie the plaques which became less likely to break off. The doctors concluded:

“These observations indicate a positive action of TTFCA [Gotu kola extract] on the stabilisation of hypoechoic, low-density femoral plaques.”

The same researchers also tested for carotid artery plaque among a group of patients. Again, they found the Gotu kola resulted in more stabilised plaques among the carotid arteries of the patients. This of course, reduced their risk of stroke.

A 2015 study from Italy’s G. D’Annunzio University tested 1,363 people, giving each person a combination treatment of Pycnogenol and C. asiatica extract or placebo over a 30 month period. The research found the combination reduced their development of atherosclerosis.

A 2003 study from Mahidol University in Thailand tested 20 patients with periodontal disease. After having their teeth cleaned, the patients were given treatments in the form of chips with Gotu kola and pomegranate (Punica granatum) extracts.

After three months and six months, the patients treated with the C. asiatica combination had significantly healthier gums and reduced periodontal disease.

Other research has found that applying topical patches containing Gotu kola to the gums can significantly decrease gingivitis symptoms.

Research has also found that Gotu kola increases cognition and betters moods. Researchers from Khon Kaen University in Thailand studied 28 healthy elderly people who were given either a placebo or Gotu kola extract ranging from 250 milligrams to 750 milligrams per day for two months.

The researchers found the C. asiatica group had significantly better memory and self-rated mood scores compared to the placebo group.

“Therefore, the present findings suggest the potential of Centella asiatica to attenuate the age-related decline in cognitive function and mood disorder in the healthy elderly.”

A 2015 laboratory study from the Oregon Health and Science University found that C. asiatica halted the process of amyloid beta development among brain cells. A 2014 study from the same researchers found it was Gotu kola’s caffeoylquinic acid content that seemed to ameliorate A-beta plaque.

C. asiatica has a reputation for being a purifying compound. This was proven in a 2009 study from Italy’s University of Rome. The researchers tested 80 patients at various medical centers that had phlebostatic sores – also referred to as phlebitis ulcers.

Half of the patients were treated with a cream that contained Gotu kola. The doctors found the cream sped up the healing times. It also increased the lymph drainage of the patients.

This of course brings up the notion of gastric ulcers. A number of laboratory studies have indicated that Gotu kola has a healing effect upon stomach ulcers. This, however, has not been confirmed in human studies.

Lymph draining also indicates that Gotu kola is blood purifying as well. This has also been discovered independently. A 1990 study tested the blood of healthy people before and after dosing with Gotu kola. They found that the Gotu kola significantly increased the blood’s pharmacokinetics – indicating increased delivery and clearance of drugs and nutrients.

Researchers from the University of Ottawa in Canada tested 40 healthy people with anxiety symptoms. Each person was given 12 grams of dried C. asiatica to eat or a placebo. The researchers then monitored their acoustic startle response rate (ASR) after 30 minutes and an hour.

The researchers found the Gotu kola significantly reduced the ASR. This indicated to the researchers the ability of C. asiatica’s anti-anxiety effect. Studies with rats have further concluded this effect.

Several studies have confirmed that C. asiatica can significantly improve liver health. In one study, Gotu kola was found to help protect liver cells from oxidation. It also made the liver cells stronger against other injury.

While it has not been studied at length in humans there is some evidence that Gotu koma may also be helpful for hepatitis. A 1979 French study found it helped 5 out of 12 patients.

There will certainly be more medical benefits found as researchers continue their discovery of this ancient medicine. But why is this one herb so helpful?

These triterpenoids in Gotu kola are considered phytoanticipins because of their anti-bacterial nature. They interfere with the growth of viral and bacterial infection. They also produce a number of metabolites in the body that alter the body’s metabolism for the better.