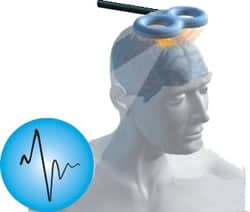 In an Australian first, researchers are studying Magnetic Seizure Therapy (MST) as an alternative treatment for the 30 per cent of patients suffering from depression who don’t respond to traditional treatment.

The study, led by researchers from the Monash Alfred Psychiatry Research Centre (MAPrc) and funded by beyondblue and the National Health and Medical Research Council (NHMRC), has been published in two leading journals:Psychiatry Research: Neuroimaging and Depression and Anxiety. Both papers are a result of the same study.

MAPrc Deputy Director Professor Paul Fitzgerald, who led the study, said depression was a common and disabling disorder, affecting up to one in five Australians during their lifetime.

“Electroconvulsive Therapy (ECT) is one of the only established interventions for treatment resistant depression,” Professor Fitzgerald said.

“But use of ECT is limited due to the presence of memory-related side effects and associated stigma.”

For this reason, the MAPrc researchers began exploring new treatment options. MST is a brain-stimulation technique that may have similar clinical effects to ECT without the unwanted side effects.

“In MST, a seizure is induced through the use of magnetic stimulation rather than a direct electrical current like ECT. Magnetic fields are able to pass freely into the brain, making it possible to more precisely focus stimulation,” Professor Fitzgerald said.

“By avoiding the use of direct electrical currents and inducing a more focal stimulation, it is thought that MST will result in an improvement of depressive symptoms without the memory difficulties seen with ECT.”

Research is still at an early stage and MST is only available in a handful of locations worldwide. The MAPrc is the only centre in Australia conducting trials with this therapy.

“MST shows antidepressant efficacy without apparent cognitive side effects. However, substantial research is required to understand the optimal conditions for stimulation and to compare MST to established treatments, including ECT,” Professor Fitzgerald said.

“In order to accurately assess the comparable efficacy of MST to ECT, large-scale randomised controlled trials are required. There remains considerable work to be done before statements of the relative efficacy of these treatments can be made.”

Professor Fitzgerald and his team have received more funding from beyondblue and the NHMRC to carry out a large-scale trial on MST as an alternative treatment for depression.

… and in a related story

Patients Tell How Magnetic Therapy Lifted Their DepressionThree patients who have suffered periodic major depression throughout their adult lives told an audience attending a Loyola Grand Rounds presentation how their lives have been transformed by a new magnetic therapy.

The treatment, called transcranial magnetic stimulation (TMS), sends short pulses of magnetic fields to the brain.
“I feel better now than I have in a very long time,” said patient Jannel Jump. “I’m living a life now, rather than hiding from it.”

Another patient said TMS brought him out of a depression so severe he couldn’t get out of bed.

And a third patient said TMS “has helped me to have a glass-is-half-full outlook. I’m in a much better spot today.”
The Food and Drug Administration approved TMS in 2009 for patients who have major depression and have tried and failed at least one antidepressant. The FDA has approved one TMS system, NeuroStar®, made by Neuronetics, said Dr. Murali Rao, MD, DFAPA, FAPM, Chairman of the Department of Psychiatry and Behavioural Neurosciences at Loyola University Chicago Stritch School of Medicine.

The patient reclines in a comfortable padded chair. A magnetic coil, placed next to the left side of the head, sends short pulses of magnetic fields to the surface of the brain. This produces currents that stimulate brain cells. The currents, in turn, affect mood-regulatory circuits deeper in the brain. The resulting changes in the brain appear to be beneficial to patients who suffer depression.

Each treatment lasts 35 to 40 minutes. Patients typically undergo three to five treatments per week for four to six weeks.

The treatments do not require anaesthesia or sedation. Afterward, a patient can immediately resume normal activities, including driving. Studies have found that patients do not experience memory loss or seizures. Side effects may include mild headache or tingling in the scalp, mostly during stimulation.

Together, psychotherapy and antidepressants result in complete remission in about one-third of patients who suffer major depression. TMS is a non-invasive treatment option for the other two-thirds of patients, who experience only partial relief from depression or no relief at all, Rao said. He noted that TMS is recommended by the American Psychiatric Association’s 2010 Treatment Guidelines.

Rao said treatment reports from 41 TMS treatment centres show that about 33 percent of TMS patients who previously had been treatment-resistant reported their depression had significantly lessened or gone away completely. This success rate is about twice as high as the success rate of patients who have tried three or more antidepressants. Loyola recently began recruiting for a study on whether TMS can benefit patients who suffer from both depression and debilitating tinnitus (ringing in the ears).