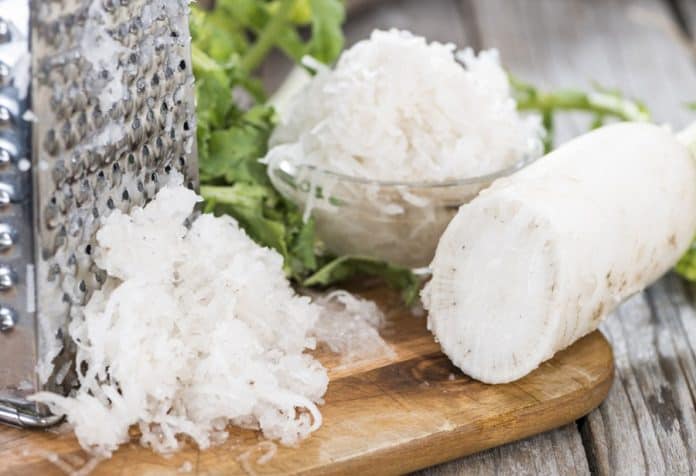 A recent study has revealed the cancer-fighting properties of horseradish, making it the latest “superfood” to be added to the list of natural cancer treatments discovered in recent years. A research team at the University of Illinois was the first to document the activation of cancer-fighting enzymes called glucosinolates, which are found in horseradish and other cruciferous vegetables.

“Glucosinolates constitute a natural class of organic compounds that contain sulfur and nitrogen and are derived from glucose and an amino acid. …

“Early indications are that glucosinolates activate enzymes that help remove cancer-associated free-radicals from the body. In a sense, the breakdown of glucosinolates in the body leads to the detoxification of cancer-causing molecules.

“Free radicals are highly reactive chemicals that have the potential to harm cells, and while they are formed naturally in the body, at high concentrations they can be hazardous and damage all major components of cells, including DNA, proteins, and cell membranes which may play a role in the development of cancer.”

What makes horseradish particularly promising in fighting cancer is the fact that it contains ten times as many glucosinolates as broccoli, and up to 90 percent of its beneficial compounds are absorbed when ingested.

The researchers had previously identified the active cancer-fighting compounds found in horseradish, but the new study focused on measuring the products of glucosinolate hydrolysis, which “activate enzymes involved in the detoxification of cancer-causing molecules.”

“There was no information on whether the USDA grade of the horseradish root is associated with cancer preventive activity, so we wanted to test that,” said crop scientist, Mosbah Kushad.

“The two compounds differ, with CETP being a comparatively weaker cancer-fighter than AITC. Still, the detection of CETP in horseradish is noteworthy, according to Kushad. ‘To our knowledge, this is the first detection and measurement of CETP from horseradish,’ he says.”

Some studies have suggested that eating large amounts of cruciferous vegetables can lead to hypothyroidism, but having several servings a week should cause no problems.

From the Linus Pauling Institute:

“One study in humans found that the consumption of 150 g/day (5 oz/day) of cooked brussels sprouts for four weeks had no adverse effects on thyroid function.

The bottom line is that more and more studies are proving that natural foods are key in the prevention and treatment of cancer. Many of these superfoods have been shown to be more effective than chemotherapy and radiation in fighting and preventing the return of cancer.

Even mainstream scientists are finally admitting that natural cures for cancer exist, and often perform better than toxic drugs and radiation treatments.

The Big Pharma cancer industry is finally being exposed as a fraud. Nature offers us everything we need to remain healthy.

By minimising exposure to carcinogens in our environment, and through eating the right types of foods, we can live long, healthy and cancer-free lives.