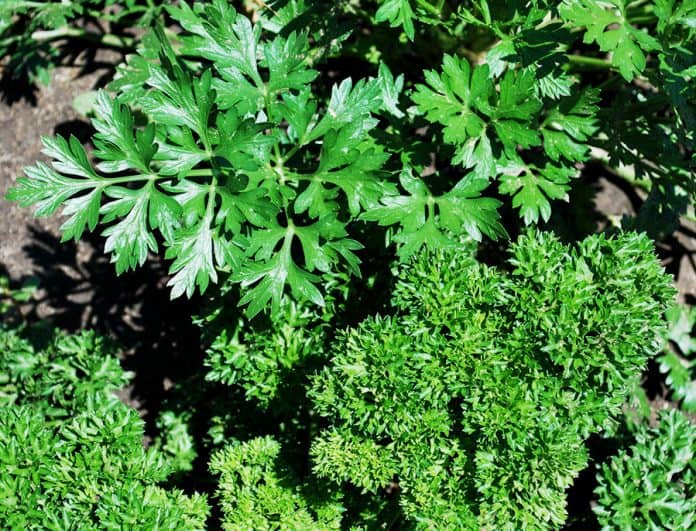 Parsley may be a great garnish – and it can seriously freshen the breath. But research proves that parsley also boosts the immune system, reduces inflammation and fights off cancer. Multiple studies show that Parsley (Petroselinum crispum) contains significant anti-inflammatory properties, boosts liver health, is an antioxidant and is even anti-carcinogenic. It also supplies numerous nutrients to the body and relaxes smooth muscles.

A 2017 study from Germany’s University of Rostock studied parsley root extract. They tested the extract against malignant and benign breast cancer cells.

This and other research has connected parsley’s apigenin to cancer inhibition. Apigenin is a flavone. A 2016 study from Texas A&M University found that apigenin from parsley inhibited the growth of uterine cancer cells.

Research published in 2011 from China’s Jiangsu Polytechnic College of Agriculture and Forestry found that apigenin also blocked the action of MEK kinase 1, which in turn prevented bladder cancer cells from migrating and thus inhibited tumour growth.

In this case, the apigenin compound was found with the ability to stop tumour growth by blocking tumours from creating blood vessels.

Hungarian researchers confirmed that parsley boosted the body’s ability to fight inflammation in a 2012 study.

The research found that parsley contained numerous nutrients and bioactive constituents, including several flavonoids and cumarins. They found that in addition to its anti-cancer properties, Parsley slows inflammation and neutralises oxidative radicals (free radicals).

Parsley’s ability to encourage healing has also been shown in other studies.

For example, a study published in 2012 from Turkey’s Hacettepe University Faculty of Medicine found that increased parsley consumption was associated with fewer complications after haematopoietic (bone marrow) stem cell transplantation in children.

In this study, the diets of 41 children who underwent the stem cell transplantation were analysed. Improved outcomes were seen among those eating more Parsley, as well as those children who ate onions, bulgur, yogurt and bazlama (a Turkish yeast bread).

Furthermore, Denmark’s Institute of Food Safety and Toxicology conducted a study in 1999 on 14 people using parsley. In two study periods, the subjects included about four milligrams of parsley every day for one of two weeks.

The researchers found that eating Parsley boosted levels of erythrocyte glutathione reductase and superoxide dismutase in the subjects. These two enzymes increase detoxification efforts of the body, as they help remove oxidisation agents that can harm tissues and blood vessels.

Parsley is rich in nutrients

Parsley is also rich in numerous antioxidant nutrients, including vitamin A, vitamin C, vitamin E, beta carotene, lutein, cryptoxanthin, zeaxanthin, and folate, and is one of the greatest sources of vitamin K, with 1640 micrograms per gram – over 12 times the U.S. DRI (dietary reference intake) of 90-120 micrograms per day.

One hundred grams of Parsley also contains more than double the RDA for vitamin C and almost triple the RDA of vitamin A.

Other bioactive constituents in Parsley include eugenol, crisoeriol, luteolin and apiin. Eugenol has been used by traditional doctors as an antiseptic and pain-reliever in cases of gingivitis and periodontal disease, and has been shown to reduce blood sugar levels in diabetics.

Cumarins are natural blood thinning agents, as they provide anti-coagulating properties. This can aid circulation, especially in cases of oedema (swelling). However, the cumarin content in Parsley is minor, and balanced by its many other nutrients. So it does not come with the side effects known for Warfarin and other isolated anti-coagulants.

The antioxidant nutrients in parsley have been shown in other research to reduce the oxidation of lipids, relating directly to vision disorders, heart disease, dementia and other inflammation-related conditions.