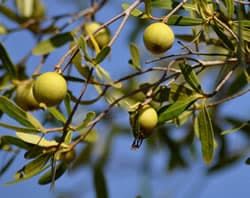 The kakadu plum, also called the gubinge or the billygoat plum, is a flowering plant native to Arnhem Land in northern Australia. Despite their name, the fruit of the kakadu plum plant – simply called kakadu plums – are more closely related to the almond than the plum, and they are unusual for fruit in-so-far as they remain on the plant after ripening. Australian Aboriginals have treasured the plums for thousands of years due to their health benefits, although the fruits are not well-known outside of their native country.

Undoubtedly the kakadu plum’s greatest claim to fame is that it contains the highest vitamin C concentration of any food on Earth. Indeed, a report by the Australian Government’s Rural Industries Research and Development Corporation shows that kakadu plums contain between 1,000-5,300 milligrams of vitamin C per 100 grams. This is approximately 100 times the vitamin C concentration of blueberries and oranges! Vitamin C is an important antioxidant that improves brain function and fortifies the immune system.

Kakadu plums contain phytochemicals such as ellagic and gallic acids. According to a study published in the March 2006 edition of Toxicological Sciences, gallic acid contains significant anti-inflammatory properties and can be used to treat inflammatory allergic diseases. Moreover, a study published in the January/February edition of Anticancer Research showed that ellagic acid can kill cancer-causing cells and lower oestrogen’s role in contributing to breast cancer.

Despite their relative obscurity as a whole food, kakadu plums (or rather, their extracts) are starting to become more common in international cosmetic products. This is because the fruit contains a large amount of trace minerals and antioxidants that nourish and invigorate the skin, including vitamin E, zinc, iron, folate, lutein, and the vitamin C. Antioxidants like vitamins C and E are especially important for skin health because they neutralise cell-damaging free radicals, thereby guarding it from the premature ageing effects associated with such damage.

Rich in calcium and magnesium

Kakadu plums contain respectable amounts of calcium and magnesium. The importance of calcium for building bones and teeth is well-known, but most people don’t realise that we also need magnesium to help us absorb that calcium. Since these fruit contain both, they are an excellent guard against osteoporosis and other bone-related conditions.

Kakadu plums are rich in dietary fibre, a plant food that clears accumulated waste from the colon and induces intestinal peristalsis. This makes kakadu plums a superb natural cure for constipation. Also, since fibre absorbs water from the colon, it also contributes towards a feeling of fullness. This fact, coupled with their low calorie and fat content , makes them an effective weight loss food.