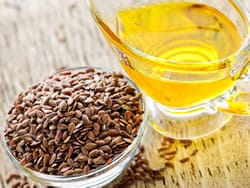 There’s a good reason why nutritionists consider omega-3 and omega-6 fatty acids to be “essential” acids. These polyunsaturated fats, which are responsible for building cells and maintaining nerve and brain function, cannot be manufactured by our bodies. This means that we must obtain them from food sources in order to remain healthy.

Unfortunately, since the advent of processed vegetable and seed oils, the average Westerner consumes far more omega-6 acids than omega-3 acids. In fact, the average ratio between omega-6 and omega-3 acid intake in the West is estimated to be 16:1, which is much higher than the optimum ratio of between 1:1 and 4:1.

Since omega-6 acids contain pro-inflammatory properties, this severe imbalance can cause a large number of related health problems such as cardiovascular disease. Therefore, it’s important that we maintain an optimum omega-3 to omega-6 acid ratio at all times.

The first step toward achieving an optimum fatty acid ratio is, of course, to consume more whole foods that are rich in the beneficial omega-3 fatty acids in which most of us are deficient. However, this is not as simple as it sounds.

Firstly, many foods that are rich in omega-3 acids also contain much higher amounts of omega-6 acids, and will thus actually contribute toward a further imbalance.

Secondly, the preformed, long-chain omega-3 fatty acids found in animal products – eicosapentaenoic acid (EPA) and docosahexaenoic acid (DHA) — are much more potent than the short-chain omega-3 fatty acid — alpha-linolenic acid (ALA) – found in plant foods. Indeed, our bodies need to convert ALA into the more active EPA and DHA before it can be used, and this conversion is inefficient at best.

Sadly for vegetarians, this means that animal products are the best sources of omega-3 fatty acids. This is especially true of oily fish such as mackerel, salmon and sardines, though most seafood and products from grass-fed animals (such as butter, lard, eggs and meat) also contain EPA and DHA. Fish oil supplements are an excellent choice as well.

The best plant-based source of omega-3 fatty acids is probably flaxseed, since flaxseed contains an acceptable omega-6 to omega-3 ratio of 5:1. However, most other seeds and their oils, such as peanuts and sesame seeds, provide much more omega-6 than omega-3, making them unsuitable for correcting an imbalance. For this reason, most vegetarians and vegans will benefit from a dedicated EPA and DHA supplement.

The easiest way to reduce our intake of omega-6 fatty acids is to avoid consuming the processed vegetable and seed oils that are rich in it.

The worst offenders in this category are canola oil, sunflower oil, safflower oil, corn oil, soybean oil and cottonseed oil. These “foods” have only been around for a century, and we are not genetically adapted to consume them.
Moreover, most of them are made from crops that are usually genetically modified and/or heavily sprayed, making them even unhealthier. Coconut oil and olive oil are relatively low in omega-6 acids, however, and provide countless health benefits.

Finally, it’s important to source our meat from organic farms that feed their animals a grass-based diet. Studies have shown that the meat of animals that are fed grain-based diets contain fewer omega-3 fatty acids, and more omega-6 fatty acids, than their grass-fed counterparts.