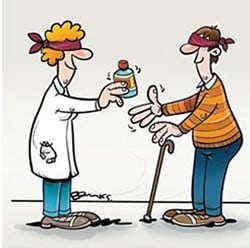 Two recent books have rightfully taken the pharmaceutical industry to task for hiding up to 50% of clinical trial data. One potential solution to this problem – the highly publicised UK AllTrials initiative – may actually make things a great deal worse by placing academia into the hands of pharma marketing departments. Is it time to think again about the randomised, controlled clinical trial (RCT)?

Both authors demonstrated beyond any doubt that pharma is out of control, and offered potential solutions. Dr Gøtzsche was far more ruthless than Dr Goldacre, however, and his solutions were considerably more radical: his starting point is that society should be ‘demedicalised’ from its present reliance on unnecessary drugs, beginning with the individual; while Dr Goldacre remains convinced that drugs are absolutely necessary and that “some simple fixes…would put all this behind us…globally, at almost no cost”. Said fix being to force pharma companies to publish all of their clinical trial data, rather than the disgraceful 50% they currently deem suitable for the eyes of the great unwashed – a solution that also forms part of Dr Gøtzsche’s package. Dr Goldacre’s chosen mechanism to achieve this is theAllTrials initiative.

GSK is all smiles at AllTrials

AllTrials scored a notable success when drug giant GSK signed up in February 2013. So is AllTrials all it’s cracked up to be? No-one that we’re aware of is arguing against greater transparency in clinical trials data. However, the devil is in the details: exactly by what mechanisms, under what terms and through what channels will researchers gain access to pharma company data in a new era of ‘full’ transparency?

One man who has considered these questions in enormous depth is Professor David Healy, author of Pharmageddon and founder of the side effect-reporting website Rxisk. He points out – under a forceful title! – that the GSK ‘model’ of universal data access would actually be a disaster for clinical trial transparency and academia alike. The reason is simple: GSK select which researchers see which data and how they are allowed to analyse those data. As Prof Healy spits in disgust: “GSK’s maneuver [sic] has put industry well on the way to making Academia a ghost, a glove puppet manipulated by company marketing departments”.

What’s worse, Prof Healy says, is that the European Medicines Agency (EMA) has adopted the same scheme, placing the ‘GSK model’ firmly on the path toward respectability and universal acceptance. If true – and the EMA is denying any “change in direction” over transparency in response to concerns expressed by the European Union Ombudsman – then the credibility of AllTrials is about to crumble to nothing.

Caution: Unrecognised pachyderm in the vicinity

The elephant in the room here is the bedrock upon which the entire discussion is built: the randomised, controlled clinical trial (RCT). Governments and health authorities love ‘em, because they appear to give clear, simple, numerical answers to tricky questions of clinical practice and drug efficacy.

Yet, when clinicians and researchers as diverse as Drs Goldacre, Gøtzsche and Healy are increasingly questioning RCTs – Prof Healy even wonders whether RCTs may be the greatest marketing scam ever devised by pharma – something’s not quite right with the mainstream narrative.

Along with a growing band of academics, doctors and other health professionals, we think it’s time to look beyond the RCT and the unilateral, drug-based treatments it was originally designed to study, and which it is incapable of looking beyond.

Its flaws are there for all to see, prime among them its highly artificial nature and focus on the ‘specific treatment effect’ rather than the multi-factorial, healing symphony as a whole.

Options that examine treatments under real-world conditions, such as comparative effectiveness research (CER), already exist, waiting to be more widely adopted and further developed. Importantly, it is tools like CER that are best suited to assessing the multi-pronged diet, lifestyle and natural health modality-based treatment programmes that can arrest our current slide into a future marked by chronic disease. RCTs simply cannot do this.