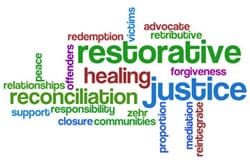 Tommy, an agitated 14-year-old high school student in Oakland, Calif., was in the hallway cursing out his teacher at the top of his lungs. A few minutes earlier, in the classroom, he’d called her a “b___” after she twice told him to lift his head from the desk and sit up straight. Eric Butler, the school coordinator for Restorative Justice for Oakland Youth (RJOY—the author is executive director of the organisation) heard the ruckus and rushed to the scene. The principal also heard it and appeared. Though Butler tried to engage him in conversation, Tommy was in a rage and heard nothing. He even took a swing at Butler that missed. Grabbing the walkie-talkie to call security, the principal angrily told Tommy he would be suspended.

“I don’t care if I’m suspended. I don’t care about anything,” Tommy defiantly responded. Butler asked the principal to allow him to try a restorative approach with Tommy instead of suspending him.

Butler immediately began to try to reach Tommy’s mother. This angered Tommy even more. “Don’t call my momma. She ain’t gonna do nothing. I don’t care about her either.”

“Is everything OK?” The concern in Butler’s voice produced a noticeable shift in Tommy’s energy.

“No, everything is not OK.”

“What’s wrong?” Eric asked. Tommy was mistrustful and wouldn’t say anything else. “Man, you took a swing at me, I didn’t fight back. I’m just trying my best to keep you in school. You know I’m not trying to hurt you. Come to my classroom. Let’s talk.”

They walked together to the restorative justice room. Slowly, the boy began to open up and share what was weighing on him.

His mom, who had been successfully doing drug rehabilitation, had relapsed. She’d been out for three days. The 14-year-old was going home every night to a motherless household and two younger siblings. He had been holding it together as best he could, even getting his brother and sister breakfast and getting them off to school. He had his head down on the desk in class that day because he was exhausted from sleepless nights and worry.

After the principal heard Tommy’s story, he said, “We were about to put this kid out of school, when what he really deserved was a medal.”

Eric tracked down Tommy’s mother, did some prep work, and facilitated a restorative justice circle with her, Tommy, the teacher, and the principal. Using a technique borrowed from indigenous traditions, each had a turn with the talking piece, an object that has a special meaning to the group. It moves from person to person, tracing a circle. The person holding the talking piece is the only one talking, and the holder speaks with respect and from the heart.

Everyone else in the circle listens with respect and from the heart.

As Tommy held the talking piece, he told his story. On the day of the incident, he had not slept, and he was hungry and scared. He felt the teacher was nagging him. He’d lost it. Tommy apologized. He passed the talking piece to his teacher and heard her story.

Earlier in the year another student had assaulted her. She was terrified it was about to happen again with Tommy. After the incident with Tommy, as much as she loved teaching, she had considered quitting. Tommy apologized again for the outburst and offered to make amends by helping her with after-school chores for the next few weeks. The teacher agreed to show more compassion in the future if she noticed a student’s head down on the desk.

Taking responsibility, Tommy’s mother apologized to her son and all present. She rededicated herself to treatment and was referred to the campus drug rehabilitation counselor. After the circle and with follow-up, Tommy’s family life, grades, and behavior improved. The teacher remained at the school.

Nelson Mandela’s adage, “I destroy my enemies when I make them my friends,” captures the profoundly inclusive nature of restorative justice (RJ). The hallmark of RJ is intentionally bringing together people with seemingly diametrically opposed viewpoints—particularly people who have harmed with people who have been harmed—in a carefully prepared face-to-face encounter where everyone listens and speaks with respect and from the heart no matter their differences. The talking piece is a powerful equalizer, allowing everyone’s voice to be heard and honored, whether that of a police officer, a judge, or a 14-year-old youth.

If the school had responded in the usual way by suspending Tommy, harm would have been replicated, not healed. Punitive justice asks only what rule or law was broken, who did it, and how they should be punished. It responds to the original harm with more harm. Restorative justice asks who was harmed, what are the needs and obligations of all affected, and how do they figure out how to heal the harm.

Had punitive discipline ruled the day, Tommy’s story would have gone unheard and his needs unmet. Had he been suspended, Tommy’s chances of engaging in violence and being incarcerated would have dramatically increased.

Suspension likely would have exacerbated harm on all sides—to Tommy, his teacher, his family, and ultimately, his community. His teacher would have been deprived of hearing Tommy’s story. She might have quit teaching and remained trapped in trauma.

If Tommy had been suspended and left unsupervised—as most suspended students are—he would have been behind in his coursework when he returned. Trapped in an under-resourced school without adequate tutoring and counselling, Tommy would have had a hard time catching up. According to a national study, he would have been three times more likely to drop out by 10th grade than students who had never been suspended.

Worse, had Tommy dropped out, his chances of being incarcerated later in life would have tripled. Seventy-five percent of the nation’s inmates are high school dropouts.