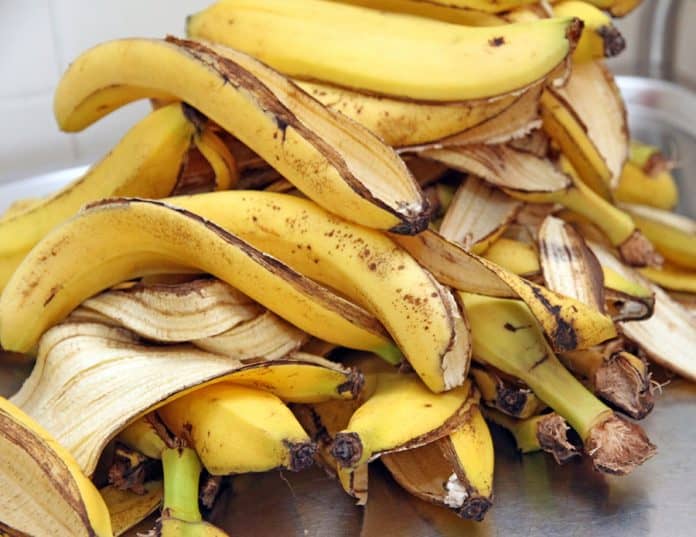 There is a cheap and easy way for any community in the developed (or underdeveloped) world to purify their water. The peels of some of the most widely consumed fruits in the world are remarkably efficient at absorbing a wide variety of harmful pollutants, including heavy metals, and they can be transformed into effective water filters with only minor preparation.

Minced banana peels could be used repeatedly to purify water contaminated by industrial plants and farms — up to 11 times — and still be effective. In their study paper entitled “Banana Peel Applied to the Solid Phase Extraction of Copper and Lead from River Water: Preconcentration of Metal Ions with a Fruit Waste” researchers also noted the very low cost of banana peels and the fact there is no need to prepare them chemically for the water purification procedure.

Gustavo Castro and colleagues note that mining processes, runoff from farms, and industrial wastes can all put heavy metals, such as lead and copper, into waterways. Heavy metals can have adverse health and environmental effects. Current methods of removing heavy metals from water are expensive, and some substances used in the process are toxic themselves.

Compounds in banana peels contain atoms of nitrogen, sulphur and organic compounds such as carboxylic acids. These acids are charged such that their negatively charged electron pairs are exposed, meaning they can bind with metals in the water that usually have a positive charge, Castro explained.

Researcher Ramakrishna Mallampati originally thought up this method as an easy, cheap way for rural communities in the developing world to purify their water. He found that apple and tomato peels — two of the most widely consumed fruits in the world — were remarkably efficient at absorbing a wide variety of harmful pollutants, and that they could be transformed into effective water filters with only minor preparation.

To make use of Mallampati’s technique yourself, begin by peeling your apples and tomatoes and placing them in a rubbing alcohol solution and letting them soak. Next, remove the peels and let them dry out. Once they’re thoroughly desiccated, simply place the peels in a container of water and wait. After a few hours, remove the peels from the water and it’s ready to drink.

In 1972, the researchers worked on the development of a new filter approach in Thailand which on a laboratory scale appeared to have wide application for both water purification and wastewater treatment in Southeast Asia. This appropriate technology type filter consists of two stages. The first is made up of the fibres from shredded coconut husks to filter out the bulk of suspended solids from the water. The second is a bed of burnt rice husks to “polish” the water removing residual turbidity and other contaminants. The filter thus utilises local materials that are both widely available and inexpensive enough to discard after use, thus eliminating backwashing. The media are used in series so that filtration alone can do the job in most cases without the use of chemicals. In addition, with burnt rice husks as a filtering medium, the process includes significant absorption capability for taste, odour, and colour removal.

A natural, cheap and effective water purifier for the world.

Solar disinfection of water combined with almost any type of citrus is very effective at reducing dangerous E. coli levels, however limes seem to work best. A recent study published by the Johns Hopkins University School of Medicine found that adding lime to water that is being disinfected by the sun speeds up the disinfection process.

The preliminary results of this study shows solar disinfection of water combined with citrus could be effective at greatly reducing E. coli levels in just 30 minutes, a treatment time on par with boiling and other household water treatment methods.

In addition, the 30 millilitres of juice per 2 litres of water amounts to about one-half Persian lime per bottle, a quantity that will likely not be prohibitively expensive or create an unpleasant flavour.

NB. Please note that these methods do not remove all pathogens from the water, just a wide variety of pollutants, so they shouldn’t be used as all-encompassing water purifiers.