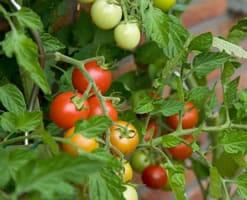 Many people use their table scraps for compost, to grow lusher, thicker, more productive gardens or to feed chickens, but now you may soon be able to cut your power bill with food scraps.

As reported by the UK’s Daily Mail, American scientists have discovered a way to generate electricity using rotting or damaged fruit and vegetables, by converting them into a biological-based fuel cell to create green energy.

At the same time, unsold food from grocery stores and markets, as well as spillage, spoilage and damaged food that can’t be sold can be used to create biological fuel cells.

“We have found that spoiled and damaged tomatoes left over from harvest can be a particularly powerful source of energy when used in a biological or microbial electrochemical cell,” Namita Shrestha, a PhD student at the South Dakota School of Mines and Technology said.

“The process also helps purify the tomato-contaminated solid waste and associated waste water,” she added, according to the Daily Mail.

Dr. Venkataram Gadhamshetty, an assistant professor at the school who is heading up the research project, said tomatoes are one of Florida’s largest crops. Every year the state produces some 396,000 tons of tomato waste, but so far does not have a sensible or effective treatment process for it. If science managed to harness that waste and convert it into power, it could, for example, provide enough electricity to operate Disney World for three months.

“We wanted to find a way to treat this waste that, when dumped in landfills, can produce methane – a powerful greenhouse gas …” he said.

The resulting research has been the development of microbial gel batteries that utilise tomato waste to generate current. “Microbial electrochemical cells use bacteria to break down and oxidise organic material in defective tomatoes,” explained Shrestha.

There is an oxidation process involved that is triggered by bacteria that interacts with tomato waste and releases electrons that are then captured in the fuel cell, becoming a source of electricity.

A pigment called lycopene that is found in tomatoes has proven to be an excellent medium for the generation of electrical charges from damaged fruit. Gadhamshetty said that some of the study’s findings were very much unexpected.

“Typical biotechnological applications require, or at least perform better, when using pure chemicals, compared to wastes,” he said. However we found that electrical performance using defective tomatoes was equal or better than using pure substrates.

“These wastes can be a rich source of indigenous redox mediators and carbon, as well as electrons,” he continued.

For now, the output power of the device the research team has constructed is very small; about 10 milligrams of tomato waste producing 0.3 watts of electricity, meaning about 200 cells would be required to power a 60-watt light bulb. But the team believes that they can upscale their research and boost their production of electricity by several orders of magnitude.

“Their calculations show there would be enough tomato waste produced in Florida each year to power Disney World for 90 days, using an optimised biological fuel cell.”

“Our research question at this time is to investigate the fundamental electron transfer mechanisms and the interaction between the solid tomato waste and microbes,” Gadhamshetty concluded.

The team’s findings were presented at the 251st National Meeting and Exposition of the American Chemical Society.

Earlier reports have noted that biofuels are more efficient generators of electricity, and would actually outperform biomass that is converted into inefficient ethanol.

A study published in the journal Science in 2009 said findings “suggest that transportation policies in the United States and Europe that seek to address climate change may allow vehicles to travel farther and offset more greenhouse gas emissions if biomass resources were used to charge electric vehicles,” the Worldwatch Institute reported, citing the study’s conclusions.