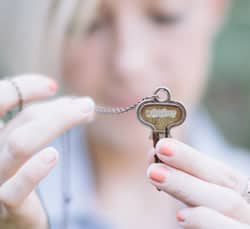 This week a woman in Texas learned that a mother in Oklahoma had been leaving McDonald’s with her two young sons when they were struck by a car. Her youngest son, just three-years-old, was killed. The women’s lives had crossed briefly three years before, when they bonded at a wedding, both being pregnant.

The woman knew then who she would give her key to. She wrote the definition of courage on a card and she and her husband drove across three states (460 milse) to be with the grieving family, and to pass along the small key engraved with the word “courage.”

And so The Giving Keys go. A person purchases a key engraved with a word they feel may be lacking in their life. Faith. Hope. Courage. Fight. Dream. They wear the key, embrace the message, and when the moment has come that someone else seems to need the word more, they pass the key forward. And then they go back to The Giving Keys site and tell their story.

The Giving Keys began receiving stories from people who’d given keys and people who’d received keys. Keys have circulated through all different walks of life from people in chemotherapy wards fighting cancer to college students setting out on their own for the first time. But the business, which began out of complete happenstance, has evolved into something bigger than its founder could have ever even imagined.

L.A.-based singer-songwriter and actress Caitlin Crosby grew up in Hollywood. Early on she remembers feeling overwhelmed by the vanity of the industry. To rebel, she’d tell her parents she was going to a party, and then sneak off to the youth group. She always knew she wanted to do something that made a difference, but didn’t know what that something was. She found herself, like so many do, overwhelmed by the weight and pervasiveness of some of the world’s biggest problems—unsure of what one person could actually do to make a difference.

But The Giving Keys seemed to come effortlessly. One day, while on tour, Caitlin wore her hotel room key around her neck to a show. She decided she’d take it to a locksmith and get it engraved. Over time, she began engraving more keys and selling them at her merchandise table. Soon the keys were selling out. She knew then that she had stumbled upon something significant.