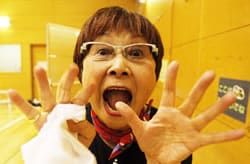 Healthcare systems across the world, and especially in the industrialised countries, are under increasing pressure – thanks, we are told, to the ‘burden’ of an ageing, infirm population. So does that mean that living longer isn’t sustainable? Should we, in fact, feel pangs of guilt for making diet, lifestyle and health management choices that will help us to live longer, healthier, happier lives? We say: absolutely not!

“People are living longer – and that’s just not sustainable”

With the population profiles of industrialised countries becoming increasingly top-heavy, such soundbites are the catch-cry of politicians, economists, pension fund owners, social care providers and others – the self-appointed managers of our ageing societies. But, as so often in life, it isn’t that simple. As an example, let’s take the most recent Eurostat statistics. They show only a marginal increase in life expectancy for Europeans (Figure 1) over the last decade or so, mostly due to massive reductions in infant mortality (Figure 2). Far less sustainable than our increasing lifespans are the high rates at which we are becoming diseased and incapacitated. As years, and often lifetimes, of inappropriate diet and lifestyle wreak their effects upon Western populations, heart disease and diabetes – two of the biggest burdens on healthcare systems – afflict people at ever-younger ages.

Keeping people alive is an expensive business; in general terms, the longer we live, the more it costs. But a brief examination of healthcare spending reveals another paradox. For having the largest per-capita healthcare spend by a country mile, at over US$7,000, the average US citizen gets to live for about 78 years. That’s exactly the same life expectancy as the average Chilean, yet Chile’s healthcare spend is around one-seventh of the US’. The Brits lavish about 50% of what their cousins spend across the ‘pond’, yet live for over 1 year longer on average. But the really interesting figure comes from Japan. With a modest spend of $3,000 per person, the Japanese have the world’s longest life expectancy: nearly 83 years.

So what are the reasons for the Japanese longevity premium? Ingeniously designed drugs, perhaps, as yet restricted to the Japanese market? Trailblazing surgical techniques that leave the rest of the world eating Japanese dust? Simply better medical education? Nope: experts are agreed that it’s mainly down to the quality and type of food and drink the Japanese put into their mouths during the course of their lives. Clearly, anyone seeking to draw a straight line between the extent of a country’s healthcare spending and the duration of its citizens’ stay on this planet will be disappointed.

Quality, not quantity, is the issue

What all this means is that life expectancy per se isn’t the problem. It’s much more about the quality of the lives we lead. Chronic disease of one form or another, born out of bad diets, inadequate physical activity and inappropriate lifestyles, now affects more than half of the over-50s in most Western countries. This is incredibly costly, not only because of the direct cost of managing a diseased population, but also because those with chronic disease cannot contribute to economic productivity. Healthy people, by contrast, aren’t a burden on society, especially if they can continue working and paying their taxes.

In the longer term, the same processes that lead to chronically diseased societies have an even more damaging effect. Not only are people living fewer healthy life-years, they are also becoming less fertile. Human societies may have hit upon the perfect recipe for disaster – one that makes them so sick that they can no longer replace themselves.

One might have thought that, with this evidence in plain sight, governments and health services would have developed rational proposals aimed at reversing the tide of ill-health and infertility. Not so, unfortunately. In Europe, we’ve recently been witness to the spectacular failure of the EU’s 5-year Strategy on Nutrition, Overweight and Obesity-related Health Issues. Over 30% of the adult population of the EU is now overweight or obese in the face of an avalanche of top-down EU policy. Some EU policy goes beyond the realm of failure and into that of health sabotage – most notably the dreaded Nutrition and Health Claims Regulation (NHCR; No. 1924/2006).

Presently creating a virtually information-free zone of the EU’s food and food ingredient marketplace, the NHCR has – among numerous other crimes – stripped the word ‘antioxidant’ from the label of every single fruit and berry product.

Neither will any consumer will see any information about the benefits of coenzyme Q-10 on heart health, nor will the young be persuaded to take curcumin or resveratrol, despite the fact their hollow calories and increasingly simplified diets are screaming out for such functional nutrients.

Regaining control of our destiny

As history has shown us countless times through the ages, governments can never successfully extinguish our right to manage our health through natural means. We simply need to become more resourceful, even if authorities have sometimes forced the use of the requisite natural products underground.

One big difference today is that the science is strongly on our side.

Diet, lifestyle and self-healing are the most powerful weapons we have against all the killer diseases that are crippling healthcare systems everywhere.