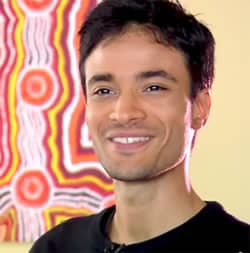 Shareable has published many stories about the gift economy and living without money. While they’re often inspiring and popular, they often bring up fear of survival. People ask, “Is this really possible for ME?” or “Will I become homeless or sick and die from poverty?” Personally, I’ve questioned whether living in the gift economy is realistic only for priviledged, healthy people.

And so I tracked down Brice Royer for an interview. Brice is a young, now voluntarily unemployed entrepreneur from Vancouver with stomach cancer. He not only depends on gift exchange to survive, but helps other people survive through the gift and prosthelytizes gift culture with much conviction.

He recently gave a speech alongside the Mayor Robertson of Vancouver on how economic inequality is bad for our health and why sharing is better. His courageous acts of generosity have sparked many others to join the gift economy movement and gained international attention.

His story resonates deeply with many people because he shows that not only can you live your values, but life might be so much happier, healthier, and more rich, even under adverse circumstances (i.e. the worst case scenario everyone worries about).

These kinds of stories can create such a dramatic psychological shift that some people (three I know personally) have changed careers to work on the new economy after hearing such stories. While not everyone can be just like Brice, he can help us take a little leap of faith that gets us all closer to an economy and culture we actually want to live in.

Mira Luna: What does gift economy mean to you?

For me, the gift economy is about family. It’s about not turning love into a business. I learned that the “gift economy” is just a term used by university professors to talk about what people in small towns do naturally and how ancient human societies lived. They help their families and their neighbours because they depend on one another, and it’s usually a community of around 150 people. You rarely see a strong sense of community in urban cities or gated communities because there’s less trust. Not surprisingly, the bigger the city and stronger the market economy, the more people are busy, stressed and isolated.

I suddenly realised that our dependence and need of money is correlated to our isolation from our community. The more I rely on money or trade to fulfill my needs, the more disconnected I become from others.

Loneliness and stress is the most underrated health factor for disease, so for me, the gift economy is an important way to reduce social stress and isolation which leads to healing.

On a mid-scale, it’s also a way for small businesses to reconcile and change the conversation on that inner conflict between passion and profits. On a larger scale, it’s a way for politicians and social activists to reform our economic system which is at the root cause of wealth inequality leading to many social ills like climate change.

What brought to you to the gift economy?

Cancer. My doctor told me I have a stomach tumour but didn’t know why. So I looked at the world’s healthiest places like Ikaria, Greece and Okinawa, Japan, which have the highest concentration of centenerians to learn how they live.

I was surprised to learn that almost all have gift economies, live close to family and have a strong community.

As an entrepreneur, I found this very surprising because it’s the complete opposite of what we’re taught in North America. We have more money and options, but we’re more sick. There’s something very odd about that. It wasn’t until I heard of Mark Boyle, a man in the UK who lived without money who felt healthier than ever before, that I was very interested in starting this experiment to live in a gift economy.

Last year, I began an experiment to heal myself from cancer by transitioning to a gift economy. I decided not to buy anything from strangers and impersonal companies as much as possible because I feel disconnected. It bothered me that I don’t know where my food comes from! All this stress, impersonal relationships and loneliness isn’t good for my health. So I decided to support and rely on my family, friends and local neighbours for my basic needs. I asked a friend, Carlos, to invite his friends so we could start a gift circle, and then met a mutual friend, Heidi Henderson who offered 1000 sq feet space at Vital Health Clinic for our first meeting where I met Peter Endisch, a programmer who offered me his car as a gift, which made the national news in Canada.

Another friend introduced me to a farmer who has been giving me vegetables. He never asked for anything in return. Now he needs help to get a tractor, so I decided to pay it forward, he was in the news recently and we all raised $12k in one day for him.

Later, he surprised me and got me in tears and decided to start a “Brice Royer cancer survivor” garden and will deliver food to cancer patients. It will help many of my friends who are in need. He can deliver pesticide free food to 25 people for the season for only $1000. That’s $13.33 for weekly food delivery for one person for the whole month, which is incredible. We are aiming to expand the free farm internationally. I’m still recovering but I wanted to share this in the hopes that it will inspire you. If anyone would like to get in touch, feel free to follow me on Facebook where I post my latest public updates on my recovery.

Why do you think so many people and the media are drawn to your story?

I’m not sure. There’s probably all sorts of reasons. Sometimes it’s because they read in the news that a stranger gave me a car, or that I paid a stranger’s rent for one year. These are big gifts that took a leap of faith. Other times it’s because they love the idea that a cancer patient thinks he can heal himself with acts of kindness. I guess it’s not often you hear stories like this!

People often say to me, “You’re right on the mark…” about the economic system. I think the truth resonates that there’s something wrong with our economic system and the way we treat each other. We all want to pay it forward, but don’t know if it’s practical. People are looking for practical alternatives just like I am.

What are some ways you’ve gotten your needs met by living in the gift and how has it changed your life?

I feel closer to family and friends than ever before. I consume less and notice I feel happier. It has also changed the way I am thinking about meeting my needs, or meeting other people’s needs. Instead of buying something, I simply ask myself a series of questions:

1. “Do I really need this?”
2. “Is there a sustainable alternative?”
3. “Do I have a family member or friend who provides this service or product?”

I met farmers from a mutual friend who offered me a gift of food which was the first time I knew where my food came from. As a result, I felt more connected, I now sleep better, and I feel generally happier than I’ve been in the last two years.

Relationships are not all fun and games though because it taught me to be emotionally resilient and go the extra mile, to be real with people, instead of isolating myself with the freedom and convenience that money provides.

Can you give me some more specific examples of things you’ve exchanged?

Sure. Here are some examples of gifts I’ve received: a few people offered me accommodation, including a doctor from New Zealand and a nurse named Jane; a car; a speaking opportunityalongside the Mayor of Vancouver (and carrots); 100 organic vegetables; a haircut; one stranger gave me $5 for my rent (and more); health services (nutritionists, doctors, healers, massage therapists, free DNA tests from 23andme, and more); a website for the gift economy (this website is gifted and uncopyrighted. It’s not mine, but I sometimes blog there).

Some gifts I have given or organized in addition to the free farm project include paying for some people’s dental care and someone got $700+ for her dental amalgam removal; a depressed dad got surprised by strangers; I offered to pay a stranger’s rent for a year, and I have shared $10k worth of other stuff.

But it’s very complex, like an onion with many layers. I recently talked to someone who mentioned her friend became a prostitute and the social taboo in society about it. But then I realised I am a prostitute too. What’s the difference between a prostitute and a person with a regular job? If I give you a price for my time, am I not prostituting my services too? We’re all prostitutes in a way, we just offer different services. Some of us are prostituting health services, legal advice, business services, and there’s even the commodification of friendship nowadays. Have you heard of life coaching? As long as I’m in the market economy, then I am a prostitute too.

Of course it’s not our fault, it’s the system we live in. It’s designed that way, unless you live in a smaller community. There are many doctors who can explain the impact of our economic system on our physical health better than I can, like Dr. Gabor Mate. I highly recommend his interview on how capitalism makes us sick. Another good statistic is how wealth inequality is bad for the health of both the rich and the poor by Equality Pledge UK.

Do you feel more or less secure living in the gift and why? How does gifting play into your sense of community?

A lot more connected. But it fluctuates and depends on the strength, connection and proximity of my relationships with my family and friends. I generally feel more secure when I make more effort to be connected. It feels great to give to people you care about. Investing in relationships has its own set of challenges and rewards. But it’s difficult to build relationships when you live in a city or in a country with wealth inequality where people are busy with day jobs. And it affects people of every social class. For example, I heard of someone who sold his company for $30 million and he was surprised at how socially isolating he feels after this sudden windfall.

I often tell people it’s the wealthiest of us who need to start a gift economy, to reconnect with our family, friends and community, because the poorest communities already understand the concept since they have no choice but to depend on the kindness of others out of necessity.