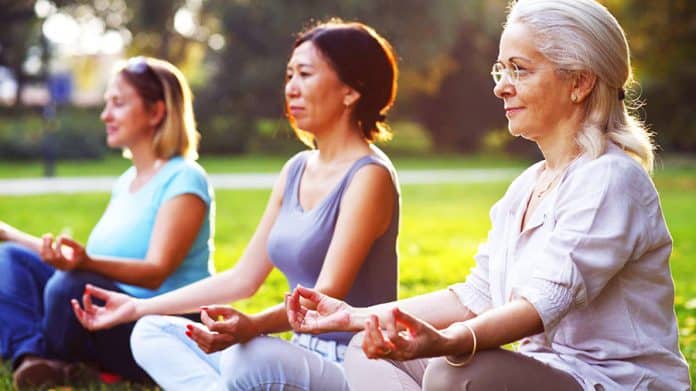 Yoga is a practice of physical, mental and spiritual disciplines. It originated in ancient India and is one of the main Hindu philosophical traditions. Yoga is considered the soul of India. It is meant to be a system which increases awareness and decreases diseases. There are many health benefits from practising yoga regularly, including weight loss, increasing energy, reducing stress, better breathing, peacefulness, and an increase in concentration and flexibility. Yoga is something that can be practised wherever you are and whenever you want to.

When a person reaches the age of 60, they can no longer work as efficiently and effectively as they did when they were younger. Though many people like to stay busy and continue working, sometimes the body struggles and for some people even normal daily chores become a challenge.People can suffer with aches, weakness, pains, malnutrition, depression and their bones and joints become weak. The practice of yoga will help boost their immunity. It unites the body, mind and the spirit to attain calm and peacefulness.

There are a few specificfew poses (asanas) which are suggested for senior citizens, which can help them feel younger and be more active, as well as avoiding age-related health issues.

BaddhaKonasana is popularly known as butterfly pose as the pose looks like a butterfly flapping it’s wings. It is also known as bound angle pose. It is a basic level asana in Vinyasa yoga. Practising it in the early morning on an empty stomachwill stimulate the bladder and kidneys which in turn helps bowel movement. It also activates the person, and can bring them out of mild depression and relieve anxiety. It stimulates abdominal organs and the heart which in turn improves general circulation, and the pose helps in stretching the inner thighs and knees. It is also considered therapeutic for high blood pressure, asthma and flat feet. According to the ancient traditional texts, it destroys disease and gets rid of fatigue.

Tadasana, also known as mountain pose, is the basic level of hatha yoga and is the basis of all the yoga asanas … which means that all other yoga asanas or poses are the variations of it. One can practise Tadasana during any time of the day. In general this pose is held for about 10 to 30 seconds. It is very helpful to improve posture, it strengthens weak thighs and ankles, improves digestion, and also increases blood circulation. It further helps relieve aches and pains due to age.

Bhujangasana, well known as the cobra pose, is an energising back bend which looks like a raised cobra head, and is a simple beginner level asana of Ashtanga. This pose makes older people sharp and swift. Practising it in the morning on an empty stomach or in the evening helps bowel movement. The pose only needs to be held for a couple of seconds or as long as the person feels comfortable. It helps to loosen a stiffened lower back and stretches the muscles in the chest, shoulders and abdomen to keep them healthy and flexible. This pose elevates the mood too. It increases body flexibility, strengthens the spine and avoids any hunching.

Balasana or child pose resembles the position of the child in the mother’s womb, and is from the beginner level of Vinyasa yoga. It is ideal to practise this in the early morning on an empty stomach, or in the evening4-6 hours after your meal. You just need to hold the position for 1-3 minutes or as long as comfortable. The benefits of this pose are that it helps releasetension which build up in fragile older bodies, specifically in the shoulders,chest and back. It also helps people to stay alert, it aids steady deep breathing, and calms and leads people to an anxiety-free life.

Shavasana or the corpse pose is a relaxing pose or asana done at the end of the yoga session. Since the body looks like a dead body or a corpse without any movement it is named shavasana. It is not as easy as it looks or as people think. It is quite challenging because one needs to calm down the mind completely and relax the body without fidgeting. It is considered as a beginner level of Ashtanga yoga asana. One should stay in this pose for about 10 to 15 minutes or more, but it is very important to make sure that you don’t fall asleep!

Shavasana helps to cure insomnia and common chronic problems in older people. Due to a lack of physical activity some bodies don’t tire enough to sleep well at night, therefore a quick session of yoga before sleep is a good remedy. It also helps improve concentration and enhance quality of life. It further has a curing effect for those who are suffering with weak mental health, constipation and diabetes.

AdhoMukhaSvanasana is also known as downward facing dog pose. It is a relatively easy pose or asana older people can try. It has a great impact on the bowelswhen practised early in the morning on an empty stomach, and is the one of the beginner level asanas of Ashtanga yoga. The pose should be held for a few seconds to a minute, or for as long as your body allows. It helps boost confidence, retains activeness in the body, and as an inverted pose allows more blood to flow to the brain, improving cognition, and making the brain less prone to forgetfulness.

Trikonasanaor the triangle pose is named for it’s assumed triangular look on the body of the person practising it. It is quite a simple pose and one among the few poses in yoga which require you to keep your eyes open during the pose. It helps bowel movement when practised in the early morning, and is from the beginner level of Vinyasa yoga. The pose should be held for 20 to 30 seconds or more, depending on how much your body permits. It helps in solving common issues faced by older people such as reducing blood pressure, decreasing fat from the waist and thighs, and keeping people light and fit. This pose gives stability and balance and prevents fidgeting and imbalance. It also helps to stretch and strengthen the arms and legs which in turn improvesthe quality of life for older people.