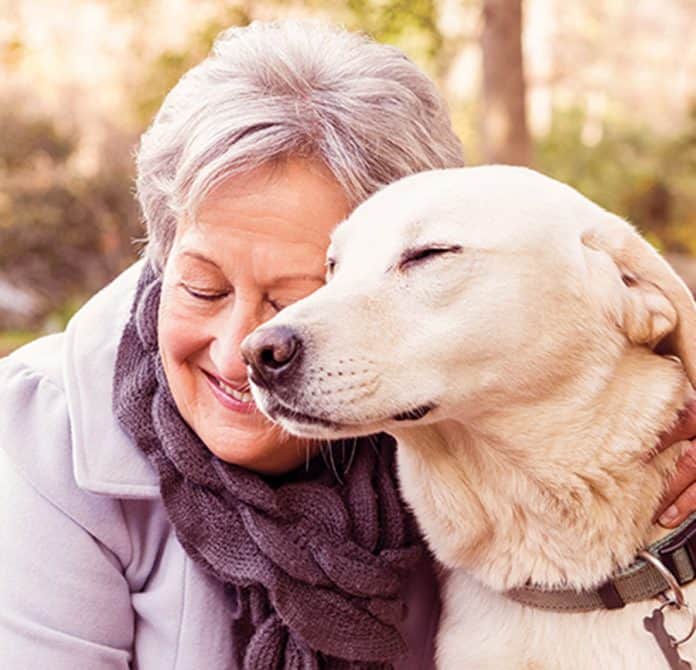 South Australian researchers are finding pets can help prevent suicide among people over 60 years with the presence of a dog, cat or budgerigar often enough to stop someone taking their life. The unexpected finding in research overseen by University of South Australia health sciences lecturer Dr Janette Young supports a push to introduce pet fostering in aged care homes.

“Pets offer a counter to many older people’s sense of uselessness,” Dr Young said, after publishing the new findings in the journal Anthrozoos.“ Animals need looking after which creates a sense of purpose for older people and they also promote social connections with other people.”

When Dr Young and her colleagues interviewed 35 people aged 60 to 83 years asking them “How do your pets influence your health?” one third of respondents reported that they were “actively suicidal” or “significantly traumatised” but their pets gave them a reason to live.

The data also supported Dr Young’s plan to introduce a new model to an aged care facility in Adelaide, South Australia where residents and staff were able to foster pets, particularly supporting elderly people having to move into care or hospital.

Dr Young and her fellow researchers reported that they had not anticipated that the question “How do your pets influence your health?” would lead to participants revealing suicide attempts or ideas around suicide.

To-date, their paper said, there was no other published research that has specifically revealed such links, although other research has revealed pets to be significant in recovery from suicide attempts for other people and as protective against suicide for abused women and homeless people.

One man involved in the research said: “I actually realised the only thing that is really keeping me alive, was these (nods to dogs) and the birds, giving me a chance to get out of bed in the morning.”

A significant proportion of those interviewed for the research were men who had revealed pets played a key role in protecting their mental health.

Dr Young said one male participant had a number of reptiles, including a crocodile, where he had sought contact with specialist groups in the community and was among only a few in the community able to care for its wellbeing.

“This is a particularly important finding. Men over the age of 85 have a high rate of suicide. It’s about finding things that are important in terms of wellbeing,” Dr Young said.

“Reptiles for example, are nocturnal, so if you have depression or can’t sleep at night who can be around to keep you company?”

Dr Young, whose background is in social work, said the blocking of pets happened early in aged care with some villages where people are still living independently in their own units being told they could not bring cats or dogs.

“We need to be taking these human animal relationships more seriously in that whole space of humanising aged care,” she said.

“Health and care providers need to understand the distress that many older people face when they have to relinquish their pets if they move into aged accommodation, lose their spouse or downsise their home.

“For some people, the loss of a pet may mean the loss of a significant mental health support, one that was perhaps even protecting them from ending their life.”

There is already much research globally showing pets can be social conduits, like dogs encouraging their owners to take them for walks in the neighbourhood or acting as an icebreaker in approaching others to start conversations.

One man involved in the new University of South Australia research kept exotic birds while one woman had a frill-neck lizard she trained to sit on her shoulder and the lizard was then incorporated into her work as a tour guide.

They revealed the key importance of pets to respondents was it meant they had to be active, it helped having the presence of pets being with them, feeling known by pets and having a reciprocal, mutual relationship.

However, Dr Young warned that not all pet owners would fit the profile, “giving an animal to someone hoping it will make them feel needed is risky for both humans and animals”.