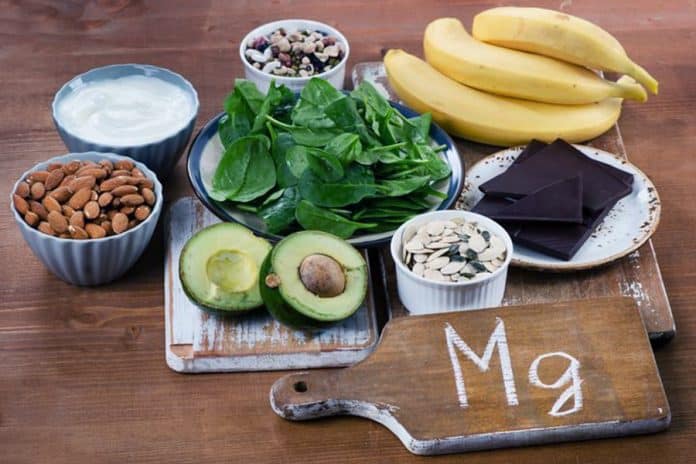 If you’re a health-conscious individual, then you’ve probably already heard that taking a little bit of extra magnesium might support your health in a myriad of ways. Maybe you have a friend who takes magnesium for her headaches or a family member who’s an Epsom salt bath enthusiast, or a co-worker who swears by that powdered magnesium she drinks for recovering from post-workout aches. Whatever the reason, magnesium is one of the most popular supplements in the wellness world.

Why We Need Magnesium

Why the popularity you ask? There are a ton of different minerals out there, but few are as involved in our everyday health and wellness as much as magnesium. For starters, and according to the National Institutes of Health (NIH), magnesium plays a key role in more than 300 diverse biochemical reactions in the body. These reactions range from those involved in energy production and protein synthesis to blood sugar control and blood pressure regulation. In other words: Magnesium is pretty important to our health.

And this brings me to some good news and bad news. The bad news is that it’s hypothesised that 50 to 90 percent of us are deficient in this mineral due to factors like medication use, soil depletion, and major pitfalls of the standard Western diet (for example: processed foods are virtually devoid of this important mineral).

Magnesium supplements are generally safe and available in many forms—including as traditional supplement capsules, Epsom salts, magnesium oil, magnesium cream, and drinkable powder—that make it easy to incorporate it into your everyday routine. In addition, magnesium is present in some delicious foods like dark leafy green vegetables, legumes and nuts, wheat and other grains, and fish.

Magnesium comes in many different forms—and some are more efficient than others.

Of all these forms, our experts agree magnesium glycinate is a stand out for a few reasons. Here’s what you need to know about it:

It Can Help You Sleep

Many individuals use magnesium as a sleep aid, and while the mechanism of action isn’t entirely clear, its ability to induce muscle relaxation and ease stress are two of the ways it’s thought to help improve sleep. In a study on the elderly, magnesium glycinate supplementation subjectively improved insomnia.

It Can Enhance Memory

Maintaining a normal blood sugar level is no easy task, but magnesium might be a useful tool in doing so. Research has shown that dietary magnesium intake (aka, eating foods high in magnesium) reduces the risk of developing type 2 diabetes. This is because magnesium helps break down sugar, which in turn decreases insulin resistance.

It Is Good For Your Bones

It Provides Nutritional Support To Those Who Have Migraines And Headaches

Low levels of magnesium in the blood (aka, a magnesium deficiency) has been linked to migraine headaches. In addition, supplementing with magnesium has been shown to benefit individuals who have migraines.

It Can Help Manage PMS Symptoms

It’s true! Studies, like one double-blinded placebo-controlled trial, have shown that taking magnesium glycinate (at a dose of 250 mg per day) helps manage PMS symptoms. You might be surprised by the connection between magnesium and hormones, but according to Jolene Brighten, N.D., a naturopathic doctor and female hormone expert, “Magnesium has been shown to be effective in positively helping lower prostaglandins and easing menstrual cramps. Magnesium is also necessary for oestrogen detoxification, which is why it can help ease PMS.”

It Can Benefit Leg Cramps

Studies have shown that magnesium glycinate can benefit pregnancy-induced leg cramps. In one study, 80 pregnant women participated in a double‐blinded, randomised, placebo‐controlled trial by taking 300 mg of magnesium glycinate daily. The frequency of cramping, as well as the intensity of leg cramping, were reduced by 50 percent compared to the placebo group.

How Much Magnesium Glycinate Should You Take?

• 350 mg per day is recommended in adults aged 19 and over for both men, women, and pregnant and lactating women.

The most common side effects of magnesium supplements are diarrhoea, cramping, and digestive upset. This is more common in certain forms of magnesium—like magnesium oxide and magnesium citrate.

Magnesium glycinate is a form of magnesium that has the fewest side effects and doesn’t cause digestive upset when taken in a higher dose. It’s thought to be a good choice for individuals with gastrointestinal issues over other magnesium supplements.

Magnesium citrate is one of the other most commonly recommended sources of magnesium. Magnesium citrate has a laxative effect, but in many cases that’s actually a benefit since it’s used specifically to treat constipation due to its ability to increase gut motility. Of all the forms of magnesium, magnesium glycinate is least likely to cause diarrhoea, and experts also turn to it for the treatment of a magnesium deficiency due to its high absorbency rate. According to Dr. Brighten, “Magnesium glycinate is highly absorbable, doesn’t cause diarrheoa like the citrate form can, and has a calming effect.”

Magnesium citrate and magnesium glycinate are more bioavailable than other common forms of magnesium like magnesium oxide. They are both great options for magnesium supplementation, depending on your specific needs, whether they be correcting a deficiency and helping with sleep and relaxation (in which case go with the glycinate form), or increasing gut motility and supporting digestion (for these go with the citrate form).

Is There Anyone Who Should Not Take Magnesium Supplements?

Hypermagnesemia is the name for a magnesium overdose, which is rare but more common in individuals with kidney disease because the kidneys are responsible for excreting excess magnesium and work to regulate magnesium balance in the body.

Overdosing on magnesium can cause serious side effects, including an irregular heartbeat, low blood pressure, confusion, slowed breathing, coma, and even a few deaths have been reported. Keep in mind that an overdose of this measure would require a person to take thousands of milligrams of magnesium daily, which is well beyond the dose in a typical magnesium supplement.

Although it would be difficult to overdose on magnesium-rich foods or magnesium supplements, magnesium is also the primary ingredient in some prescription and over-the-counter laxatives, and severe hypermagnesemia has been reported to occur from taking laxatives that contain magnesium for constipation over a long-term period.

Fatal hypermagnesemia can occur in those with renal problems when taking these laxatives because kidneys that are not fully functional are not able to effectively clear magnesium from the body. As a general rule, you should always talk to your doctor before taking a new supplement.

Magnesium can also interact with certain medications, for example, with certain types of antibiotics. It is usually recommended to take antibiotics at least 2 hours before or 4 to 6 hours after magnesium-containing supplements.

Another group of drugs that magnesium tends to interact with is bisphosphonates that are often used to treat osteoporosis. Magnesium can interfere with how well this drug is absorbed, so the supplement should be taken at least two hours before or after these medications.”

Bottom line: Magnesium glycinate is one of the most absorbable forms of magnesium. For this reason, it is a great option if you are looking to reap the benefits of magnesium supplementation, like sleep support, enhanced memory, and PMS relief.

If you are pregnant, breastfeeding, or taking medications, consult with your doctor before starting a supplement routine. It is always optimal to consult with a health care provider when considering what supplements are right for you.