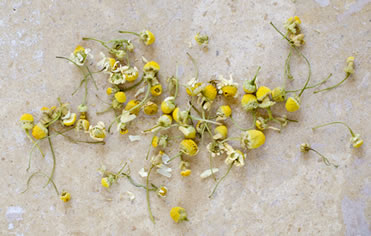 The patients were tested for bleeding gums at the beginning of the study, after seven days and after 15 days. The researchers found that all three extracts acted similarly and reduced gum bleeding significantly.

The chamomile and pomegranate had antimicrobial effects, as they reduced pathogenic oral bacteria significantly. These included Streptococcus mitis and Streptococcus sangus, which are known to accumulate as biofilm and excrete toxins that produce inflammation, pain and bleeding. These same toxins can also leak into the blood stream where they can damage blood vessel walls, tissues and organs.

Chamomile (Matricaria recutita Linn.) contains several flavonoids and terpenoids, which have been shown to be antimicrobial as well as reduce inflammation and spasms.

Pomegranate (Punica granatum Linn.), is antimicrobial but it is also antioxidant and stimulates the immune system. These are typically attributed to its alkaloid content – including tannins. Pomegranate skin contains the most medicinal properties.

Chlorhexidine is a popular antimicrobial gingivitis treatment that can reduce pathogenic oral bacteria, but comes with negative effects, including staining of the tongue and dental work, increased teeth sensitivity and oral scaling.

Chlorhexidine has been linked with allergies. It’s lingering bad taste can also ruin the taste of the next meal or two.
One of the problems with the antimicrobial nature of chlorhexidine is that it also wipes out the beneficial (probiotic) bacteria of the oral cavity. This allows the pathogenic bacteria to regrow without any challengers.

Tests with pomegranate and chamomile have not established whether they also cause probiotic die-off. But other research has shown that plant-based fibres support the regrowth of probiotic colonies.