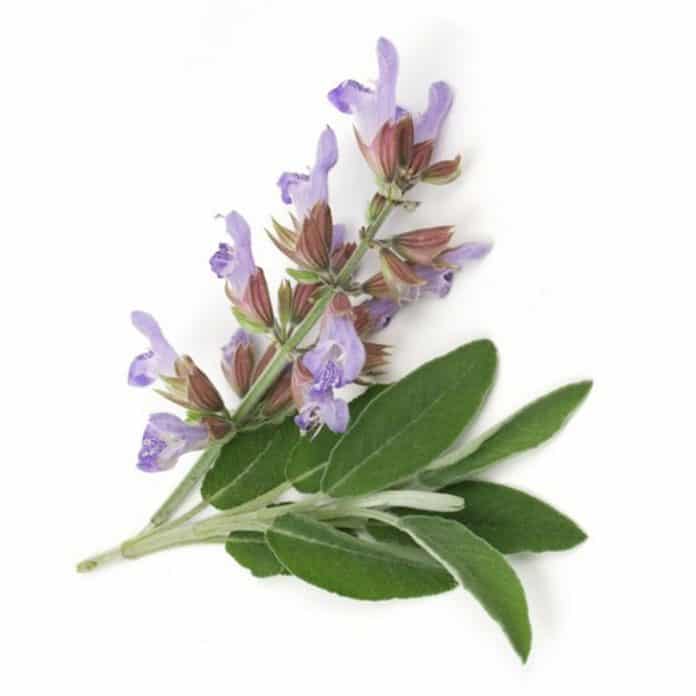 Sage belongs to the Salvia plant family – derived from the Latin word salvere which means, “to heal.” To heal, indeed. Sage (Salvia officinalis and Salvia lavandulaefolia) is a delicious cooking and culinary herb but it has also been used for thousands of years for a variety of ailments.

This beautiful plant with its blue flowers grows wild in many continents. This includes North America but it is also native to the Southern Europe and the Mediterranean region.

For thousands of years, sage has been used in Greek and European medicine to treat a myriad of conditions. These range from intestinal problems to lung and airway conditions, heart disease and circulation problems. It has been used to treat inflammatory issues and low immune function. Sage has also been used to treat oral, sinus and lung infections and sage essential oil is beneficial for tonsillitis.

Traditional uses for sage have also uncovered another benefit: The ability to boost moods and increase memory and cognitive skills. This benefit isn’t just after weeks or months of dosing: It also occurs within hours of consuming the sage.

This last benefit of sage has been the subject of intense research over the past decade. With proven results.

• It blocks and repairs damage to brain cells related to the formation of amyloid-beta plaque.

• It is a potent inhibitor of cholinesterase.

Studies on single and long-term dosing

“The results showed that administration of sage resulted in a consistent improvement for both the 25- and 50-microl dose on the ‘Speed of Memory’ factor. There was also an improvement on the ‘Secondary Memory’ factor for the 25-microl dose. Mood was consistently enhanced, with increases in self-rated ‘alertness’, ‘calmness’ and ‘contentedness’ following the 50-microl dose and elevated ‘calmness’ following 25 microliters. These results represent further evidence that Salvia is capable of acute modulation of mood and cognition in healthy young adults. The data also suggest that previous reports of memory enhancement by Salvia may be due to more efficient retrieval of target material.”

Another clinical study tested 42 men and women with mild cognitive impairment. They were given 60 drops of a sage extract or a placebo for four months. After the four months, the patients scored significantly higher on cognitive testing (ADAS-cog tests). The researchers also found that daily sage supplementation improved mood and reduced agitation among the patients. The researchers concluded:

“The results of this study indicate the efficacy of S. officinalis extract in the management of mild to moderate Alzheimer’s disease. Moreover, S. officinalis may well reduce agitation of patients but this needs to be confirmed.”

Getting the dose right

Researchers from Australia’s Swinburne University in Melbourne tested 20 adults who were over 65 years old. With periods in between, they were given different doses of the sage extract and tested for memory efficiency and cognitive function. The researchers found that those who received 333 milligrams of the sage extract benefited the most. Doses that were higher or lower also showed benefit, but not as much as with 333 milligrams per day. The researchers reported:

“Compared with placebo (which exhibited the characteristic performance decline over the day), the 333-mg dose was associated with significant enhancement of secondary memory performance at all testing times. The same measure benefited to a lesser extent from other doses. There also were significant improvements to accuracy of attention following the 333-mg dose.”

The University of Northumbria researchers also tested 30 healthy young adults. They gave them two different doses of dried sage leaf (300 milligrams or 600 milligrams) or a placebo. They were given mood assessment testing and cognitive tasking before and after one and four hours after a dose on three separate occasions.

“The results confirm previous observations of the cholinesterase inhibiting properties of S. officinalis, and improved mood and cognitive performance following the administration of single doses to healthy young participants.”

Researchers also tested 135 healthy adults who were given sage aromatherapy or no aromatherapy and then tested for cognition and memory. They also compared the effects of Salvia lavandulaefolia and Salvia officinalis. The study found both sage species resulted in improvement. However, the S. officinalis aromatherapy was better at boosting cognitive testing scores among the volunteers. The researchers reported:

“Data analysis revealed that the S. officinalis aroma group performed significantly better than the control group on the quality of memory and secondary memory primary outcome factors from the test battery.”

The memory-boosting effects of the sage are specifically noted here, but we also found that some of sage’s cognitive tasking and brain protective effects were not as well conveyed from aromatherapy compared to ingesting the leaf or extracts. Nonetheless, the researchers concluded:

“These findings suggest that the aromas of essential oils of Salvia species reproduce some but not all of the effects found following oral herb administration, and that interesting dissociations occur between subjective and objective responses.”

There are a number of medicinal compounds found in sage. Those more relevant to protecting brain health include:

• Flavonoids such as quercetin, kaempferol, luteolin, apigenin and hispidulin,

• Polysaccharides such as pectin and arabinogalactans

These are all medicinal compounds. One compound to keep in mind is thujone. This can have bothersome effects in too high a dose, as it can inhibit the GABA-A receptor. The Committee on Herbal Medicinal Products/European Medicines Agency (HMPC/EMA) has recommended a safe maximum limit of 6 milligrams of thujone per day. Different sage varieties can have different thujone levels, but for the most part, thujone is a fractional component.

The research cited above proves that sage not only boosts moods, memory and cognitive function over the long-term. It will also boost memory and cognition within hours of taking it. In other words, for a tough multi-tasking event or day ahead, sage is a good call. Both species of sage will work nicely. But Salvia officinalis will likely do a little better than Salvia lavandulaefolia.