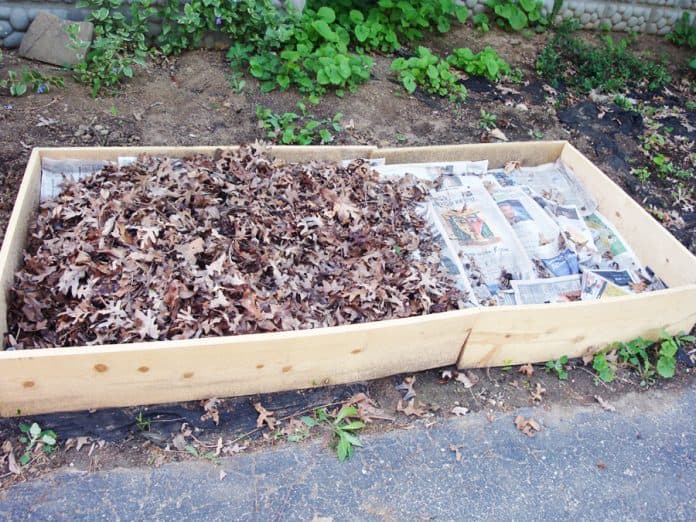 Food self-sufficiency is a hot topic in the U.S. and beyond. As our industrial agricultural system begins to crumble, poisonous conventional farming methods are brought to light and the crisis of our depleted topsoil looms ominously. In response to these threats, homesteading and community gardens are on the rise across the nation as people take control of both the quality and cost of their food. It’s a modern spin on the classic Victory Gardens of the past.

And yet, for anyone who has tilled, weeded and prepared their little patch of vegetable paradise, one aspect quickly becomes clear: growing your own food is work. Of the back-breaking kind. Truth be told, there’s quite a bit of maintenance involved once your green darlings begin to grow — insect and weed control, fertilising to encourage healthy plants. I’ve also found that, unless you begin your plants from seed, growing your own food can be an expensive venture.

But what if we had a system in place that mimicked nature to such a degree that irrigation, fertiliser, farming equipment and hard labour were rendered obsolete? Where we could enjoy the most nutrient dense, succulent and flavourful produce for pennies on the dollar with minimal effort? This vision isn’t a pipe dream — it’s here now and simple to learn.

All about the soil

In the documentary, Back to Eden, Paul is an arborist with a passion for creating lush, productive gardens from practically nothing. Through close observation of how nature continues season after season, without any watering, fertilising or interference from man, he discovered a perfect growing system is right before our eyes — and very easy to implement.

The system he developed is a simplified version of traditional permaculture, utilising many of the same ideas, but without as much planning involved.

A major aspect is the use of wood chips from tree limbs, which include the leaves — like what a professional tree service would create when trimming trees and chipping the ‘waste.’

Essentially, Paul is building up the soil through composted material — including the wood chips which eventually breakdown overtime.

The soil is also naturally aerated, which supports the microbe community in the soil, helping it to thrive and compost matter — a perfect recipe for rich humus that’s exceptionally supportive of robust plant life.

In over 35 years of applying this method, Paul has never watered his fruit trees. Additionally in the vegetable garden, only freshly planted seeds are watered in order to trigger germination. After that point, they’re on their own.

He also doesn’t have a problem with insects or disease because the plants and trees are so healthy. What few weeds do sprout are easily removed because the soil isn’t compacted.

Paul is unquestionably on a mission to share his discovery and help others become food self-sufficient. In the face of genetically modified organisms, which were made necessary because of our depleted soil from industrial farming techniques, and an exploding population around the world, a simple and economical method such as Paul’s may seem too good to be true. Don’t be fooled. For all its simplicity, it’s effective — and can be used for sizable growing operations as well. We just need a bit of knowledge.

Mulch — the secret to growth, nutrition and pest resistance

How does Paul’s method work? First you need to locate a good supply of wood chips from a local tree trimming company. Often they will give you the chips for free.

Chicken droppings are an option as well since the animals naturally turn and aerate through scratching, which creates a nicely composted soil. Also, a good supply of newspapers will help with initial weed control.

To prepare the growing area:

1. Remove any thistles or dandelion weeds.

2. Lay down 3-4 layers of newspaper to kill off any undesirable seeds.

3. Top newsprint with 4-6 inches of composted soil, then 3-4 inches of wood chips.

4. Dust the woods chips with a final layer of compost (no more than an inch).

Another growing material that makes easy work of gardening is Biochar — a natural product which is created by slowly burning wood chips, corn stalks or coconut shells in a low-oxygen environment. The carbon in the organic matter is trapped inside the charcoal instead of being released into the atmosphere, making the process eco-friendly.