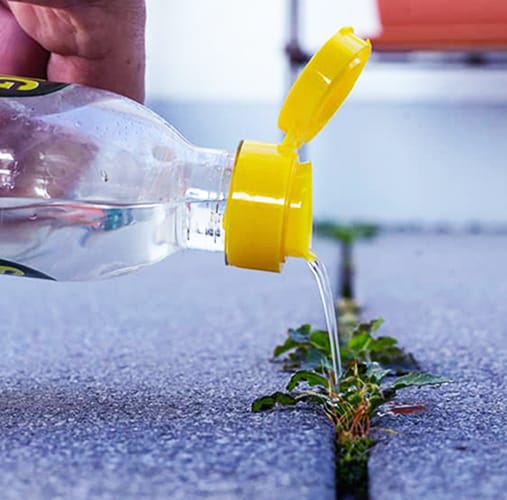 Beautiful blooms and picturesque landscapes don’t come without hard work. And for the most part, those who garden all have one obstacle to overcome: weeds.

Most garden weeds start by seed, according to Tasha Greer, an Epicurean homesteader and author of Weed-Free Gardening: A Comprehensive and Organic Approach to Weed Management. “However, some also spread from one area to another by runners on top of soil or rhizomes under the soil,” says Greer. While some weeds may be dormant or die back in Winter, they can regrow in Spring or Summer.

In other words, weeds are everywhere, waiting to happen! And beyond being an eyesore to some, certain weeds can affect the overall health of your garden over time (though others are totally harmless and even beneficial).

“Some weeds can influence long-term soil health by encouraging populations of certain bacteria or fungi to increase,” notes Greer. “Those fungi and bacteria can then alter the soil pH and nutrient availability, endangering even well-established perennials like shrubs and trees.”

Fret not, though. There are ways to combat weeds at home if you’d rather keep your garden looking clean and clear (though the wild look can be lovely too). While the first instinct for those who don’t want to buy harsh conventional treatments may be to turn to apple cider vinegar, that’s far from your only option.

DIY Recipes To Try At Home

Here, gardening experts share their top homemade recipes for DIY weed killers that are easy to make and safe for the environment:

METHOD:
Using a large spray bottle, combine all the ingredients and shake well. Let the bottle sit for a couple of minutes to let the ingredients settle together. Spray the weeds generously, covering the entire plant and the soil to attack the roots. Leave the weed killer undisturbed until the next day. Then, pull the dead weed out!

This recipe is effective for a few reasons, says gardening expert Erinn Witz . “The vinegar contains acetic acid, which is caustic to plant cells. The Epsom salt dehydrates the plant by blocking it from absorbing moisture. And the dish soap acts as a surfactant that allows the vinegar and salt to better penetrate the plant tissue.”

Heat a pot of water to boiling, then being very careful and wearing oven mitts, immediately carry it outside and pour it directly on the weed, soaking as much of the soil as possible. Leave the plant undisturbed until the following day, then remove the weeds.

“Boiling water works through simple heat damage,” explains Witz. “The hot water essentially ‘cooks’ the plant cells, resulting in death. This is another indeterminate plant killer, so be careful around plants you want to keep.”

In a spray bottle, combine the water and the rubbing alcohol. Shake to combine. Spray generously, aiming directly for the plant leaves and soil. Leave the plant undisturbed until the next day then remove the weeds.

“The alcohol dries out the plant tissues, leading to fatal dehydration,” says Witz. “The effects of rubbing alcohol are best on a warm, sunny day, when the sunlight can add its own drying effect.”

Mix the vodka and dishwashing liquid together in a spray bottle and shake well. Spray directly onto the weed leaves, and leave the weed alone for the rest of the day then remove the dead weeds.

The vodka acts as a drying agent, depriving the plant of the moisture it needs to live. When the plant cells get too dehydrated they die. This is especially effective for broadleaf weeds, and it won’t harm grass as much as some other weed killers will.”

Make sure the weeds you want to target are moist. Spray them down a bit with a hose if needed. Sprinkle the baking soda directly onto the weeds. Use a broom to really work the baking soda over the weed and into the soil if needed. You may need to repeat the application in a couple of weeks if the weeds persist in hanging around.

The baking soda works by sucking moisture from the plant tissues, drying the plant up to the point where it can no longer photosynthesise its food. This treatment works best on driveways and sidewalks or other hard surfaces where weeds like to pop through the smallest of cracks.

Rodger St. Hilaire, founder and editor of Gardening Boost, suggests this recipe because “the cornmeal gluten meal will prevent weed seeds from germinating.” He notes that it’s important to “make sure to purchase cornmeal gluten meal that is specifically labeLled for use on lawns and gardens. Some products are not meant for this purpose and can actually harm your plants.”

Combine Borax powder with a small amount of water – just enough to make a sticky paste. About ½ a cup of Borax should be enough, but you can double or triple the recipe if applying it to a large number of weeds. While Borax is a naturally occurring mineral, you’ll want to be cautious not to get it on your skin or eyes. Wear gloves when mixing.

Once you’ve found the right consistency, take a pair of pruning shears and cut the weeds you wish to target down to the ground, only leaving a small stump.

Now, take your borax paste and apply a generous amount of it to the freshly cut stem.

This is called a cut-and-paste method and is best applied to large semi-woody weeds like thistles. Borax has a high pH value, and it is alkaline enough to kill weeds (as well as other plants, so be careful where you put it).

PREVENTING WEEDS IN THE FUTURE
Once you’ve weeded out the nuisance, you’ll want to take precautions to prevent more weeds from forming. Retired landscaper and lawn care expert Larry Yeates shares his tips below: