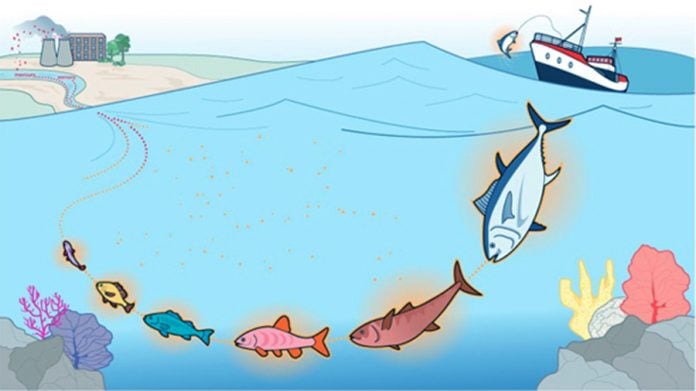 Mercury, a naturally occurring element, has a reputation for being deadly, especially to the brain. The heavy metal is one of only two elements on the periodic table that’s liquid at room temperature. In its liquid form, mercury shimmers with an iridescent light mesmerising enough to be displayed in the world’s most beautiful art museums. But the element is deceptive and is a potent neurotoxin.

Methylmercury, one of the most toxic forms of mercury, as well as the most common form to which humans are exposed, is a by-product of bacteria consuming mercury in sediments. Methylmercury, a potent neurotoxin, enters the food chain where it bio-accumulates in sea life, becoming more toxic as it moves up the food system.

Mercury contamination in the environment has proven problematic throughout the world, but in Australia, scientists have reported some of the worst levels seen on Earth, according to the featured Australian Broadcast Corporation (ABC) program, “Catalyst” A recent episode of the program explored the human health effects of mercury contamination in the environment, particularly in the Derwent River in Tasmania — home to some of the nation’s “hotspots.”

Scientists have detected levels of mercury up to 10 times higher in hotspots in the Derwent River than in other highly contaminated systems. This is largely a result of toxic industry operations along the river in the estuary. Similar to lead and other heavy metal pollutants, mercury can spread great distances once it has been released into the environment, which is why mercury spills start off as a local catastrophe but quickly become a global issue.

Of the 2,000 metric tons of manmade mercury produced each year, researchers estimate a significant portion of the metal ends up in the atmosphere, where it’s transported around the world. An estimated 100 tons of mercury are transported to the Arctic, the film notes. This may explain why scientists have observed an increase in mercury levels in Arctic animals over the past 150 years, more than 92 percent of which is man-made.

The bioaccumulation of methylmercury in seafood is the most common route of exposure in humans. Food Standards Australia New Zealand says it’s generally safe to consume most types of fish two to three times per week. Fish that contain higher mercury levels, such as shark and swordfish, should be eaten no more than once per week.

Pregnant women, women planning a pregnancy, and children under the age of 6, may consume two to three servings per week of any fish and seafood that doesn’t include orange roughy, catfish, shark, swordfish and marlin, the agency says. If pregnant women and young children do consume fish or seafood higher in mercury, they should do so only once every two weeks.

Depending on their size and lifespan, different fish have different methylmercury levels. While monitoring the river for heavy metals, scientists tested several varieties of fish and fish products for methylmercury. They also tested the hair of a fisherman who eats fish frequently.

In humans, mercury contamination from seafood consumption is typically evaluated by measuring hair mercury concentration, while exposure to mercury from other sources (elemental and inorganic mercury) is typically measured by analysing blood or urine. Some of the test results may surprise you:

The test showed the Australian salmon contained 0.3 mg of mercury per kg, a lower concentration of methylmercury than expected; while the fish fingers contained 0.069 mg of mercury per kg of fish. Fish with longer lifespans, such as the ocean perch, neared levels that are probably best avoided. Surprisingly, canned tuna and fish fingers had some of the lowest mercury levels in comparison.

As for the fisherman, the results showed his hair samples contained 1.7 microgram (mcg) of mercury per gram of hair (equivalent to 1.7 mg/kg), which scientists in the film say is relatively low. People who consume significant amounts of fish often have up to 20 mg of mercury per kg of bodyweight, according to researchers. The takeaway here is that moderation is key but, nonetheless, mercury exposure in humans remains a dangerous problem.

For example, the impacts of mercury contamination that occurred decades ago in Japan’s Minamata Bay are still evident today, with many residents still suffering the agonising effects of mercury poisoning. Those most affected include poor fisherman and their families, many of whom suffered and continue to suffer from what the locals call “Minamata disease.”

In the mid 1900s, the toxin was released into the water by the Chisso Corporation factory, “which used mercury in the manufacture of acetaldehyde, a substance used to make plastics,” according to The New York Times.

Not only did the factory deny dumping mercury into the water, but also it secretly changed location and continued polluting the environment, resulting in a widespread and lasting catastrophe. One of the victims includes Kazumitsu Hannaga, who was born severely deformed after being poisoned in the womb when his mother ate fish contaminated with mercury. The New York Times reports:

“Abandoned by his mother when he was a young child, and with his father paralysed from the waist down by mercury poisoning, Mr. Hannaga has spent most of his 42 years in a hospital, his head usually tilted awkwardly to one side and his twisted legs curled up under a wheelchair.”

There’s no denying that mercury pollution is a problem. Fortunately, there may be ways to clean it up. Scientists from Flinders University in Adelaide, South Australia, say they have discovered an effective solution for cleaning up mercury contamination in the environment.

The researchers sought to create a new type of plastic made from sustainable materials. They set their focus on sulphur, an abundant waste product that’s so inexpensive people will pay you to take it away. They began by melting sulphur down to a polymer, but quickly found the substance unusable, as the material grew brittle and fell apart after cooling.

So, they went back to the drawing board and learned how to make polymeric sulphur, but in a way where it could remain as a polymer. To meet this challenge, the researchers considered different molecules that would react as sulphur and hold it in a polymeric state.

One particular substance that captured their attention was limonene — a plant-derived substance and the main component in orange oil. At this point in their research, mercury was not a consideration. However, it occurred to them that since the plastic product had high sulphur content, theoretically, it should bind to certain types of metals.

Coincidentally, sulphur has a very high affinity for mercury. So, the next logical experiment was to observe how the sulphur limonene polysulfide interacted with mercury. In an effort to characterise the properties of their new polymer, scientists took a sample and added mercury chloride, a type of inorganic mercury that is soluble in water.

They applied it to the surface and after 30 minutes observed their polymer had absorbed the mercury in the water, removing up to 50 percent of the potent neurotoxin. It was a “striking result,” the researchers said. Next, they tested it on soil and observed similar effects. The polymer absorbed a significant portion of mercury from the soil too.

The scientists predict their polymer will also bind to methylmercury, but this hasn’t yet been confirmed. “We have a polysulfide that can remove mercury from water and as you work to remove metals from the Derwent estuary, we’re hoping that this technology can be adapted to improve the environment,” said Justin Chalker, lecturer in synthetic chemicals at Flinders University.

How to Protect Yourself Against Mercury Poisoning

The World Health Organization (WHO) considers mercury one of the top 10 chemicals of major concern to public health. The heavy metal “may have toxic effects on the nervous, digestive and immune systems, and on lungs, kidneys, skin and eyes.” Symptoms associated with mercury exposure include “tremors, insomnia, memory loss, neuromuscular effects, headaches and cognitive and motor dysfunction,” according to the WHO.

Even low-level mercury exposure can have devastating effects, particularly for developing children, which is why it’s important to protect yourself against this dangerous neurotoxin. The best way to avoid mercury is to be choosy about the type and the amount of fish you eat. The challenge is to select fish that qualify as low or very low in mercury.

The joint recommendation by the U.S Food and Drug Administration (FDA) and the Environmental Protection Agency regarding fish consumption for pregnant women, those who may become pregnant, breastfeeding mothers and young children is 8 to 12 ounces of fish per week from choices that are lower in mercury.

So where can you find information about the mercury content of any given fish species? Here are three resources: