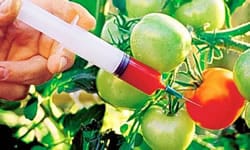 Russian Prime Minister Dmitry Medvedev has announced that Russia will not import any more GMO food products or seeds. The Russian government has taken a bold stand against genetically altered food ingredients, believing there is no need for them in their country. Medvedev also declared that Russia has “enough space and opportunities to produce organic food,” and they will no longer be encouraging the production of GMOs.

He commented, “If the Americans like to eat GMO products, let them eat it then. We don’t need to do that.”

Russian Minister of Agriculture Nikolai Fydorov agrees, saying that Russia should remain free of genetically modified products to prevent its citizens from being poisoned.

The importation ban, issued with the consent of the Russian parliament, was initiated in late February. As the orders trickle down, a widespread monitoring effort will be placed over the Russian agricultural sector. Imports will be heavily inspected to assure that GMOs aren’t entering the country. This new all-out ban strengthens very restrictive policies already put in place. Current Russian law requires producers to label any product containing GMOs in excess of 0.9 percent of the product.

Awareness of GMOs in the food supply is growing. In late 2013, Russia created a Unified State Register that documents various genetically modified plants. The realisation that they are untested for their effects on human health and the environment is making many concerned around the globe.

Furthermore, labeling GMOs is always a shadowy issue; the biotech industry likes to keep people in the dark, so as not to raise suspicion. Scientific studies like the Seralini study may show the dangers that GMOs pose to animals (inciting tumours) but these studies are often swept under the rug and discredited by the biotech industry and propagandists.

However, Russia’s State Duma’s Agriculture Committee has suggested that GMOs remain banned until scientists establish a working system of control to establish the effects of GMOs on human health and the environment. With no standards of safety to go by, GMOs are pushed into agriculture as experimental science. Breeding, growing and cross-pollinating these genetic alterations into the natural world changes animals, plants, and microorganisms in startling ways. There are no controls to observe the long-term effects. Russia, though, is putting their foot down as a nation, prohibiting GMOs until safety controls are established and proven.

Irina Ermakova, the Vice President of Russia’s National Association for Genetic Safety, stated that it’s necessary to ban GMOs, taking the advice of prominent Russian scientists who declared that a moratorium should be imposed on GMOs for at least ten years.

Ermakova stated, “While GMOs will be prohibited, we can plan experiments, tests, or maybe even new methods of research could be developed. It has been proven that not only in Russia, but also in many other countries in the world, GMOs are dangerous. Methods of obtaining the GMOs are not perfect, therefore, at this stage, all GMOs are dangerous. Consumption and use of GMOs can lead to tumours, cancers and obesity among animals. Bio-technologies certainly should be developed, but GMOs should be stopped. We should stop it from spreading.”