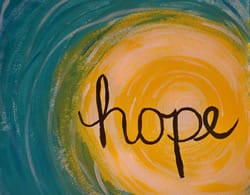 We all know that hope is a good thing, even an essential thing: there is no life without hope, or so the saying goes. Psychologists believe hope might be the most important feeling, state, or emotion we can experience. Their studies show that hope is key to good health, the best predictor of a meaningful existence, and an indicator of academic and athletic performance. Yet we tend to think of hope as something you either have or you don’t, something you’re born with, or born into, through perfect parenting or perfect circumstances.

But research spearheaded by Anthony Scioli, a professor of psychology at Keene State College in New Hampshire and author of The Power of Hope, shows that hope is a skill you can acquire. It is active—you can cultivate and nourish it. It is multifaceted—there are 14 distinct aspects, according to Scioli. It is self-perpetuating—hopeful people tend to be more resilient, more trusting, more open, and more motivated than those less hopeful, so they are likely to receive more from the world, which in turn makes them more hopeful—which is why it’s so important.

Toward a Psychology of Hope

While theorists, psychiatrists, and physicians have touted hope as a primary agent of healing for more than four decades, it did not emerge as a popular subject of psychological inquiry until the 1990s, when C. S. Snyder published The Psychology of Hope: You Can Get There from Here. Snyder, a pioneering researcher in the field who died in 2006, defined hope as a “motivational construct” that allows one to believe in positive outcomes, conceive of goals, develop strategies, and muster the motivation to implement them.

In his last presentation to the American Psychological Association in 2005, Snyder laid out the results of studies conducted over a decade using the “Hope Scale,” a measuring tool and test he created. “Low hope” individuals, he found, have ambiguous goals and work toward them one at a time, whereas “high hope” individuals often pursue five or six clear goals simultaneously. Hopeful people had preferred routes to achievement and alternate pathways in case of obstacles. Low scorers didn’t.

Other prominent researchers also have argued that hope is essential to aging well and performing well. Their work shows that hopeful people have more self-esteem, take better physical care of themselves, and can better tolerate pain. Hopeful people provide “social benefit,” because they use a “me–we” way of thinking and help others succeed. Outlining the results of one study in which depressed elderly people were taught to think hopefully, Snyder said, “As they became more hopeful, they became more grateful . . . and more likely to experience joy.” They learned to accentuate the positive and to laugh at themselves and others. “If you haven’t learned how to laugh at yourself,” he concluded, “you’ve missed the biggest joke of all!”

With additional research and his own Comprehensive Hope Scale, which took six years to develop, Scioli expanded the conventional psychological approach to hope.

His theory captures the complexity of hope with its roots in the “deeper” self, its foundation in relationships, and its spiritual core. The kind of hope Scioli is concerned with is not about small wishes but big dreams. Hope sustains our intimate bonds, gives life purpose and meaning, and determines our prospects for survival and health.

Hope, Scioli theorises, has a strong spiritual (and transpersonal) dimension. It is associated with virtues such as patience, gratitude, charity, and faith. “Faith is the building block of hope,” he says. Above all, it is based on relationships, on a collaborative connection with people as well as a higher power, as distinct from optimism, which is connected to self-confidence. Hope also differs from the denial of reality, which is really false hope, an avoidance of truth that narrows one’s field of focus.

Our Most Powerful Predictor of Well-Being

Scioli studied the relative importance of hope, age, and gratitude as predictors of well-being. Based on his sample of 75 people between 18 and 65, using three different scales, he consistently found that a high level of hope was the most powerful predictor of well-being — a finding that surprised even him.

Hope also appears to buffer anxiety about death and dying. In another study, using his Comprehensive Hope Scale, Scioli showed a group of young adults a 10-minute clip from the movie Philadelphia, in which Tom Hanks plays a man dying of AIDS.

Scioli then gave them a questionnaire to measure their fear of dying and death. The results showed that anxiety about death did not spike in people who scored high in hope but did spike in low scorers.

Scioli believes that hope ultimately reflects the depth of the mind–body connection. For example, he conducted a study of 12 thyroid cancer patients and found that the hopeful ones reported better health and less distress and worry about their health.

Because the sample was small, Scioli added HIV-positive people to the study and got the same results: HIV-positive patients with high hope reported better health and less worry than those with low hope. Interestingly, they also exhibited less denial about their condition.

He corroborated their claims by examining their immune cell count, as well as interviewing each individual’s case manager, as a check against the chicken-and-egg question (did the patients feel more hopeful because they were physically healthier or were they in better health because they had hope?). His findings strongly suggest that hope affects our immune systems and general health.

The Key to a Healthy Internal Environment

“Hope represents an adaptive ‘middle ground’ between the over-activated ‘stress response’ and the disengaged ‘giving-up complex,’” Scioli writes in The Power of Hope. “At the physiological level, hopefulness can help to impart a balance of sympathetic and parasympathetic activity while assuring appropriate levels of neurotransmitters, hormones, lymphocytes, and other critical health-related substances. Equally important, a hopeful attitude may permit an individual to sustain this healthy ‘internal environment’ in the presence of enormous adversity.”

Common sense tells us, and research shows, that harbouring an open and “eternal” perspective lessens the impact of both minor stresses and major existential challenges. It brings light into times of darkness and uncertainty. If you are hopeful, you will be supported from within by your beliefs and values, and from without by a caring network of loved ones. Both systems of support protect you in misfortune, including serious illness. But Scioli’s expansive view of this valuable resource and complex emotion reminds us that we can’t rely on hope alone in challenging times. Rather, we need to have a belief system that gives us “a hope for every season.”