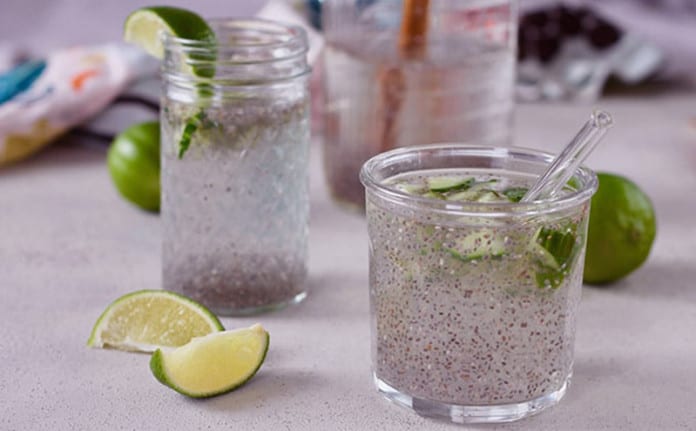 Hydration is involved in so many aspects of wellbeing, from immune function, to mood, to skin ageing, and eye health. It’s the backbone of healthy living, says Dana Cohen M.D. and integrative medicine physician: “Before you start any diet or any nutrition plan, you need to learn how to hydrate first,” she says.

All that is to say: Reaching your daily water quota is essential (and for what it’s worth, that magic number differs for everyone).

But trying to drink more water – whatever “more” looks like for you – can be a bit of an uphill battle. Ever chug glass after glass of water and still feel parched? That’s because, says Cohen, drinking gallons of water isn’t necessarily the only to-do for dehydration (really!).

Following are four other ways you can quench your thirst and stay hydrated all day long:

OK, technically, this tip requires chugging some water. But rather than keeping a bottle within arm’s reach all day, Cohen suggests ‘front-loading’ your water in the morning, as soon as you wake up. It’s the same rationale as eating most of your calories earlier in the day, lightening the load as you head toward bed (in case you’re curious, research shows that those who ate a big breakfast experienced fewer hunger pangs throughout the day).

“I fill [a water bottle] the night before, throw in some lemon, some sea salt, and drink down 8 to 16 ounces first thing in the morning,” Cohen explains. “Sort of soak yourself – that’s a really easy thing to do, and you’ll notice a difference.”

2. Have A Green Smoothie For Breakfast

“A green smoothie a day is probably the most incredible thing you can do to hydrate yourself,” Cohen remarks. That’s because all those greens (spinach, kale, what have you) contain significant amounts ofre, which helps you hold on to water much better. “The fibre is what really acts as a sponge,” Cohen notes.

More hard data is needed, she adds, but her anecdotal evidence speaks volumes: In Cohen’s practice, patients who incorporate a green smoothie into their daily regimen feel way more hydrated. “[I have] patients who say, ‘I drink so much water all day but I can’t quench my thirst.’ I have them add a green smoothie or two a day, and it changes everything,” she recounts.

Cohen’s own morning sip includes a handful of greens, half an apple (“an apple and a bottle of water is more hydrating than two bottles of water,” she notes), some lemon, and a knob of ginger.

Another way to stay hydrated? Fill your meals with even more thirst-quenching foods. These include foods that contain “structured” or “gel” water. Take cucumbers, for example: “When you look at a cucumber seed, you can literally see the gel around it,” Cohen notes. This happens when H20 molecules layer upon each other to form this watery, gel-like substance. “This form is found in nature, and the same form is within our cells,” Cohen adds.

That gel is what makes cucumbers the quintessential hydrating snack, she notes, along with chia seeds. You know when you add water to chia seeds and they form into a slimy glob? “Those are the stars of the hydrating show,” says Cohen. “Chia seeds hold on to that hydration much better than just plain bulk water alone.”

4. Drink A Glass Of Water Before Each Meal

A final rule of thumb, says Cohen, is to drink a glass of water before every meal. You don’t have to get too meticulous about it’ maybe pour yourself a glass or make a cup of tea while preparing your meals. “Just like a half an hour before every meal,” she notes. “That’s a great way to get some extra hydration in a day.” Pretty soon it’ll become a habit, like clockwork, and you won’t even need the reminder.