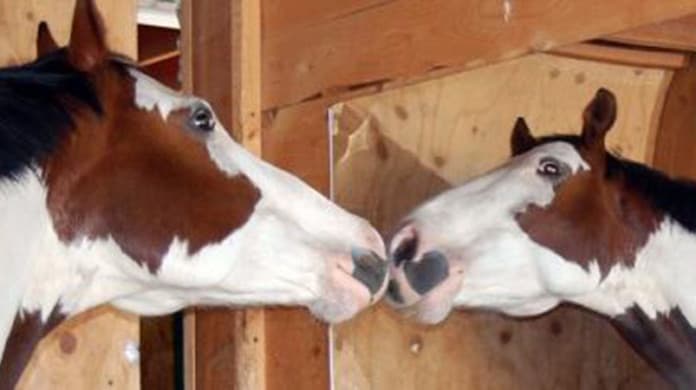 If you ask people to list the most intelligent animals, they’ll name a few usual suspects. Chimpanzees, dolphins and elephants are often mentioned, as are crows, dogs and occasionally pigs. Horses don’t usually get a look in.

So it might come as a surprise that horses possess an unusual skill, widely considered an indicator of self-awareness. In a recent study, researchers have found horses can recognise their reflections in mirrors.

Animals looking at a mirror for the first time often respond socially – they act as if their reflection is another animal. After a while, this social response tends to subside. Some animals lose interest at this point, but others will go on to explore the mirror and investigate how they can make the reflection move using their own body.

Once animals have stopped responding socially, scientists test their understanding using the “mark test”. The animal is marked in a location they’ll only be able to see in the mirror, perhaps on their forehead or ear. Then scientists watch to see if the animal spends more time touching this body part in front of the mirror when it’s marked than when it isn’t. If it does, this suggests the animal recognises its reflection.

This test was first used to demonstrate self-recognition in chimpanzees in 1970, and scientists have since used versions of the test to look for self-recognition in many other species. The results suggest that self-recognition is rare. Among non-primates, only a few individual animals have passed the mark test, including four Bottlenose dolphins, two Eurasian magpies and an Asian elephant.

But a new study by researchers in Italy has found evidence of self-recognition in horses. While we should be cautious about generalising from a single study, this suggests self-recognition might exist in horses as a species.

In the study, a large mirror was placed in a horse training arena. Once horses got used to the mirror and stopped responding socially, the researchers used the mark test to look for self-recognition, comparing the horses’ behaviour in two conditions. In one condition, researchers drew a cross shape on both of their cheeks using a colourless ultrasound gel. In the other, they were marked in the same way but with a coloured ultrasound gel.

The important question was whether the horses would be more interested in the visible marks than the invisible ones. And they were. The horses spent around five times longer scratching their faces in front of the mirror when they were visibly marked.

The researchers concluded that they saw the marks in the mirror, understood that those marks were on their own faces, and were trying to remove them. They recognised their reflections.

The mark test is often described as a test for self-awareness. But whether that’s true is debatable, and depends on what we mean by self-awareness – a tricky philosophical question.

When we say that a person is self-aware, we often mean they have a special insight into their own mind. Perhaps they know what they really want, or they’re aware of their personality flaws.

A few researchers have argued that self-recognition involves having a concept of oneself as a psychological agent with a mind. But that’s not a popular view, because recognising your reflection doesn’t seem to involve thinking about your mental states.

Self-recognition seems to have more to do with being aware of our bodies. Of course, even very simple animals are aware of their own bodies, even ones that don’t pass the mark test. But there are different ways of being aware of one’s body.

Some of our senses give us a special awareness of our bodies “from the inside”. For example, something called proprioception gives us information about the position of our bodies. When proprioception tells you you’re slouching, you don’t have to work out who is slouching – you just know immediately that it’s you.

But mirrors enable us to become aware of our bodies “from the outside”. When we see a body in the mirror, it’s not obvious that the body is ours – we have to work that out. I’ve argued that taking this external, objective perspective on ourselves and our bodies is another kind of self-awareness.

While this new study might not show that horses can reflect on their own minds, it does put them in the small group of animals who can think in an objective way about their own bodies. Perhaps it’s time to revisit our assumptions about horses. They may be much smarter than we think.