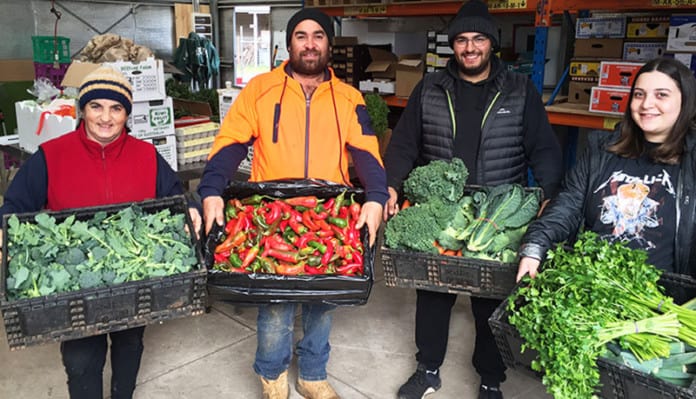 When the pandemic hit Australian shores just over 12 months ago, the immediate impact was felt hardest among vulnerable communities.  As businesses shut their doors, many people were left with reduced hours, or no work at all, and demand for charity food relief sky-rocketed. At the same time, food-based social enterprises were struggling to stay afloat. In an attempt to solve these adjacent problems, Moving Feast was born.

Led by STREAT, the project has brought together over 25 of the biggest names in the social enterprise community, including Melbourne Farmers Market, CERES, Common Ground Project and Fruit 2 Work, with each enterprise bringing their resources and expertise to create impact across three stages:

Back when the project first launched, Rebecca Scott, the CEO and co-founder of STREAT, said the intention was to not only provide immediate food relief, but equip people with the skills and knowledge to provide for themselves well into the future.

“What we want longer term is to have a just and sustainable food system, and for Melbourne’s backyards [to be] full of thriving vegie patches so families have their own food security, not just for this pandemic, but for what we know is going to be a very hard time in the future with climate change,” Scott said.

Seeds were also planted across 5,687 square metres of land in Melbourne suburbs, and the organisations involved mapped hunger and food insecurity across Victoria.

A Lifeline For Social Enterprises

With social enterprises not immune to the impacts of COVID-19, Moving Feast provided businesses such as Melbourne Farmers Market an opportunity to pivot their models.

Miranda Sharp, the founder and director of the Melbourne Farmers Market, told Pro Bono News that in pre-COVID times the market supported around 150 small farmers to sell their produce at seven markets across Melbourne.

“When COVID-19 first hit and we went into lockdown, four of our seven sites were closed to the public,” Sharp said.

But what Moving Feast provided, was an opportunity for the food that would normally be sold at markets, to go into emergency food relief packages instead.

“We were able to play a central distribution role, utilising one of our unused sites to channel about 10 tonnes of food directly from primary producers into emergency food relief,” she Sharp.

“It also meant that we could move people that would normally be selling out our markets into other channels, such as making food and making meals.”

Sharp said that while many of the enterprises involved in Moving Feast had previously collaborated informally, or admired one another from afar, the project was an opportunity to work together in an effective way for increased impact.

“Some of us already had great connections, but this really consolidated the intention and the value of what we are all trying to achieve separately,” she said.

“And I just think that we’re a really intrinsically optimistic group, because it’s not just about our own survival. Of course, our own needs are important, it’s why we are businesses, but our social purpose is clear, and we want to see value for everyone else in the mix as well.”

Entering The Next Phase

The landscape ahead of Moving Feast is looking vastly different from what it was 12 months ago.

The project is turning its attention to boosting a functional, small scale food system that “doesn’t try to do everything, but it tries to do what it does well.”

“For example, we want to create manageable regional food loops, where delivery trucks come into Melbourne as just one of their destinations, but then they continue their travels onto other parts of Victoria that might not have access to a direct supply,” she said.

“And then we build the capacity to then backfill that little transport system in the middle.”

A number of horticulturalists have also joined the Moving Feast team to train young people across various sites and social enterprises.

“Of course, 2020 presented a whole bunch of challenges, but I really think this project is full of possibilities,” Sharp said.