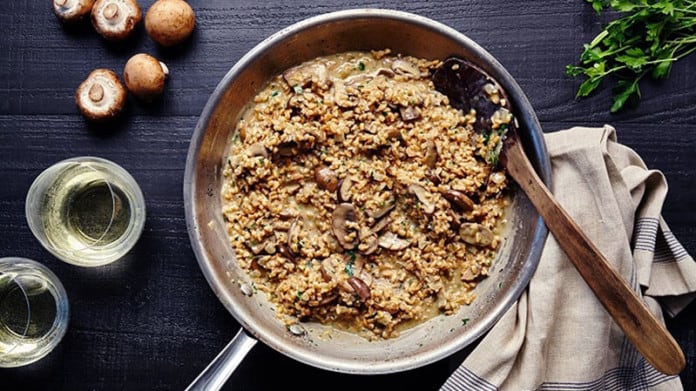 There’s a lot of buzz around about fibre, but it isn’t a singular nutrient. While all fibres are types of carbohydrates, there are several varieties. One example is beta-glucans—bioactive plant compounds that have been linked to gut, heart, and immune health.

We spoke with experts to help break down the benefits of beta-glucans, the science behind these unique plant fibres, and how you can get more of it into your diet.

Beta-glucans are a type of fibre found in the cell walls of certain yeasts, bacteria, fungi, algae (like seaweed), along with other plants like oats, barley, wheat, rye, and mushrooms. Beta-glucans serve as a source of energy and structure in these various plant species.

Most grain-based beta-glucans are soluble fibres, which means they dissolve in water and are typically fermentable (i.e., prebiotic) in your digestive tract. Beta-glucans from bacteria, fungi, and yeast however are typically insoluble in water.

More importantly, as a 2019 review in Molecules details, beta-glucans are a unique family of fibres that are biologically active, a characteristic that plays a role in their potent health benefits.

Beta-glucans can have far-reaching, beneficial effects on your wellbeing, touching everything from heart health to your immune system, gut, and blood sugar levels:

Kristin Gillespie, M.S., R.D., L.D., CNSC,explains that improved heart health is likely the most well-known benefit of beta-glucans. “Studies have identified improvements in total and LDL cholesterol levels with beta-glucan intake; and these lipids are among the top risk factors for heart disease,” Gillespie says. “The FDA has actually designated a heart-health claim for foods that are rich in beta-glucan based on this evidence.”The FDA heart-health designation is specific to a food-based dose of beta-glucans (i.e. 3 grams or more) from whole oats or barley, in the context of a diet low in saturated fats and cholesterol. And as these meta-analyses of randomized controlled trials demonstrate, the science backs the ability of beta-glucans (from oats and barley) to improve key heart-healthy lipids.

Linda Quinn, M.D., FAARM, calls beta-glucans “one of the most powerful immune-supporting phytochemicals.” The research indicates that these bioactive polysaccharides can positively affect your immune system in a few unique ways.In a comprehensive 2020 review published in Molecular Nutrition and Food Research, researchers examined the immune-support role of a specific type of beta-glucans (beta-1,3/1,6-glucans) from baker’s yeast (Saccharomyces cerevisiae) in preclinical and human studies to-date.The science demonstrates that beta-glucans have antioxidant properties and are potent immunomodulators: They help train and strengthen the innate defence functions of key immune cells like neutrophils and macrophages. These essential white blood cells help protect you from immunologic threats and infection.

Beta-glucans also help balance inflammation, a critical component of your body’s immune response. Finally, yeast-derived beta-glucans have been shown to have a protective and symptom-reducing impact on upper-respiratory-tract infections (URTI), such as colds and the flu.

Because certain beta-glucans (e.g., from oats and barley) are soluble fibres, they absorb water throughout the intestinal tract and bulk up stools, helping to promote regularity by improving constipation and diarrhoea. Beta-glucans also act as prebiotics, feeding the good bacteria in your gut and helping balance your gut microbiome.

In combination with inositol and digestive enzymes, beta-glucan has been shown to help improve gas, bloating, and abdominal pain in people with IBS and IBD.

Like other soluble fibres, beta-glucans can have positive effects on a key metabolic health parameter: your blood sugar. Collective data from randomised controlled clinical trials in those with diabetes demonstrates the ability of beta-glucans to improve blood glucose levels and glycaemic control as measured by HbA1c. (It’s important to note that these studies were using a hefty dose of 2 to 6 grams of beta-glucans over many weeks.)

While most of the studies on beta-glucans and ageing or life span have been conducted in animal models, longevity is another potential benefit worth mentioning. Again, the evidence is in its early, exploratory stages, but in one study published in Rejuvenation Research in 2020, researchers found that beta-glucans exerted anti-ageing effects on fish by promoting antioxidant activity, reducing oxidative stress, and helping fight off infection.

Of course, with the important role of beta-glucans in metabolic health and immunity in humans, one could extrapolate that these important plant bioactives may contribute to healthy ageing in us, too! More research will help to fully inform this hypothesis.

6. As Topical Treatments For Skin

While many of the benefits of beta-glucans come from consuming them, there may be some benefit to putting it on your skin too. In addition to its ability to permeate skin, potential mechanisms that make beta-glucans an excellent cosmetic candidate include its antioxidant, anti-wrinkle, and moisturising properties. There’s a relatively small amount of research on beta-glucans as a topical treatment. But some laboratory studies have shown that, when applied to both acute and chronic wounds, this plant fibre accelerated the healing process by controlling inflammation, contributing to the growth of new skin, and fighting off bacteria and other viruses that can cause infection.

What Are The Best Sources Of Beta-Glucans?

So, how do you make sure you’re getting enough beta-glucans in your diet? You can start with these high-fibre foods:

“Aside from consuming a bowl of oatmeal as we generally think of it, you can add oats to smoothies, protein shakes, or baked goods to increase your beta-glucan intake,” recommends Gillespie. “Oat flour can be utilised in place of regular flour in baking. Barley is also rich in beta-glucan; so consider utilising pearl barley in place of other starchy side dishes, such as rice.”

Quinn recommends combining different sources of beta-glucans, or “bundling it for the boost,” so you can benefit from the synergy of plant phytochemicals. “Pack your smoothie with multiple mushrooms and fruit rich in antioxidants, such as blueberries or dark cherries, to mask the intense mushroom flavour,” she says. “Soups are another easy way to consume beta-glucans.”

The Science: How Beta-Glucan Provides Benefits

How exactly do beta-glucans work? Well, it depends on the health benefit we’re talking about. For immune health, beta-glucans are antioxidant immunomodulators that help train our innate immune defences and balance inflammatory responses.

For gut health and cardiometabolic benefits (i.e., lowering cholesterol and improving glycaemic control) from oats and barley, the biological mechanism is rooted in the fact that they’re soluble fibres. This means beta-glucans pull in water from the gut and form a viscous, gel-like substance, slowing down the transit of foods (and absorption of their components, like glucose and cholesterol) through your digestive tract.

“This is how it regulates blood sugar levels, as sugar gets absorbed into the bloodstream more gradually,” says Gillespie. “Beta-glucan is also indigestible by the body; this means that it passes through the GI tract without being broken down and absorbed. As it travels intact through the GI system, it can carry excess lipids, like cholesterol out with it.”

Are There Any Potential Side Effects?

There’s a lot of existing foundational science and future promise surrounding the health benefits of beta-glucans. Supplementation research using beta-glucan concentrate or extracts is an active area of growing research, especially for immune health, in children and adults.

Beta-glucans are very well tolerated and have a strong record of safety. In clinical studies using beta-glucans from oats or barley, no adverse side effects have been observed in children or adults. And the same safety has been shown across the life span for beta-glucan extracts from yeast too.

One potential drug-nutrient interaction to mention is immunosuppressants. Because beta-glucans promote and stimulate the immune system, a person on immunosuppressant drugs should discuss any plans to significantly increase their beta-glucan intake with their health care practitioner. Of course, it’s always a good idea to consult with your doctor before making any major lifestyle changes, especially if you take any medication.

Beta-glucans are unique plant fibres that have been connected to better gut health, increased immunity, and improved cardiometabolic health parameters. Oats, barley, yeast, and mushrooms are the primary food sources of beta-glucans, but you can also use them in supplemental form for a targeted approach.

*For more information and full article, please visit the below website.
www.mindbodygreen.com