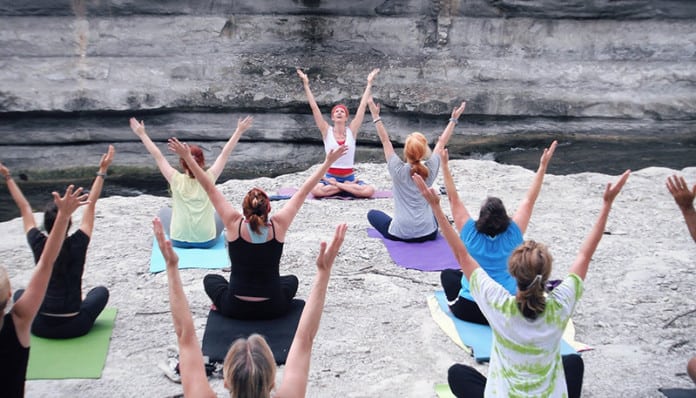 Practices such as yoga and tai chi have commanded a following for thousands of years, but the mass, worldwide adoption of mindful movement is a relatively recent phenomenon. Over the last couple of decades, many of these ancient or long-standing practices have been co-opted by the world of fitness, and adapted to appeal to modern gym-goers. Alongside this trend, our concept of exercise and fitness is also evolving—from workouts characterised by pounding, pumping, fat burn and muscle-building toward more deliberate, mindful modules focused on toning, balance, flexibility, alignment and breath.

Yoga, Pilates and Barre have become exercise staples from high-end comprehensive gyms to local halls, their rising popularity has spawned independent studios and branded chains all around the world.

In Move to be Well: The Global Economy of Physical Activity, GWI researchers have defined mindful movement and provided the first-ever global and country-level data on this popular and fast-growing wellness segment.

What Is Mindful Movement?

Mindful movement includes activities such as yoga, tai chi, qigong, Pilates, stretch and barre, as well as other less mainstream somatic, bodywork, and energy-based methods such as Gyrotonic and Gyrokinesis, Nia Technique, Feldenkrais Method, and 5Rhythms.

While these classes are increasingly offered at gyms and fitness studios as part of a comprehensive fitness class offering, consumers usually turn to them with the intention of improving mind-body health and mental focus, and for stress-relief and mindfulness – in addition to physical exercise.

How Big Is The Mindful Movement Market?

GWI estimates that 3.8% of the world’s population participates in mindful movement activities on a regular basis, with a total spending of $29.1 billion in 2018. Worldwide, people participating in mindful movement spent an average of $101 per year in 2018. This spending level may initially seem low when one considers that the cost of a single yoga or barre class can range from $10–30 in many specialised studios and full-service gyms around the world, and the cost of equipment-based Pilates training is even higher.

However, it is important to keep in mind that the rapidly rising popularity of mindful movement practices has been accompanied by a proliferation of ways in which to participate – in addition to the thousands of chains and independent yoga and barre studios and classes in comprehensive gyms, there are now classes in YMCAs and local community halls/centres, streaming apps, books and instructional DVDs and so on. This is especially the case with yoga. A significant portion of the growth in yoga practice worldwide is in online, at home, and low-cost methods of practising, which is expanding access and lowering cost barriers to participation.

What Is Driving Growth In The Mindful Movement Market?

There are several factors underlying the rapid proliferation of mindful movement and mind-body practices. Our fast-paced, stressful modern lives are fuelling the demand for slower-paced, mindful movement and exercise. Among the overworked, sleep-deprived and anxiety-ridden, as well as those who suffer from chronic pain and disease, many are seeking relief in exercise, physical activities and non-medical solutions.

Across the board, there is growing interest in, and increasing recognition of, the importance of mind-body health. Emerging scientific and clinical studies are offering preliminary endorsements of the efficacy of yoga, tai chi, Pilates, and other mindful movement practices in the mitigation of hypertension, back pain, anxiety and depression, cognitive decline, fall risks in older adults, and other health conditions.

While some mindful movement practices have deep and ancient roots, many people are attracted to the physical and mental benefits they experience from these practices and do not necessarily subscribe to the underlying spirituality, philosophies and systems (e.g., Hinduism, Ayurveda, Taoism, Buddhism, chakra, chi, energy flow, etc.). Purists may cringe at the proliferation of “power vinyasa yoga” and “yogalates,” but the mainstreaming of these long-standing practices has created a powerful intersection between the fields of exercise/fitness and mental wellness. This growing intersection also brings other benefits, such as drawing more attention to breathing, balance, alignment, posture, injury prevention, recovery and healing in the fast-paced world of fitness.

*NOTE: Meditation is not included in GWI’s measurement of the mindful movement market. While meditation occupies an important place along a continuum of mind-body health modalities, this particular study and dataset focussed on physical activity. We have specifically chosen to use the terminology mindful movement to describe this segment of physical activities in order to emphasise the ‘movement’ component and avoid confusion (since many people associate the term mind-body with meditation).

*For more information and references, please visit the below website.
www.globalwellnessinstitute.org