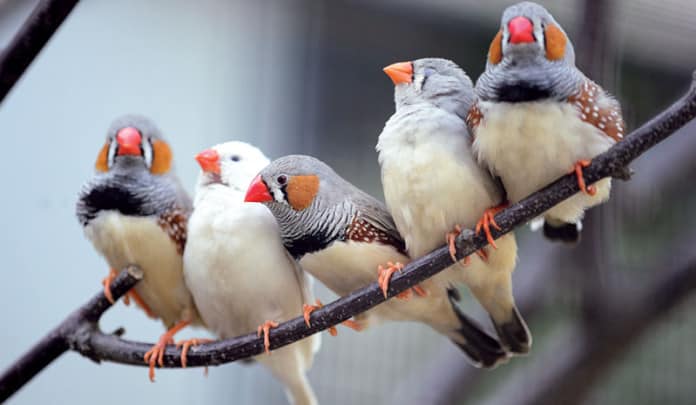 If you have ever been moved by the beat of a drum or enchanted by a song, or if you have meandered through YouTube to watch animals from elephants to dancing cockatoos swaying and bopping to music, you might suspect that there is an instinctive and primal connection to musical rhythms that humans share with many animals.

In a study published in the Proceedings of the National Academy of Sciences, a collaborative team of Tufts University biologists and psychologists looked at how birds perceive songs and found that, like humans, zebra finches can recognise songs by their rhythmic patterns, even when played at very different tempos.

Given the growing evidence that rhythmic timing problems are associated with a number of childhood language disorders, including dyslexia, stuttering, and developmental language disorders (formerly known as specific language impairment), having an animal model of human rhythmic processing could be helpful in understanding how it is linked to vocal communication in the brain, according to the researchers.

A recent published study by the authors explored using zebra finches as models for understanding stuttering in humans.

The discovery could also provide insights into movement disorders. “Rhythm perception in humans involves complex neural connections between the parts of our brain that perceive sounds and the parts that control movement,” said Andrew Rouse, corresponding author of the study, who recently earned his Masters in Psychology at Tufts.

“It’s one reason why rhythm is such a strong stimulus in the desire to dance, but it also suggests that movement disorders like Parkinson’s disease and speech disorders such as stuttering could have links to the same auditory-motor networks in the brain.”

“It is important to note that musical rhythms can facilitate more natural movement in patients with Parkinson’s disease,” added Mimi Kao, assistant professor of biology at Tufts and co-author of the study.

“An animal model that can process rhythm patterns could help us understand why that happens.”

Current evidence suggests that rats, which are biologically more closely related to humans and used as models for many human diseases, don’t seem to have flexibility in rhythm perception.

They might recognise a sequence of notes, but only at one tempo. Yet the researchers found that zebra finches can recognise songs more by rhythmic patterns than specific time intervals. They can recognise the pattern of the beat whether it is played fast or slow.

The researchers suggest this is because the zebra finches have special brain circuitry for learning and processing complex sound sequences and may actually be a better model for studying the neurobiology of human rhythm processing.

The study authors suggest that the ability to learn patterned vocalisations could be linked to rhythm perception, and there are varied levels of ability to do so across species. For example, birds that can learn new vocalizations throughout life (‘open-ended learners’) should outperform those whose song learning is limited to their youth (‘closed-ended learners’) when discerning rhythms.

Some birds, like canaries, vary in their vocal learning abilities seasonally, and others, like finches, may have one gender with more pronounced vocal learning capabilities than their mates. They too, would differ in their ability to learn new rhythm patterns.

Other species predicted by the authors to be better performers at rhythm detection are Alston’s singing mice, marmosets, and Japanese macaques, which engage in call and response vocalizations with others of their species; vocally flexible harbour seals; and bats that alter the timing of their vocalizations to produce regularly spaced clicks for echolocation.

Birds with particularly strong capabilities in learning vocalizations, including those that can mimic a wide range of sounds and human speech — like parrots, ravens and cockatoos – may have very well-developed brain regions that link auditory and motor neural networks and identify not just rhythms but also complex and varying beat sequences. Many birds that don’t have a singing repertoire, like pigeons, perform poorly when learning rhythm sequences.

“Zebra finches and possibly other species with flexible rhythm perception and specialised auditory-motor forebrain regions will allow fine-grained, circuit-level measurements and manipulations to give us clues to the neural architecture of speech and regulated movement in humans,” said Tufts psychology Professor Aniruddh Patel, also a co-author of the study.