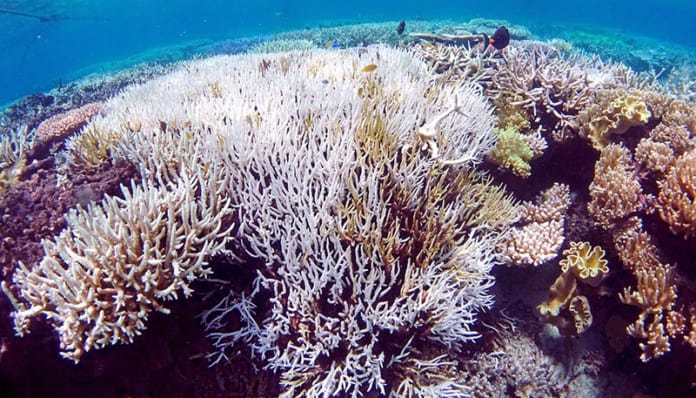 Some coral communities are becoming more heat tolerant as ocean temperatures rise, offering hope for corals in a changing climate.After a series of marine heatwaves hit the Phoenix Islands Protected Area (PIPA) in the central Pacific Ocean, a study found that the impact of heat stress on the coral communities lessened over time.

While a 2002-2003 heatwave devastated coral communities in PIPA, the reefs recovered and experienced minimal losses during a similar event in 2009-2010. Then, in 2015-2016, a massive heatwave put twice as much heat stress on the corals, yet the die-off was much less severe than expected, according to new research published in Geophysical Research Letters, AGU’s journal for high-impact reports with immediate implications spanning all Earth and space sciences.

The authors of the new study suspect heat-tolerant offspring from the surviving corals are repopulating the reefs, allowing the community to keep pace with warming seas – at least for the time being.

“It’s easy to lose faith in coral reefs,” said first author Michael Fox, a postdoctoral scientist and coral reef ecologist at the Woods Hole Oceanographic Institution (WHOI). “But in PIPA, which is protected from local stressors, and where reefs have enough time to recover between heatwaves, the coral populations are doing better than expected.”

Just like on land, heatwaves underwater are becoming more frequent and intense as the world warms, putting stress on ocean ecosystems. High temperatures hit coral reefs especially hard by causing widespread bleaching events, where corals eject the symbiotic algae in their tissues, further weakening the animals. With continued ocean warming, coral reefs were thought to be facing a dim future.

In a new study however, researchers monitored coral communities at four islands within PIPA, an area encompassing over 400,000-square-kilometers of coral reef and deep-sea habitat. The Republic of Kiribati established the reserve in 2008, and the United Nations Educational, Scientific and Cultural Organization (UNESCO) designated PIPA as a World Heritage Site in 2010. “The protected area gives us a rare opportunity to study pristine and isolated coral reef ecosystems, a privilege for which we thank the people of Kiribati,” said co-author Anne Cohen, a marine scientist at WHOI.

The team used daily satellite data and temperature loggers to examine how each heatwave impacted the corals. They ruled out 11 environmental factors that might explain the higher-than-expected survival following the 2009-2010 and 2015-2016 heatwaves, such as greater cloud cover or more gradual warming.

After the 2002-2003 heatwave, the surveyed sites lost more than three-quarters of their coral cover. The reef was beginning to recover when the 2009-2010 heatwave hit, sparking fears of widespread bleaching, but two years later, coral cover had increased by more than 5%.

Following the “Super El Niño” in 2015-2016, which raised ocean temperatures by 3 degrees Celsius (5.4 degrees Fahrenheit), the loss of coral cover was 40% – about half of the 2002 losses, despite causing twice the level of thermal stress.

A Source of Hope for Coral Reefs

Many of the reef-building species survived the heatwaves. “We’re seeing areas that were devoid of corals after 2002-2003 that are now flourishing with most of the original species,” Fox said.

At other reefs worldwide, sometimes only a handful of especially hardy or fast-growing species recover after a bleaching event. Coral larvae can float long distances on ocean currents, but due to PIPA’s isolation, the researchers hypothesise that local heat-tolerant individuals are repopulating the reefs.

Now that the researchers have shown that some coral communities have the potential to keep up with ocean warming, their next step is to figure out how they are doing it.

The findings are “important for giving us hope for the future of coral reefs, and also for helping to maintain support for protecting reefs, including efforts to reduce local threats, like pollution, sedimentation and overfishing that undermine the reefs’ ability to adapt,” said Lizzie McLeod, the Global Reef Systems Lead at the Nature Conservancy.

She recommends reef conservationists prioritise the conservation of heat-tolerant reefs, because they can act as climate refuges that repopulate other sites decimated by heatwaves.

The study’s authors caution that even these remarkable corals have their limits and reversing climate change remains paramount. As heatwaves become more frequent or intense, even heat-tolerant communities could die out.

“We’re in a race against time, so anything that increases the chances that corals are going to make it is really good news,” said Nancy Knowlton, the Sant Chair in Marine Science Emerita at the Smithsonian National Museum of Natural History, who was not part of the study. “The corals are doing their part,” she said. “We have to do ours.”
www.sciencedaily.com