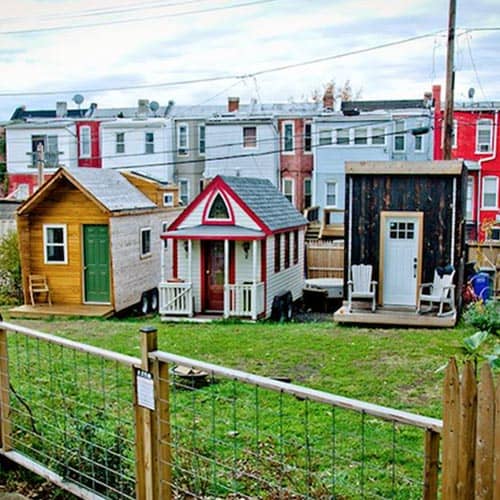 A pair of non-profits are housing homeless people in tiny sustainable homes in the backyards of charitable volunteers who decide to host them.

The Seattle-born partnership hopes to replicate the “cultural shift” brought about by Airbnb to tackle the homelessness epidemic in the Pacific Northwest, as well as introduce concepts of sustainable housing to thousands of charitable residents who have offered up their backyards.

After befriending a homeless resident outside of his architecture studio, Rex Hohlbein transitioned his career towards helping others by starting the BLOCK Project—its name playing on the words for neighbourhood, and for the shape of the tiny houses he would pioneer.

Seattle has the dual problems of expensive real estate and the third-largest homeless community in the country, which led Hohlbein to reason that kindly neighbours could have a much better impact than waiting for a big-budgeted government program.

He founded BLOCK, along with Facing Homelessness. The latter would find backyards in which the former could build small, low-emission housing, and the government stepped in to make the process as legally expedient as possible.

Zoning laws already allowed for “accessory dwelling units” to be present on existing properties, and to ensure there’s no impact on property tax for those volunteering their backyards, and the non-profits sign five-year leases for the tiny houses.

“Airbnb, the idea of a complete stranger staying in your house while you’re sleeping—that’s crazy,” Hohlbein told Fast Company. “I’m old enough to know the time before Airbnb, and that thought was just ludicrous. And now nobody thinks about it. So we believe that the same kind of cultural shift will happen with the Block Project.”

Facing Homelessness evaluates possible volunteers’ yards to see if they fit, and they check out volunteers themselves.

Then they play matchmaker and pair the house, the unhoused, and the property owners together—providing support to help the unhoused individual achieve specific goals, whether that’s job training or sobriety.

Their first match was a slam dunk. The first tiny home owner was 74 when he first moved in, and has become such a close part of the property owners’ life, it’s likely he will remain there until the end of his days.

The 125-square feet houses from BLOCK Project are modular, and the panels are pre-fabricated, allowing for both the manufacturing and the assembly to be much quicker. They also introduce smart systems like rain-water catching and solar panels, and come with a little bit of furniture, a hot plate, and a bed.

So far thousands of Seattle residents have registered their properties under the BLOCK Project, and fundraisers ensure everyone gets a “Welcome to the Neighbourhood” gift bag with pots, pans, shampoo, towels, bed linens, and more.