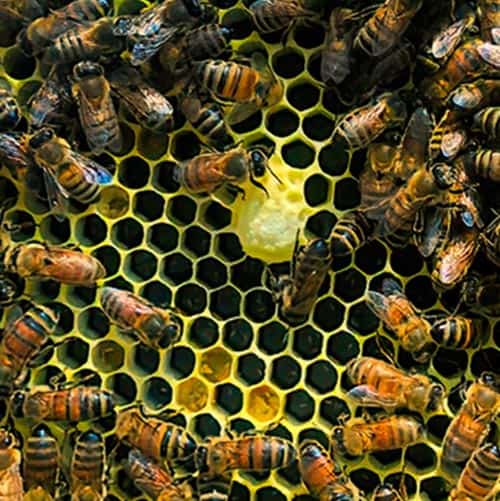 The study, published in Science Advances, demonstrated that honeybee colonies respond to infestation from a harmful mite by modifying the use of space and the interactions between nest mates to increase the social distance between young and old bees.

Co-author Dr Alessandro Cini (UCL Centre for Biodiversity & Environment Research, UCL Biosciences) said: “Here we have provided the first evidence that honeybees modify their social interactions and how they move around their hive in response to a common parasite.

“Honeybees are a social animal, as they benefit from dividing up responsibilities and interactions such as mutual grooming, but when those social activities can increase the risk of infection, the bees appear to have evolved to balance the risks and benefits by adopting social distancing.”

Among animals, examples of social distancing have been found in very different species separated by millions of years of evolution: from baboons that are less likely to clean individuals with gastrointestinal infections to ants infected with a pathogenic fungus that relegate themselves to the suburbs of anthill society.

The new study evaluated if the presence of the ectoparasite mite Varroa destructor in honeybee colonies induced changes in social organisation that could reduce the spread of the parasite in the hive. Among the stress factors that affect honeybees, the Varroa mite is one of the bees’main enemies as it causes a number of harmful effects at individual and colony level, including virus transmission.

Honeybee colonies are organised into two main compartments: the outer one occupied by the foragers, and the innermost compartment inhabited by nurses, the queen and her brood. This within-colony spatial segregation leads to a lower frequency of interactions between the two compartments than those within each compartment and allows the most valuable individuals (queen, young bees and brood) to be protected from the outside environment and thus from the arrival of diseases.

By comparing colonies that were or were not infested by the Varroa mite, the researchers found that one behaviour, foraging dances, that can increase mite transmission, occurred less frequently in central parts of the hive if it was infested.

They also found that grooming behaviours became more concentrated in the central hive. The researchers say it appears that overall, foragers (older bees) move towards the periphery of the nest while young nurse and groomer bees move towards its centre in response to an infestation, to increase the distance between the two groups.

Lead author Dr Michelina Pusceddu (Dipartimento di Agraria, University of Sassari) said: “The observed increase in social distancing between the two groups of bees within the same parasite-infested colony represents a new and, in some ways, surprising aspect of how honeybees have evolved to combat pathogens and parasites.

“Their ability to adapt their social structure and reduce contact between individuals in response to a disease threat allows them to maximise the benefits of social interactions where possible, and to minimise the risk of infectious disease when needed.

“Honeybee colonies provide an ideal model for studying social distancing and for fully understanding the value and effectiveness of this behaviour.”